Art of Faith I: Christianity

Art of Faith I is a sumptuous high definition visual experience exploring the architecture and art of Judaism, Christianity and Islam presented and narrated by the broadcaster John McCarthy. The three-hour-long films travel the world visiting the greatest and most significant religious buildings, exploring how the passions and complexities of religious beliefs have been expressed in architecture.

In this one-hour film, Christianity looks at the diverse range of Christian worship and asks, what do these special places reveal about those who built them and those who created extraordinary artworks for them? What feelings do they prompt in those who work and worship there now? And how do these extraordinary buildings both shape and respond to the faith that is affirmed within them every day?

In Britain, we’re familiar with thousands of parish churches, all different and distinct but almost all variants of a single pattern. But across the world, there’s an astonishing variety of buildings, ancient and modern, humble and grand, that are sacred to Christianity.

More than mosques and synagogues, Christian places for praise and devotion have been created in every conceivable size and shape. And often their form is a function both of the historical moment when they were first built and of the particular beliefs of those who worship within them. Art of Faith travels to Christian places of worship in France, Egypt, England, Italy, Russia, the US, and the Vatican.

St Catherine’s monastery, Egypt
Constructed in the remote desert at the foot of Mt Sinai, St Catherine’s monastery is the oldest continuously inhabited Christian monastery in the world. Its history stretches back to the later third century CE. The early Christians believed that this was the place where God spoke to Moses at the Burning Bush. they built a chapel next to what they picked out as the Bush, and this later became the heart of the monastery complex.

Durham Cathedral, England
Begun soon after the 1066 Norman invasion, the cathedral was built to house the bones of St Cuthbert who died in 687 CE. Two earlier cathedrals on the site had also been constructed for this, but the Romanesque nave of the current house of worship, with its thick walls, sturdy columns and geometric decoration, was completed in 1135.

Chartres, Cathedral, France
One of Europe’s greatest Gothic cathedrals. Its spectacular west front was almost the only part of an earlier cathedral to survive a fire in 1194. Every other area was entirely rebuilt in the following three decades. Thin walls and large windows, filled with glorious stained glass, are made possible by flying buttresses outside and pointed vaulting outside.

Chapel of Our Lady of the Rosary, France
Living in the south of France in the early 1940s, the artist Henri Matisse was cared for after cancer surgery by a devoted nurse. When she became a Dominican nun, she asked him to help design a chapel for the sisters in Vence. Working closely with the priest Father Couturier, Matisse spent more than four years conceiving and creating every element of the chapel’s decoration. Matisse designed the ceramic walls and floor, the stained glass, the murals, the furnishings and even the robes for the priests.

Basilica of San Vitale, Italy
San Vitale was only half-built when in 540 CE the army of the Byzantine emperor Justinian captured the Roman town of Ravenna. Over the next two decades, the Byzantines completed the church, which has one of the world’s greatest collection of medieval mosaics, including the glorious mosaic portraits of Justinian and his empress Theodora.

St Basil’s Cathedral, Russia
Missionaries from Constantinople to Russia had won converts to Christianity and the Orthodox Church from the ninth century onwards. By the fifteenth century the Russian Church had achieved a form of independence. A century later the leader of Russia known today as Ivan the Terrible commissioned from the master architect Yakovlev what is today the best-known cathedral in the Russian Orthodox tradition and an icon of Moscow.

Chapel of St Ignatius, USA
At the end of the twentieth century, the architect Steven Holl designed a chapel for the University of Seattle. His controversial conception was of “seven bottles of light in a stone box”, with the physical and spiritual spaces of the chapel defined by colour and light.

St Peter’s Basilica, Vatican City
The construction of St Peter’s Basilica as it is today began under Pope Julius II in 1506. Bramante was the chief architect for a time, as was Michelangelo. It was finally consecrated in 1626. the site is believed to be that of the martyrdom and the tomb of St Peter. Above the tomb today is an elaborate Baroque canopy designed by Lorenzo Bernini. The basilica is the home to many extraordinary works of art, including most famously the Pietà by Michelangelo.

Be the first to review “Art of Faith I: Christianity” Cancel reply 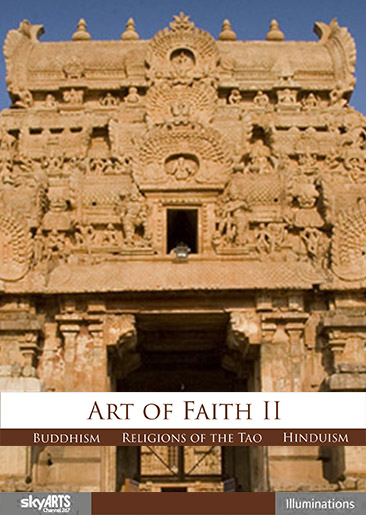