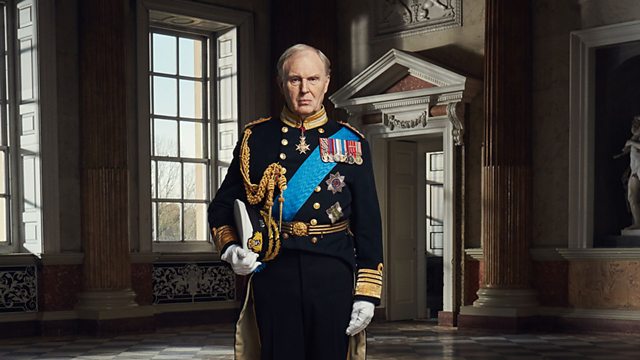 On Wednesday night BBC Two broadcast Rupert Goold’s film of King Charles III with a script by Mike Bartlett. It is on BBC iPlayer for the next four weeks, and if you watch nothing else in that time, make time for this. It’s a wonderful 90 minutes of beautifully achieved, bold, provocative, innovative, smartly subversive television, with a glorious performance from the late Tim Pigott-Smith at its heart. The plaudits have poured in, as I have little doubt they will continue to, and among the thoughtful press responses perhaps the most thoughtful is that by Mark Lawson for the Guardian. (Perhaps the most bizarre is ‘The BBC’s King Charles III inevitably contained plenty of howlers’ for – surprise! – the Mail, although treating the fantasy as a docu-drama is some kind of compliment.) Apart from expressing close-to-boundless enthusiasm for the film, I want here just to add a couple of thoughts about its status as television.

Obvious as this point may be, there is something very special about King Charles III being shown on BBC Two. The exact same film could have been made available on Netflix (like The Crown) or on Sky Arts or on Channel 4 or even ITV, and it would not have carried the same charge or the same meanings. For ever since at least the Coronation in 1937 of George VI, the 80th anniversary of which is celebrated today on BBC Parliament, there has been a special relationship between King (or Queen) and Corporation. The BBC, or rather its licnesed jesters, may on occasions make a joke or two about the monarchy. It may even broadcast – in a marginal slot or by a marginal figure – the occasional critique. But fundamentally the BBC expresses a profound respect for the institution and each of the individuals that embody it.

But the relationship between King (or Queen) and Corporation is complex and multi-stranded, grounded in shared dependencies. Nor is it in any sense confined to news and current affairs programmes, but rather echoes and bounces around across many elements of the schedule. I recently published an essay, for example, about the monarchy and BBC Television’s presentation of Shakespeare’s History plays between 1957 and 1965. (You can find it in the excellent collection The New Elizabethan Age: Culture, Society and National Identity after World War Two, edited by Irene Morra and Rob Gossedge, from I.B. Tauris.) There I argued that, ‘The BBC’s productions of Shakespeare’s history plays contributed to the process of “getting closer” to the monarch, to developing a presumed intimacy with the second Elizabeth and to working through a national relationship with her and the institution she represented.’

And now in 2016 we have the BBC using Shakespeare – or rather a contemporary playwright channelling Shakespeare – to develop a fantasy about what might happen after the death of Queen Elizabeth II when the not-yet-crowned King Charles listens to his liberal conscience and refuses royal assent to a government bill restricting freedom of the press. Except that – and this is crucial – it’s not really the BBC doing so. For as Radio Times, programme trails, press information and an on-air announcement just before transmission made abundantly (and appropriately) clear, King Charles III was adapted from a theatre play and an Almeida production that had already been seen over 400 times London and New York.

Precisely because it was based on a pre-existing theatre play (which, by implication, the BBC had had nothing to do with commissioning or nurturing originally) King Charles III could be a prestige production by and for the Corporation and yet one that it did not exactly or entirely author or own. The theatrical origin allowed the film to be funded and shown with its strikingly subversive elements intact*, including portraying William as vacillating, Kate as a conniving minx and Princess Diana popping up to predict how things would fall out (* or almost so; see Mark Lawson on aspects of the play’s politics).

Would BBC Drama have directly commissioned and brought to the screen King Charles III as a Corporation original? Maybe, maybe not (and I think I think the latter).

Mike Bartlett’s dazzling use of cod Shakespearean blank verse and of recognisable characters from the plays (Harry as Prince Hal, Kate as Lady Macbeth, etc) means that a similar sleight-of-hand is played with the status of the drama. The cast under Rupert Goold’s direction embodied Charles and Camilla and the rest, often with uncanny resemblances, so that they seemed to exist both in our world and in one parallel that is as much a medieval fantasy as Game of Thrones. The tension between the two worlds is one reason why the drama is so compelling and also so original.

Rare is the single television programme that changes fundamentally anyone’s understanding of the world. But each programme of any worth or power can contribute significantly to each of our individual politics and our world views. After watching King Charles III as a film (and this is far more the case than when I saw the theatre production) my sense of the royal family, of the British (non-)constitution and of the potential of filmed drama is simply richer and deeper. I am genuinely not sure whether I am more or less of a republican – and that too is to the credit of the production, and especially to Tim Pigott-Smith’s Charles. But I do know that when the nation is plunged into mourning we would all do well to watch the Duchess of Cambridge very closely indeed.