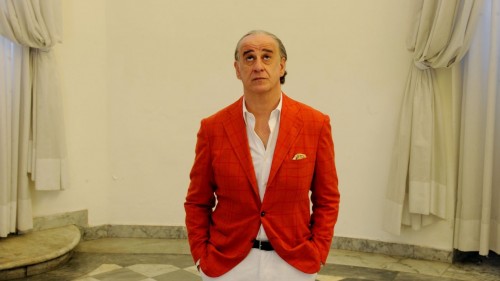 To conclude our 2013 round-up, and before we get to the business of 2014 over the weekend and next week, this is our final ‘top ten’ of the year. Let’s hope that the new year can offer as rich a range of experiences.

Unsurprisingly Paolo Sorrentino’s panorama of modern Rome (above, with Toni Servillo) has featured in the ‘tens’ by Linda and by Keith, and in many other end-of-the-year round-ups. I saw the film on a Sunday afternoon from the front row of one of the small screens at Clapham Picturehouse – and I was completely overwhelmed. Visually, aurally (part of the score is by Zbigniew Preisner), this is great and glorious cinema…

… as is Alfonso Cuarón’s astonishing space adventure. Back in November I posted a clutch of links for those interested in learning more about the film, its production and reception. Including it here also gives me an excuse to feature the 2-D trailer once again.

Number three, and I realise that each of these experiences has been courtesy of the Clapham Picturehouse. I missed Nick Hytner’s near-definitive production in the theatre but was more than satisfied by seeing it in the NTLive broadcast. For me, it’s the very best to date of the cinema shows from the National Theatre, and I was thrilled to work with the screen director Robin Lough on the RSC’s Live from Stratford-upon-Avon presentation of Richard II a few months later.

I have watched a *lot* of US television this year – and in this I’m not alone. Nashville and The Good Wife were two great favourites, and their imminent returns to More4 are highly anticipated at home. I also loved both series of Scandal which takes its narrative at such a break-neck pace that everything afterwards seems just a little slow and sluggish. Certainly when I finally sat down this Christmas to binge my way through the first series of the Netflix House of Cards, this felt far less inventive and engaging, and indeed – despite Kevin Spacey -almost dreary by comparison. Yet my heart this year has belonged to Carrie and Saul and Brodie. I ignored the nay-sayers and kept the faith during the recent third series of Homeland and was rewarded by a final four shows that bore comparison with the very finest of the show to date. This is the US trailer for the final episode… this is about redemption.

British television also offered a number of exceptional drama series this year, including Channel 4’s Utopia and the desperately dark Southcliffe and the HBO-BBC co-production Top of the Lake directed by Jane Campion. But as straightforward make-a-date Monday night viewing, this detective mystery with David Tennant and Olivia Colman was hard to beat. Beautifully plotted and scripted, it was also directed by James Strong and Euros Lyn with a fine eye for the eccentric beauties of the British seaside (kudos also to cinematographer Matt Gray). And I have little doubt that the about-to-be-filmed US version will (finally) confirm David Tennant’s star status on the other side of the pond.

I programmed this 1980 BBC film of John Ford’s 1623 drama in a season of Jacobean tragedy on television that with the Screen Plays research project I curated for BFI Southbank. I recalled being deeply impressed by Roland Joffé’s adaptation thirty-plus years ago, and it proved to be – I use the word carefully – a masterpiece. I wrote about it here – and our hope now is that it can become the second release in our Screen Plays series of DVD releases of classic plays, following on from our recent issue of An Age of Kings.

I wrote back in June about this wonderful exhibition in Chichester of the forty or so of the roughly seventy drawings and paintings that the artist made as studies of surgeons and nurses in and around operating theatres between 1947 and 1949:

Little-known and comparatively uncelebrated, at least in comparison to the artist’s sculptures, these are beautiful and powerful works – personal, gloriously human yet with strong elements of the impetus to abstraction. For all their modesty, they can also be seen as one of the few truly great cultural celebrations of the achievements of post-war Labour government.

In the wake of the Richard II broadcast, I snuck off to Paris for a day of treats, of which this compendious retrospective was undoubtedly the highlight. Braque has always suffered by the inevitable comparison with Picasso, but this show demonstrated what a brilliantly inventive painter he was both just before and long after his hot-house Cubist period with the Spanish master.

This is a great exhibition of truly great works – and you have until 19 January to catch it. Pretty much every piece here, from the small to the very big, makes you catch your breath in wonder. The presentation is serious and, when compared to other V&A extravaganzas this year, comparatively low-key, and everything is immaculately displayed, which is no small feat, given the complexity and fragility of many of the pieces. I spent a full afternoon lost in the show’s riches and in the worlds that many of them offer to the viewer.

10. Dombey and Son by Charles Dickens

As for worlds in which I got completely lost there was little to beat across the past few months my first reading of Dickens’ enthralling novel of mid-nineteenth century London. I gasped and I laughed and I cried, at times – such as on a train from Cardiff to London – rather copiously. There were times when I wondered why I read any fiction apart from Dickens. Magnificent.