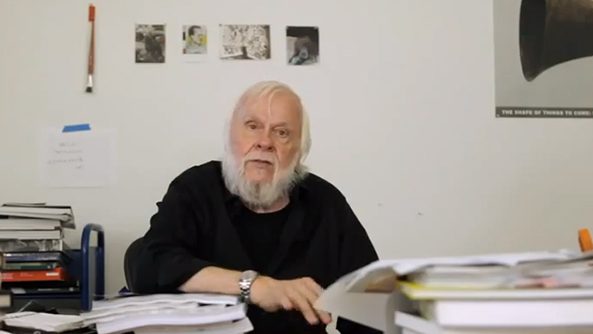 For the last few years I have been invited to give a group of classes for the Royal College of Art’s Critical Writing in Art & Design MA programme. Across four weeks a group of super-smart students help me explore some issues about the history of television and the current state of digital media, mostly as they relate to the visual arts. For the final class, course tutor David Crowley and I ask the students to contribute a short film or fragment of online media about the arts that they find distinctive or stimulating or especially engaging (or all three). Following are three pieces put forward today, plus a perennial favourite with Ice Cube.

A Brief History of John Baldessari

Tom Waits narrates this dazzling brief bio of the LA-based artist (pictured above in the film). Directed by Henry Joost and Ariel Schulman, the makers of Catfish who work collectively as Supermarché, this was produced for the Los Angeles County Museum of Art’s inaugural Art + Film gala.

The Simpsons: Mom and Pop Art

Breathless brilliance as Homer and Marge go to the local museum ‘where the elite meets Magritte’. There is an extensive Wikipedia entry solely dedicated to the episode from which this extract comes.

Jonas Mekas: As I was Moving Ahead, Occasionally I saw Brief Glimpses of Beauty

An exquisite montage of fragments from the visual diaries of the great Lithuanian-American filmmaker Jonas Mekas.

Made alongside the Pacific Standard Time: Art in L.A. 1945–1980 initiative in 2011-12, this has rapper, songwriter, record producer, actor and filmmaker Ice Cube reflecting on Los Angeles and introducing the Eames House, otherwise known as Case Study House no 8. Perhaps the coolest film about architecture ever made.