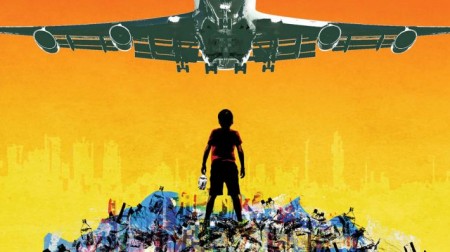 For the end of 2015, when this blog has been less than it should have been, and for the start of 2016, when we intend it to be more than it has been, we offer five short lists of five cultural highlights from the past year. Each of the five of us at Illuminations is contributing five things, whether movies, television series, books, exhibitions or whatever, that have meant something significant to us during the year. The final choice is Louise Machin‘s, again offered in no particular order.

• Behind the Beautiful Forevers, National Theatre

Depicting the endless grind of Mumbai slum life, this is a beautifully spirited adaptation by David Hare of Katherine Boo’s award-winning book, starring Meera Syal and Shane Zaza amongst others. The Annawadi slum is situated right alongside the city’s international airport and operates as a kind of chaotic underworld where young scavengers survive by stealing, picking through and sorting the detritus from the airport and hotels nearby. Centred on a violent dispute within the slum, David Hare’s play reveals an extraordinary story, mixed with hope and despair, in particular of the resilience of the Muslim family, the Husains, in the face of disaster. The play gets away from sentimentalising slum life and focuses beautifully on the possibility of goodness in a world of desperate deprivation.

• We are Completely Beside Ourselves by Karen Joy Fowler

“I wanted you to have an extraordinary life,” confesses Rosemary’s mother in Karen Joy Fowler’s endearing and provocative take on family life. Philip Larkin reminds us about what mums and dads do to their kids, but this book does it again in a simply exhilarating, achingly funny and deeply serious way. I simply loved this novel although it broke my heart.

In brief, the Cookes aren’t your average 1970s dysfunctional American family. Rosemary’s father is a workaholic college professor, her mother has had a nervous breakdown, her brother is wanted by the FBI, and her (twin) sister (SPOILER ALERT) is a chimp. Really. She is a female chimpanzee they named Fern who is brought up alongside baby Rosemary as part of a primate experiment. But something happened that meant Fern had to be sent away when she was five and that’s the mystery that pulls the reader into this novel long before we realise that Fern is a chimp. That happens about a third of the way in and just when you think that they’re having a normal sisterly relationship but that something’s a bit off between them. Go on, you need to read it to find out how it all ends up.

James McAvoy plays Jack, a paranoid schizophrenic who believes he is Jesus Christ. Jack inherits the title of 14th Earl of Gurney when his father dies in a bizarre accident when a sex-hanging game goes wrong. Completely out of his depth in the upper reaches of elite society, Jack lands at the centre of a ruthless power struggle as his scheming family try to maintain their reputation.

This massively full-on play by Peter Barnes, written in 1968, was directed by Jamie Lloyd. It’s a revolting social satire that asks a lot from the audience – we were exhausted by the end and some people left half way through! McAvoy flings himself into the role with an almost demonic vigour and is fascinatingly, brilliantly weird.

There’s been lots of discussion about the play’s relevance for today, and Barnes’s point – that it’s still the belief of the privileged upper class and super-rich that they deserve to run the country is no saner than a guy believing that he’s Jesus – remains starkly relevant in this high energy and quite monstrous piece of ’60s satire.

• The Year of Magical Thinking by Joan Didion

Joan Didion is one of America’s great writers and this is her portrait of a marriage and a life – in good times and bad – that will speak to anyone who has ever loved a husband or a wife or a child.

Days before Christmas 2003, John Gregory Dunne and Joan Didion saw their only daughter, Quintana, fall ill. First they thought it was flu, then pneumonia, then complete septic shock, and she was placed on life support. Days later, the night before New Year’s Eve, the pair sat down to dinner after visiting their daughter in hospital and John suffered a massive and fatal coronary. A partnership of 40 years over in a second. Two months later, arriving at LA airport, she collapsed and had 6 hours of brain surgery to relieve a massive haematoma.

It is a powerful book of honesty and passion, Didion’s ‘attempt to make sense of the weeks and then months that cut loose any fixed idea I ever had about death, about illness, about marriage and children and about memory, about the shallowness of sanity, about life itself’. Her writing explores an intensely personal, yet universal experience laid bare.

Paul Weller’s recent downsizing from arenas to smaller under-used venues for his latest run of concerts is brilliant. The packed Portsmouth Guildhall was the third date of the tour and almost 38 years on from the first time Weller was first in the city with The Jam. I’ve been a big fan of The Modfather since I first saw The Jam play at their (almost) last concert at Wembley Arena on 11th December 1982. The tickets were £5 and I still have the stub safely at home. I then saw him play with The Style Council a couple of times when at university in Newcastle in the late 80s, but this is the first time I’ve seen him live since then and I was quite thrilled to see him walk on stage for this energetic and wide-ranging performance. Some of it was unexpectedly experimental but the set proved to be a musical journey of tracks from his first self-titled solo album and also songs from the yet-to-be-released Saturn’s Pattern album. It was really enjoyable to see him changing and continuing to challenge himself; he’s a genius.