A ’52 TV ‘experiment in abstract art’ 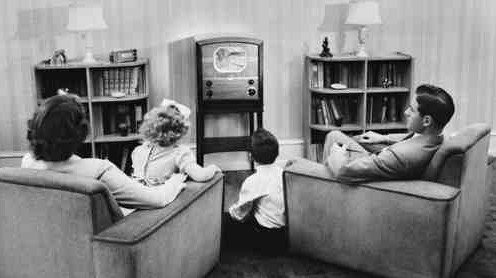 At 10.15pm on Wednesday 10 September 1952, just after an edition of the fortnightly film review show Current Release, BBC Television broadcast a 15-minute programme titled Shapes and Sounds. In its listing pages Radio Times described the transmission as ‘an experiment in light and music’, while the ‘Talk of the Week’ column explained that it was ‘designed to explore the possibilities of light patterns on the television screen’. Shapes and Sounds was produced by Christian Simpson, a fascinating figure from the early days of television, and he worked on the show with a group of artists including Rocky Stone, John Keen, Bruce Lacey, Alexis Key and Ivor Broughton.

Media studies records artists beginning to work with television in the 1960s (in the United States) and ’70s (over here). So this little discovery, which I believe is all-but-unknown to scholars (and of course no recording exists), will help re-write the history books. But perhaps it has another lesson for us as well, as the Sunday Times critic Maurice Wiggin suggested:  ‘The fact that (in my opinion) the experiment [of Shapes and Sounds] did not succeed is not important. What matters is that the television authorities had the nerve to let Mr Simpson “have a go”.’

Christian Simpson was an innovative producer for BBC Television in the late 1940s and through the ’50s. He specialised in dance performances and programmes about music which the Radio Times article mentioned above described as ‘adventurous’. Thanks to a richly detailed 1996 article by Janet Rowson Davis in the journal Dance Chronicle we know something of his background:

After completing technical studies at Heriot-Watt College (now Heroit-Watt University) in Edinburgh, he became a BBC-TV sound engineer in 1936. His wartime service in radar furthered his technical experience. On demobilization and his return to the BBC, he worked in all branches of television production as technician, camera-man, and studio manager, before completing the producers’ course. He was, in addition , an accomplished artist who exhibited at the Royal British Artists’ (RBA) Gallery in Pall Mall, London, as well as a keen amateur pianist and composer.

Eric Robinson, television ballet’s most frequent conductor, wrote of him, ‘By nature and talent an artist, he has added to this virtue a depth of technical knowledge…. He is one of the few men in the business who knows exactly what it is like to be a camera dolly-man, who can clamber into the roof and work the floods, or trace a microphone fault…. You may be mystified or even infuriated by a Christian Simpson production. But you will never be bored.’

On the basis of the following quote alone, from a 1954 article in the journal BBC Review, it seems appropriate to hail Simpson as a visionary:

As we enjoy a visit to an art gallery, television might develop its own form of art exhibition where the receiver screen is the picture frame and, through the means at our disposal, we aim to present a changing sequence which resembles absolutely nothing but beauty.

It’s fair to say that there were not many people thinking about television in this way sixty (yes, sixty) years ago. In the 1954 article Simpson also explained how Shapes and Sounds came about . He related that an American student called John Hoppé came to see him at the BBC.

With him he brought what he called a new idea in mobile lighting. He walked over to the window and produced from his pocket a piece of pliable, polished metal shaped rather like a bow tie. Thrusting this into the sunlight he manipulated the strip with his fingers, reflecting on to the ceiling an ever-changing pattern of light. During the discussion which followed I learned that he had already infused some other young people with his doctrine, and we arranged in the studio an experimental session for this mobile lighting group. Projecting their combined efforts on to a screen, the cumulative result was sometimes highly effective. In addition to this they had ingeniously created sound to match the visual effects by the unorthodox use of tape recorders.

Of Simpson’s collaborators on the eventual programme, the best-known today is Bruce Lacey (b. 1927), whose work was featured in a retrospective at Camden Arts Centre in 2012. What do we know of the others? A 1956 painting by John Keen (b. 1924)  is in the British Council collection, but I have yet to find out anything more about him. With nothing obvious coming up on Google, Rocky Stone, Alexis Key and Ivor Broughton I’m currently consigning to ‘subjects for further research’. If anyone can enlighten me about them, I would be most grateful.

Simpson outlined that in the programme ‘camera movement was utilised in a setting composed of light shafts, pieces of sculpture, and model-size structures, within which a human figure materialised to carry the theme to its conclusion.’ He claimed that many people found the result ‘highly interesting’ but he also recognised that ‘judging by the viewer-reaction report the programme was anything but a popular success.’

The critical response, too, was largely negative, with Maurice Wiggin’s quote above being the closest the show came to an endorsement. Reginald Pound in The Listener was far from impressed. The programme he thundered

seemed to have derived its inspiration from those widening margins of hysteria in which the modern artistic ego finds itself cavorting in retreat from the too-clamant realities of our time. Someone, we will believe, was trying to tell us something in a new language;’ unfortunately we were given no primer by which to attempt to understand it. Here the effect was of public time being used for private experiment – and I say it will not do.

In The Observer, C. A. Lejeune was more critical of Simpson than of his show:

It is fine that artists should have the chance of working out their theories, and that the BBC should endorse their experiment, but it doesn’t seem to me so good that one of TV’s most distinguished producers should devote the bulk of his time to programmes that must appeal to a very small proportion of viewers.

It is my opinion that Mr Simpson has been pampered, in the sense of being encouraged to produce charming effects of which there is no evidence that he knows the meaning. I say so boldly, since I am one of the critics who have consistently pampered him. I should like to see him temporarily dragged away from his world of abstract images and, above all, from the ballet, and given something concrete, gritty and positive to say.

What Mr Simpson did next deserves a blog post of its own, as do other aspects of this little story from more than sixty years ago. Watch out for those over the coming days.