An Age of Kings: one year on 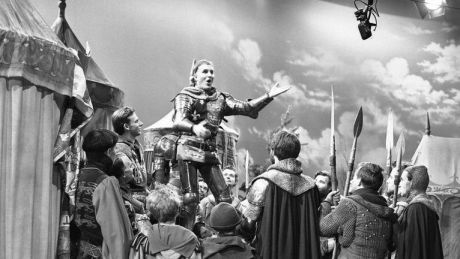 Just exactly one year ago, Illuminations, working with the Screen Plays research project, released a DVD box-set of the BBC’s 15-part series from 1960, An Age of Kings. The series is an extraordinarily ambitious live studio production of all eight of Shakespeare’s History plays, embracing the Bard’s chronicle of England from the troubled reign of Richard II to the downfall of Richard III. You can purchase the 5-disc DVD set here.

The release has been a considerable success – and we would love to follow it with further DVDs of great plays from the BBC archive, although we cannot persuade BBC Worldwide to work out an appropriate relationship for this. To celebrate our modest anniversary, and also to draw your attention to the fine new iteration of our YouTube channel (revamped by Todd Macdonald), we are going to release key scenes from the series on each Tuesday and Thursday between now and Christmas. I will also provide some further background to the series on the blog, together with links to other writings. This is the first, from Henry V and Episode 7, Signs of War, with Robert Hardy as the king.