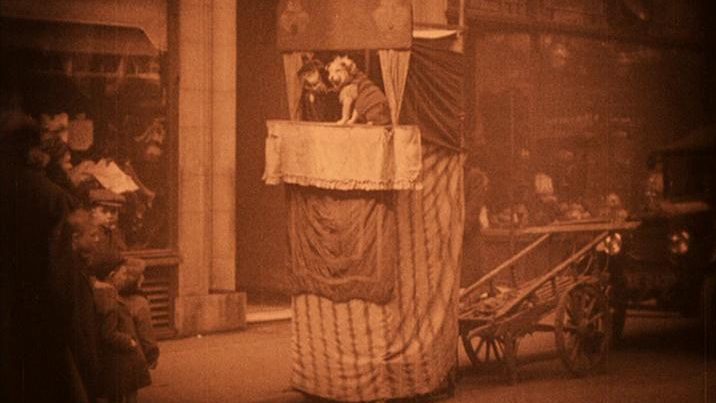 At the end of last week I celebrated BFIPlayer’s new collection The Arts on Film which offers 100+ features and documentaries for online viewing. Many are free to access (including those below) and there is much that is unfamiliar alongside a number of well-known titles. Continuing my exploration of the fringes, below are brief notes on six pre-World War Two films, all of which were unfamiliar to me.

None of the six is in any sense a ‘conventional’ film about the arts, and in each one specific artforms are touched on more or less tangentially. The main concerns — a portrait of a place, for example, or a glimpse of a celebrity — lie elsewhere. Nonetheless, they each belong to a kind of ‘pre-history’ of the arts documentary, and each has considerable interest.

This is an 8-minute, beautifully restored sequence of scenes from the Wonderful London series of travelogues. In between rather a lot of title-cards, there are truly remarkable street shots, including exteriors of several theatres and a street Punch and Judy show (illustrated above). But the ‘free shows’ also jokily include the likes of watching other people dig up roads. For an excellent review of the BFI DVD release of the full series, including background to its production in the 1920s, see the 2012 review by Silent London.

A finely-shot, mute local newsreel (courtesy of the East Anglian Film Archive) showing the parade, speeches and wreath-laying commemorating in his native town of Sudbury the 200th anniversary of Thomas Gainsborough’s birth. Included amongst the dignitaries is the then President of the Royal Acdemy, Sir Frank Dicksee.

This is the gem of this sextet – an extended amateur film portrait of Manchester School of Art (courtesy of North West Film Archive), shot by George Higginson. According to the accompanying text,

George Higginson (1895 – 1966) was a highly skilled amateur filmmaker whose work includes travelogues and award-winning scientific documentaries. Originally trained as a cotton engineer, he served in the army in World War One, before enrolling in his early thirties at Manchester School of Art; he later went on to teach drawing and painting at Bolton School for Boys.

In just over half an hour of mute footage, we see both male and female pupils in drawing sessions, modelling,  learning to lino cut, sketching outdoors, and in life class, where a muscular model is discreetly dressed for the young ladies at their boards. Works on display betray the influences of French painting of earlier decades but there is plenty of respect for tradition on display as well.

• Arthur Conan Doyle Relaxes with his Family at Windlesham, 1930

I would have liked a bit more background to this eclectic assembly courtesy of the Wessex Film and Sound Archive. The 17 minutes of mute footage appears to bring together material from at least two sources – home movie footage of the Sherlock Holmes author at home and on his travels, and then later more ‘official’ shots (with inter-titles) of Conan Doyle, identified as ‘the noted Author and Spiritualist’, applying for Bonds in the Queensland Government loan scheme (!). A subsequent title card, created using a different font, claims that ‘This was the first occasion on which Sir CONAN ever allowed himself to be cinematographed’. Immediately after which the film appears to jump back to East Africa, and then back to Sir CONAN with his family at Windlesham.

Just under 2 minutes of home movie footage (preserved by the South West Film and Television Archive) of picturesque shots of the Cornish fishing village. The first of two inter-titles identifies it as as ‘artist mecca’ but there’s nothing in the film itself to justify this, and otherwise we get some fine shots of the houses, boats, a rough sea breaking on rocks and – just to underline how there’s nothing new in moving images – a couple of cute shots of cats.

A lavish London, Midland & Scottish Railway marketing film made to encourage people to book a train trip to the Lake District. A sonorous narration incorporating fragments of poetry accompanies monochrome picturesque pictures of the hills and lakes as well as buildings associated with the biographies of Wordsworth (who gets most screen time), Coleridge and Southey. Dropped in there too are brief scenes from a silent feature film to depict the French Revolution. There is no writer or director credit on the film, although ‘Narration’ (whether the writing or speaking is unclear) is given to one H. Morton King.