Ballet for breakfast, lunch… and more 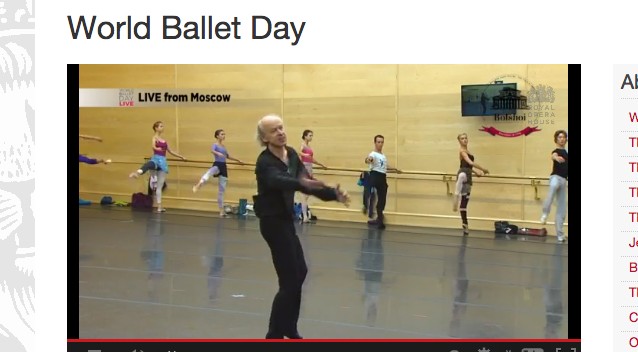 Today is World Ballet Day, a remarkable online collaboration of ballet companies around the world. Since 3am this morning the Royal Ballet’s free Youtube channel has been relaying rehearsal footage, interviews and more from The Australian Ballet and now we’re in Moscow with the Bolshoi (above). The virtual baton is handed to Covent Garden at 11 this morning. I would love to spend all day watching but real life means that I can only drop in and out occasionally, as you’ll see below….

7.20am: We’re in one of the rehearsal rooms of the Bolshoi, and artistic director Sergey Flin is offering a whispered commentary – but in Russian. Although now this is being interpreted and contextualised in voice-over. The images and sound are excellent, and my domestic broadband is only “hanging” very occasionally. There’s immediately an impressive sense of being invited in on a process which is all the more immediate and interesting because it’s not being structured and mediated by the expectations of television.

7.35am: Alongside the video stream there is a lively chat channel with a mix of informed commentary from watchers along with queries and gossip.

7.45am: Some of the dancers are offering brief interview comments between their exercises. The Royal Opera house Youtube page says that around 770 people are watching, although I’m not clear if this is the number viewing through this page (and others are accessing it in other ways) or if this is the total number internationally. At least it will provide a benchmark to see how the figures rise and fall through the day.

8.30am: A rehearsal with just two star dancers now, and some very elegant camerawork which allows us both to see the ballet master and, reflected in a huge mirror behind him, the dancers. Now an interview with principal dancer Svetlana Zhakarova (in Russian again), who we have just watched rehearsing – and she is engagingly out of breath. On then to principal dancer Denis Rodkin.

8.35am: On to a ‘bauprobe’, which I learn is a kind of showing of the full-scale set on the stage. So we get to see what the main house looks like from the stage – and we have (basic) sub-titles here – although at times they obscure vital parts of the image. Bit of an artistic disagreement about whether or not they can have water on the stage. Around 840 watching now.

8.50am: An onstage rehearsal, and the dancers aren’t ready – the choreographer Grigarovich is not happy, and is shouting at the stage. Maybe they prepped this to add a bit of drama, but I don’t think so. It feels very spontaneous – and not quite controlled. The stage rehearsal begins, with orchestra, of A Legend of Love. At times the camera cuts away to the poker-faced choreographer.

8.55am: This is really impressive – remarkable access, a big orchestra, exceptional shots of stage, house, pit. But I *have* to do some other things. Back later, and certainly to catch some of ROH after 11am.

12.35pm Back now with ROH and a rehearsal class. Immaculate sound and pictures – and more than 2,300 watching now. The dancers break and are being interviewed – thoughtful, engaging – I just wish I could spend all day watching.

12.47pm: Oh! Rehearsal run-through of a pas-de-deux from MacMillan’s Manon. Main camera on a small crane so we are above the two (astounding) dancers. Very beautiful.

12.50pm: Somehow it’s made all the more thrilling by being just a reharsal room piano and hearing the comments of the répétiteur watching. Comments too from Director, Royal Ballet Kevin O’Hare. The 2,545 viewers – not to mention me – really are getting a treat. I don’t think anything else I’ve seen – in documentaries or wherever – has got me this close to the rehearsal process of a ballet.

13.08pm Lots of fan love in the chat channel, which is adding its own level of fun. The two dancers, Nela and Federico, are being interviewed now. Federico signs off with a plug for the cinema broadcast of Manon on 16 October. I’m off to book my tickets now.

13.13pm Wayne McGregor now talking about his new collaboration on a piece about Virginia Woolf. “Who was Virginia Woolf?” asks our host. Not sure if the interested audience online really needs that. Followed by terrific montage of extracts from Wayne’s work: Chroma and Infra.

13.21 Composer Jody Talbot in a video package talking us through the composition of the score for Alice. Choreographer Chris Wheeldon in interview too, as well as designer Bob Crowley. Plus dancers Edward Watson and Sarah Lamb. Very nice, elegant film.

13.27 Bit of a sound snafu there as we go into Cassandra rehearsal. Still don’t think we’ve quite got the choreographer on a good mic. But I have to drag myself away and do some other writing. Overall, I am most impressed. Bravo, Royal Ballet!

9.35pm Back for a final session, and the day has moved on to San Francisco Ballet. The local production team has a Steadicam (or equivalent) to film this rehearsal. The standard of camerawork has been really high for everything that I’ve watched. Just over 2,400 viewers at the moment.

9.54pm The rehearsal is for a ballet called Raku, and by seeing the sequence several times you really do get a sense of development and indeed improvement. Interesting interview now with principal dancer Yuan Yuan Tan who has been working with the company for 20 years!