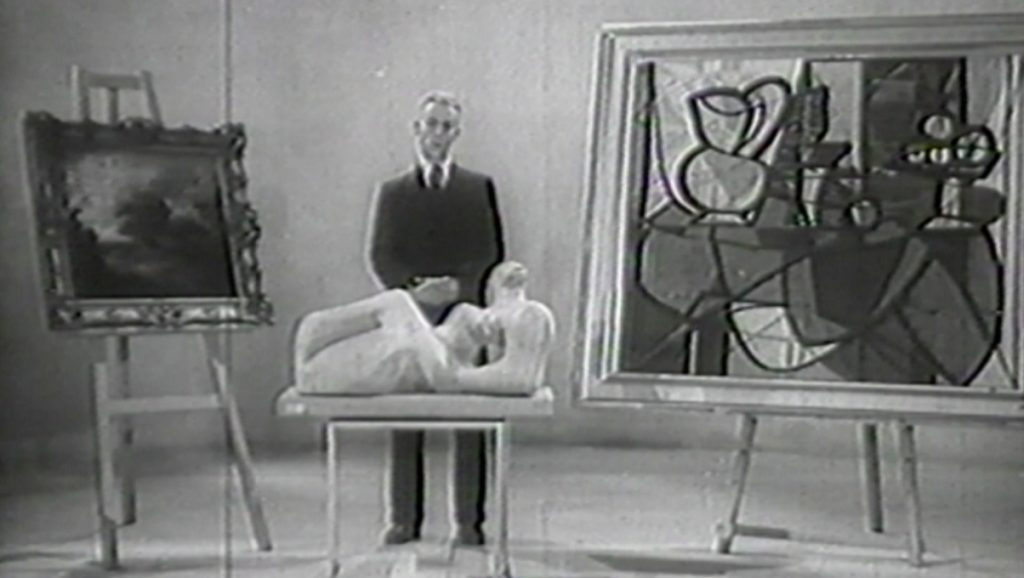 My topic of the arts on television before World War Two is one that I’ve explored a little on this blog in the past, including here. And the richness of the archive material makes me hope that I can find time and resource to research it in much more depth in the future. In the meantime, below is my title and abstract for Tuesday. END_OF_DOCUMENT_TOKEN_TO_BE_REPLACED 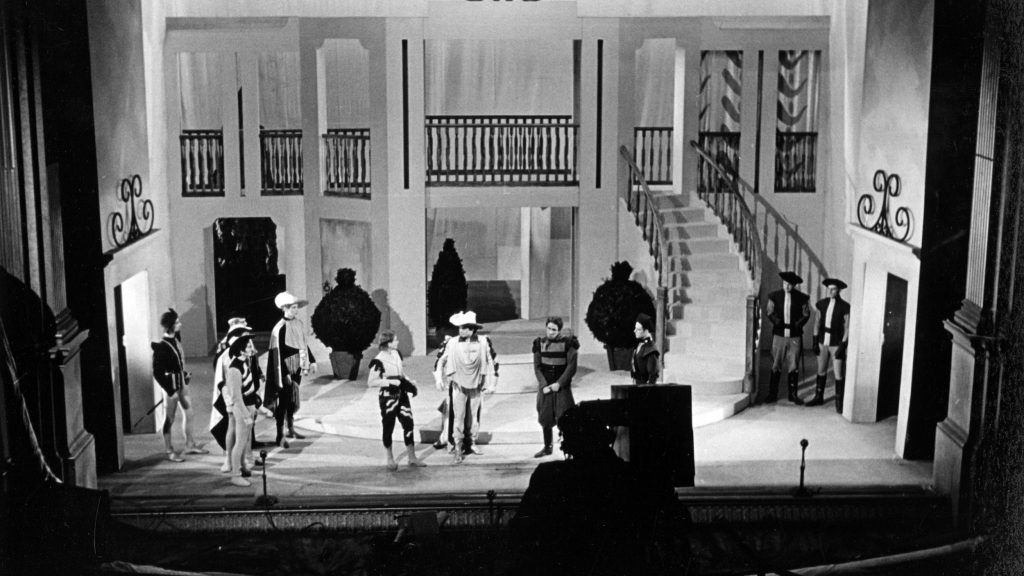 The article is developed from a paper that I gave at a 2014 conference, organised by Kingston University and The Rose Theatre, focussed on David Garrick and Shakespeare, but I broadened it out from that discussion of a 1939 television production of Garrick’s version of The Taming of the Shrew. As a taster of the essay, I reproduce its opening below – for the rest, can I recommend you access the volume through a library or via an online subscription, as the book is priced at an unaffordable level in the way that academic publications now seem fated to be. END_OF_DOCUMENT_TOKEN_TO_BE_REPLACED 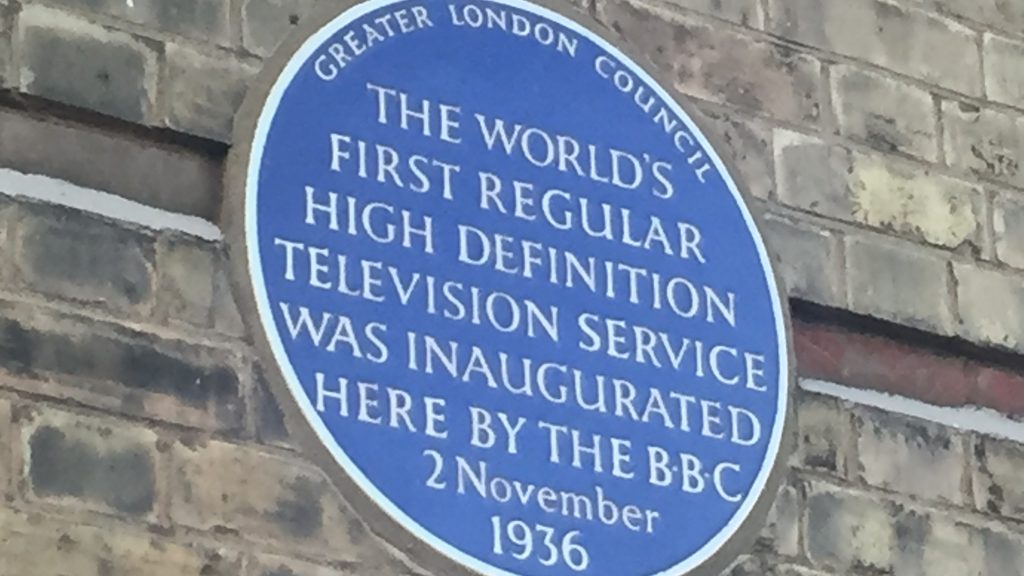 The world’s first regular television service started 80 years ago today, when BBC Television began daily transmissions from Alexandra Palace (above is AP’s blue plaque). To mark the date, at 9pm tonight BBC Four broadcast Television’s Opening Night: How the Box was Born, and I live-blogged the evening. For the advance information on the programme, scroll to 6.15pm, and then read up through the evening as I linked to other resources and, after 9pm, offered reactions to the programme.

The programme itself is now on BBC iPlayer until, I think, 2 December.

Throughout, this remained as irresistible as ever:

END_OF_DOCUMENT_TOKEN_TO_BE_REPLACED 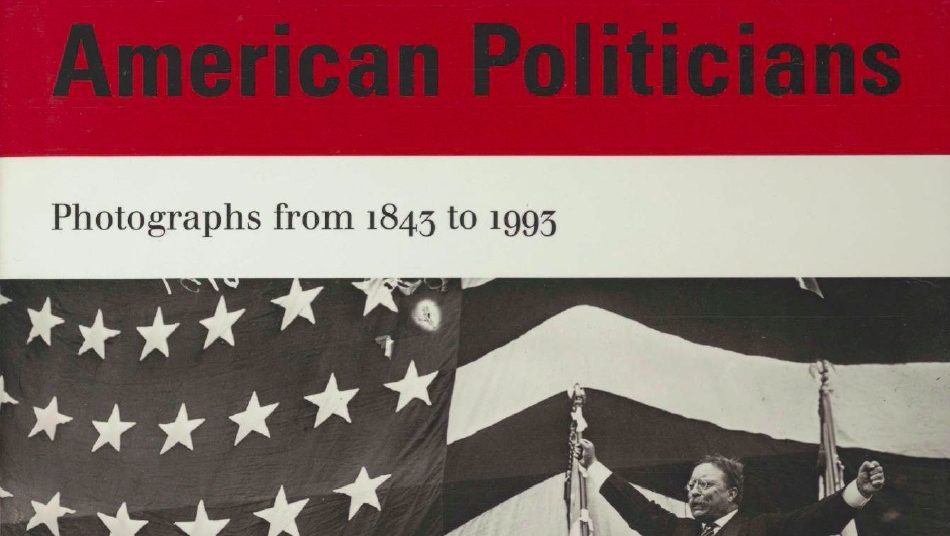 The Museum of Modern Art in New York recently unveiled an exciting, extraordinary and exemplary archival project, ‘Exhibition history’, that is putting online for free and unrestricted access thousands and thousands of installation photographs, press releases and – most remarkable of all – hundreds of out-of-print catalogues. I have picked three initial favourites below, but it’s important to recognise just how astonishing an achievement this is – and how it makes available unparalleled access to the history of one of the world’s great cultural organisations. Perhaps Tate might take a look?

The digital archive project will include almost 33,000 exhibition installation photographs, most never previously available online, along with the pages of 800 out-of-print catalogs and more than 1,000 exhibition checklists, documents related to more than 3,500 exhibitions from 1929 through 1989. (The project, supported by the Leon Levy Foundation, will continue to add documents from more recent years and also plans to add archives from the museum’s film and performance departments.)

END_OF_DOCUMENT_TOKEN_TO_BE_REPLACED 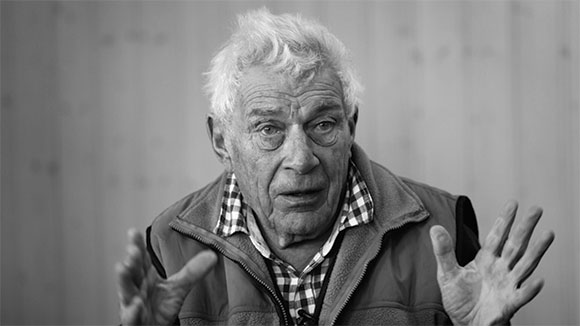 Yesterday’s Observer carried a loving profile by Kate Kellaway of the writer John Berger. Berger’s 90th birthday is this coming Saturday, and Kate Kellaway catches something of the achievement and significance of his life when she writes:

Critic, novelist, poet, dramatist, artist, commentator – and, above all, storyteller – Berger was described by Susan Sontag as peerless in his ability to make “attentiveness to the sensual world” meet “imperatives of conscience”. His book Ways of Seeing, and the 1972 BBC television series based on it, changed the way at least two generations responded to art. And his writing since then – especially about migration – has changed the way many of us see the world.

The following weekend, on Friday 11 and Saturday 12 November, Birkbeck, University of London, is hosting a screening and symposium, ‘Faces of John Berger’, at which I’ll be chairing one of the panels. The screening on Friday evening is of the 2015 film The Seasons in Quincy: Four Portraits of John Berger. Tickets cost £5 for each event, and can be booked here. And to mark all of this, below is a selection of perhaps less well-known material with and about John Berger that can be freely accessed online. END_OF_DOCUMENT_TOKEN_TO_BE_REPLACED 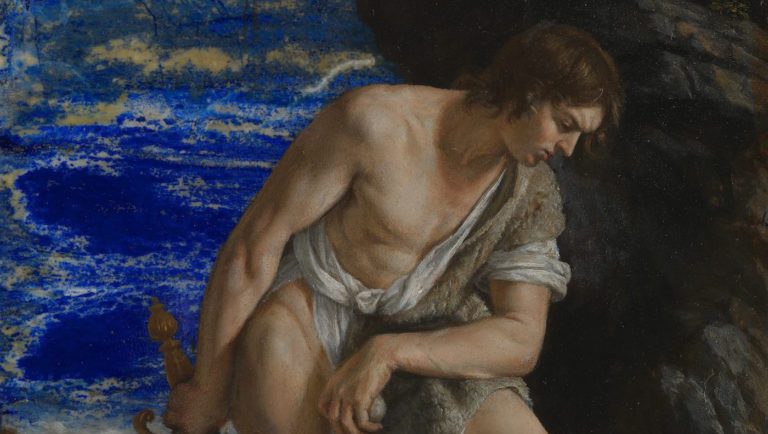 Another fortnight and another missed Sunday links last weekend. Apologies, but I hope today’s list of articles and videos that I’ve found interesting recently goes some way to making amends. As usual, many of these have been highlighted on Twitter and a few have been kindly sent to me as recommendations, but I don’t quite have the energy (nor, I suspect, you the interest) to feature each person by name. We only have today and next Sunday before the US Presidential election, although I doubt that remarkable articles like the first couple I feature here will no longer be published – in fact, probably quite the reverse.

• Final days: some jaw-dropping stuff in Gabriel Sherman’s report for New York from inside the Trump campaign.

• A closer look at debate make-up: terrific analysis by Alice Bolin for Racked of the meanings of make-up at the Presidential debates this year and before.

• Home Office rules: the London Review of Books has published Will Davies’ brilliant analysis of the state of things this side of the Atlantic – I recommended this before and can only do so, with even more urgency, again.

• Brexit – how a single word became the most powerful rhetorical device in a generation: via The Conversation, interesting linguistic analysis of ‘Brexit’ and ‘the deficit’ by Kevin Morrell, Professor of Strategy, Warwick Business School, University of Warwick.

END_OF_DOCUMENT_TOKEN_TO_BE_REPLACED 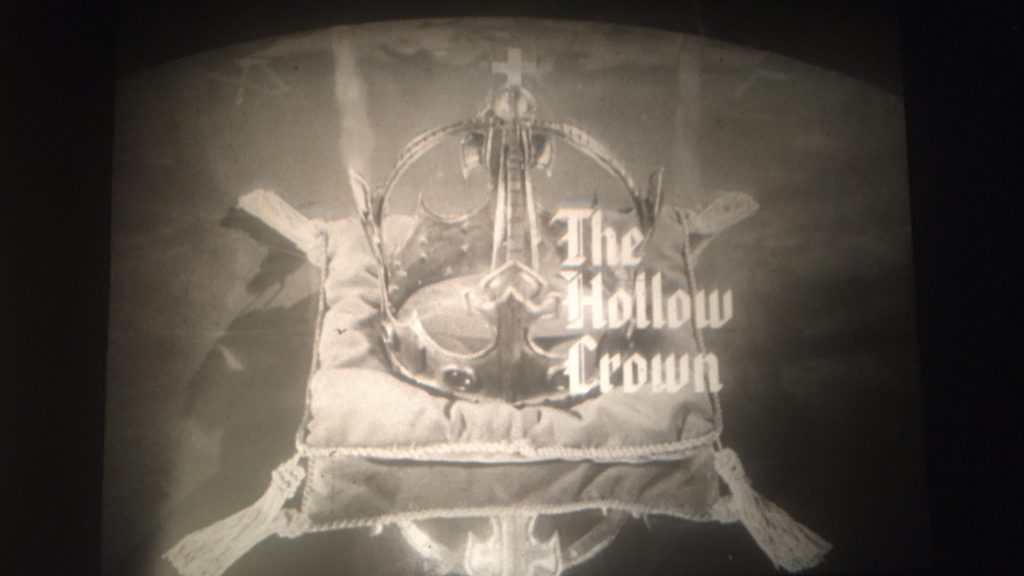 The Hollow Crown is the collective title of the seven films drawn from Shakespeare’s History plays from Richard II to Richard III that played on BBC Two in 2012 and earlier this year. But long before Benedict Cumberbatch gave us his Gloucester there was another version of The Hollow Crown that was first seen on the stage and was then adapted for the screen. And it was a 16mm print of the latter that I viewed on a trusty Steenbeck earlier this week. This Hollow Crown began life as a Royal Shakespeare Company entertainment intended as a one-off performance at the Stratford Poetry Festival in the summer of 1960, although it was still doing service for the company 45 years later. Shot in 1964, the screen version will have a place in the book I’m researching about adaptations of RSC productions. But here’s a preliminary response to a film that stands up remarkably well today. END_OF_DOCUMENT_TOKEN_TO_BE_REPLACED 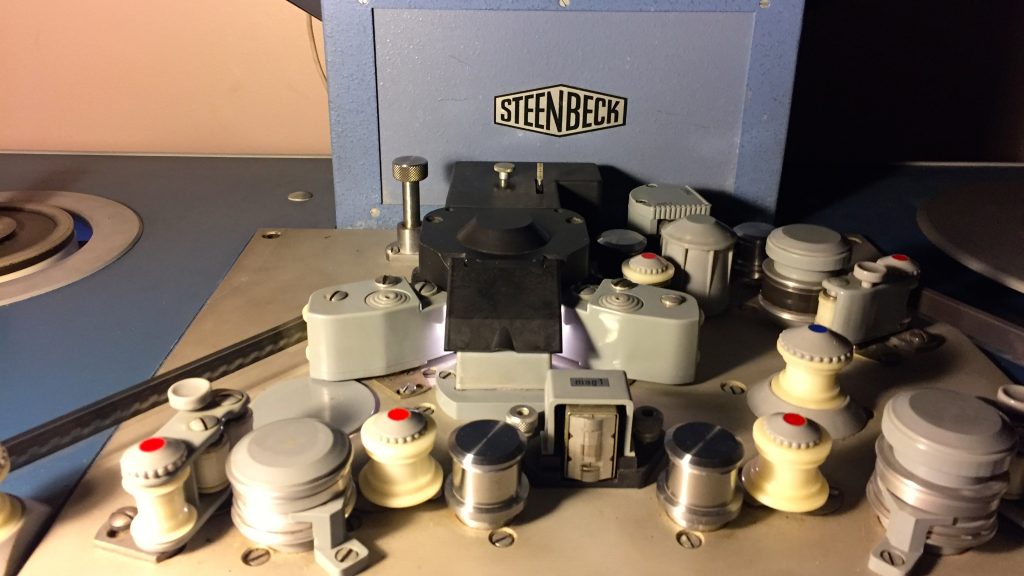 I have had a hugely enjoyable morning viewing a 16mm combined optical print on a 4 plate Steenbeck flat bed. The substance of what I watched must wait for a future post, since here I want simply to celebrate the pleasure provided by the wonderful Steenbeck. A time there was when these editing tables were ubiquitous, and of course I recognise that my jouissance came with a a double shot of nostalgia. Such, however, is the age profile of those making television today, that I wager the majority of people in production now have no sense whatever of what I’m talking about. Certainly most of them will not have had the satisfactions of lacing up a print, locking sprocket holes onto the triangular teeth, hearing the nylon rollers click crisply into place, and easing the speed controller into ‘forward’ so as to prompt the hum of the spinning prism and, finally, to see a sequence of tiny still images spring into life. END_OF_DOCUMENT_TOKEN_TO_BE_REPLACED 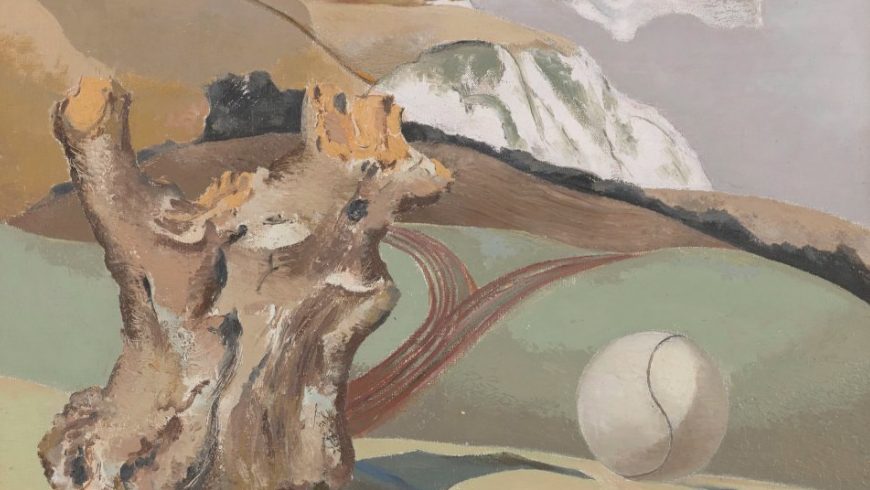 My weekly offering of links to articles and videos that I have found interesting or stimulating over the past seven days. The US election continues to prompt much exceptional written journalism, and I lead with several pieces related to this. Thanks, as always, to those who have pointed me towards some of them, via Twitter and in other ways, and apologies for the absence of appropriate name-checks.

• How the haters and losers lost: McKay Coppins for Buzzfeed on the desire for revenge that drove The Donald.

• Us vs Them – the birth of populism: John B Judis offers essential historical context via the Guardian.

• What the Trump tapes can teach us about TV archives: an important piece, with some great links, by Melanie Kramer for Poynter.

• 7 photos that capture the absurdity of this election season: in a terrific piece of visual analysis for Columbia Journalism Review, Michael Shaw writes on a clutch of key images:

These photos expose the artifice and the political veneer, holding up the process and candidates to an unprecedented level of inspection, critique, and in some cases, a reciprocal dose of hostility. Here are seven photos that, if not for the unusual tone and atmosphere of this campaign, may not have been published.

END_OF_DOCUMENT_TOKEN_TO_BE_REPLACED 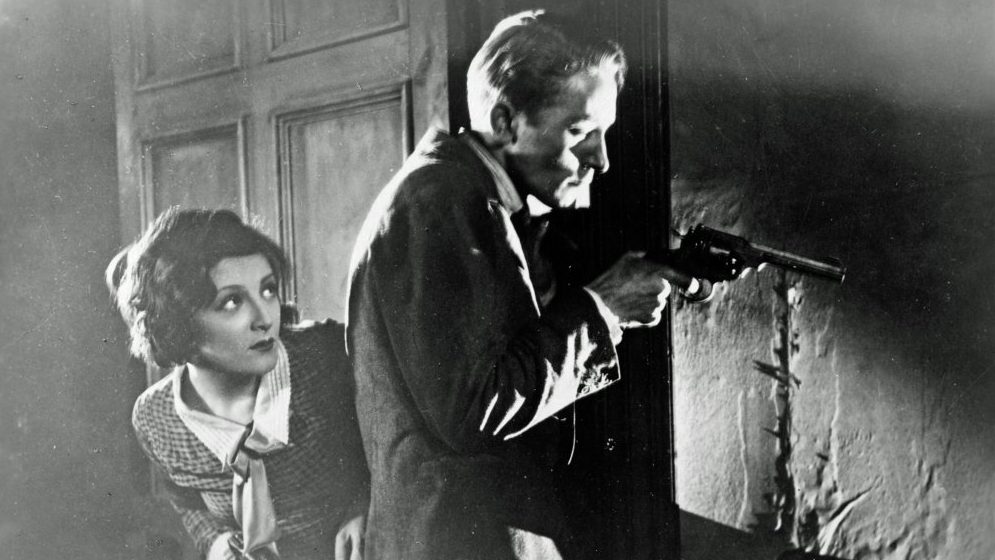 To BFI Southbank for the London Film Festival’s Archive Gala screening of The Informer. Produced in 1929 during the transitional period when the industry was changing from silent film to sound, this intense tale of love, friendship and betrayal was made both with crude dialogue and – with subtly different shots – without. But as BFI curator Bryony Dixon demonstrated with extracts beforehand, the sound recording at the time was crude and the accents of a European cast uncertain. Nor, as this triumphant screening with a newly commissioned score demonstrated, does the film really require speech. A few inter-titles help the story along but The Informer is supremely and gorgeously visual – as well as being a rattling good yarn. END_OF_DOCUMENT_TOKEN_TO_BE_REPLACED