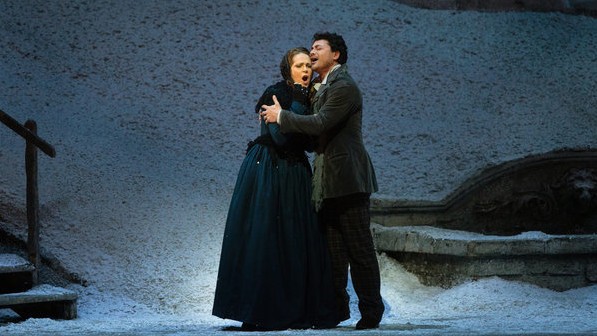 To Clapham Picturehouse for Saturday night’s Metropolitan Opera Live in HD broadcast of Puccini’s La bohème. And “live” it most certainly was, for only around five hours earlier soprano Kristine Opolais replaced flu-stricken Anita Hartig in the main role of Mimi. Host Joyce DiDonato mentioned this in her opening remarks and then the Met’s general manager Peter Gelb went out in front of the curtain to explain the change to the house and, although he made no mention of the cameras, to the rest of the world. What made the occasion all the more remarkable was that Ms Opolais had debuted in the title role of Madame Butterfly just the previous night. The soprano went to sleep at 5am and was woken with Gelb’s request some two and a half hours later, as the New York Times reports. She acquitted herself thrillingly well, making it all rather extraordinary. And for those of us interested in live cinema the broadcast had several other notable aspects.

The broadcast itself was technically fine, although I felt that screen director Barbara Willis Sweete struggled at times to find just the right shot. La Bohème, of course, has four comparatively short acts, but with major scene changes between each one. This lavish Met production by Franco Zeffirelli plays I and II together with a pause between them, and then has two intervals of over a half-hour each. Which left a lot of time for Joyce and the cameras to fill.

What we got at the end of Act II was a glorious, breathless interview with Kristine Opolais and Vittorio Grigolo, who was singing Rodolfo. That they sang their hearts out and then bubbled with irrepressible enthusiasm in front of a backstage camera was entirely endearing. And through the rest of the evening we also met Susanna Phillips, who was singing Musetta, and also ‘the boys: Massimo Cavalletti (Marcello), Oren Gradus (Colline) and Patrick Carfizzi (Schaunard). All of whom came across as thoroughly nice people having a great time. Plus, there were interviews with the Met’s director of production, the man who organises the hundred-plus supernumeraries, two of the ‘supers’ and Peter Gelb.

In his remarks Gelb told us the story of the cast change but mostly focussed on the Live in HD transmissions, stressing how the house made only the most minimal changes to productions to put them on screen. Knowing that a show would be broadcast, he said, had no influence on how a director staged it – which is also a principle that the RSC currently espouses.

What the numerous interviews and links did not offer, however, was any historical information about the opera or about Puccini. I don’t think we even heard the year of the first performance of La bohème (1896), although we did learn that it is the opera that has been played most by the company. Certainly librettists Luigi Illica and Giuseppe Giacosa failed to get a namecheck, as did Henri Murger on whose short story collection Scènes de la vie de bohème the opera was based. There was nothing about Paris at the time Murger was writing, nor Turin where the opera was first staged.

Nor indeed was there any mention of the ‘missing act’ of the libretto, which was only discovered in 1957 – and for which Puccini decided not compose music. The plot of La bohème has always seemed a bit weird and Wikipedia on the opera explains what is missing between the present Acts II and III:

The ‘missing act’… describes an open-air party at Musetta’s dwelling… Musetta gives Mimì a beautiful gown to wear and introduces her to a Viscount. The pair dances a quadrille in the courtyard, which moves Rodolfo to jealousy. This explains his Act III reference to the “moscardino di Viscontino” (young fop of a Viscount).

What we did get were spectacular behind-the-curtain sequences of the scene changes. During the end of Act I pause and then for much of both intervals we watched great teams of technicians move the sets around, constructing and breaking down the garret, the street scene and the snowscape (all of which were originally designed by Zeffirelli) in which the action takes place. A camera in the flies and another on stage simply observed while we listened in to the instructions and (implied) imprecations.

Here was the Met making a grand spectacle of itself – and there was something sublime about it all. Only the grandest of houses can do grand opera on this scale, and the company wanted us to see every aspect of it. Forget about the idea of destroying any magic. Gelb and the Met was convinced that the more we knew about the backstage work, the more we would appreciate the sung scenes on screen. And I think they were right, even if we were denied the delighted surprise when the curtain rose in Act II and then on Act III, on both occasions prompting a round of applause.

There is one last thing to chalk up against these live broadcasts. If your heroine dies on stage, especially if she is clutching a furry muff on her chest, you cannot expect her to hold her breath across some five or six minutes. Yet the implacable eye of the camera catches it all. Kristine Opolais might have felt, after all she had gone through, that she might like to die by that point, but it was all too clear that her corpse was breathing hard. Brava, nonetheless, brava!