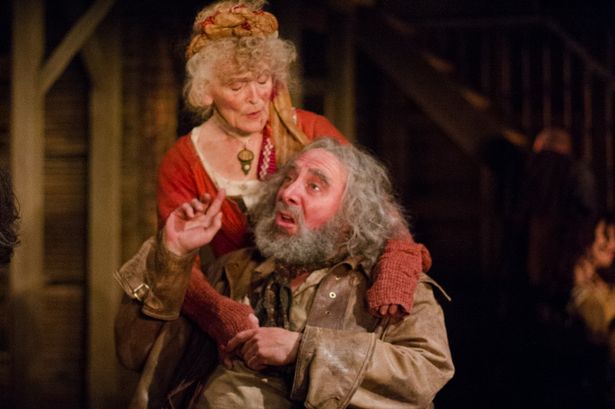 I am in Stratford-upon-Avon for today’s first camera rehearsal for the RSC’s live cinema presentation of Henry IV Part II on 18 June. One of the things that frustrates me about these broadcasts is that they rarely get reviewed or discussed as examples of live cinema. Part I on 14 May, however, attracted at least three substantial responses – from the Birmingham Post, from the blog But madnorthnorthwest and from academic Dr Peter Kirwan at The Bardathon:

[I]n this skilful filming of the play not a word was missed, articulation was nigh perfect, the ends of lines were not dropped and so we heard our Shakespeare clearly which is surely the point of the exercise. The other great thing which a seat in the stalls cannot give us, is the intimate close-up. In the film of the play such as this, you can see the pores on an actor’s skin, almost feel his emotional suffering as the camera closes in on his eyes, and you can see the work of the costume department in detail.

After the successful broadcast of Richard II last year, the RSC is now continuing with Henry IV (part 2 follows in June). Started off with a charming and informative interview of Gregory Doran (NTL, you might want to take notes of how these are done. Kudos to Suzy Klein.) who admitted having unsucessfully looked for his Falstaff until Ian McKellen called his attention to the fact he was actually living with him.

• Peter Kirwan at The Bardathon:

This was the first of the ‘Live From Stratford-upon-Avon’ events that I’ve attended, the live screenings from Stratford modelled on the NT Live series that will, hopefully, by 2020 see the complete works of Shakespeare broadcast internationally from the RSC’s main stage. If the RSC wishes to remain competitive in a new market then it’s a necessary step, and it was a pleasure to see John Wyver’s team doing an extraordinary job with the filming. Despite the obvious awkwardness of filming a production performed on a thrust stage, cameras captured the fine detail that characterises Doran’s work, from the apparently suspended crown which dominated the stage at the production’s opening to the detail of Falstaff’s reaction to his dismissal by Hal.

I would be delighted to learn of any other detailed reviews, whether positive or negative.

PS. for the rationale for my new approach to the blog, go here.