Clues, or readings for True Detective 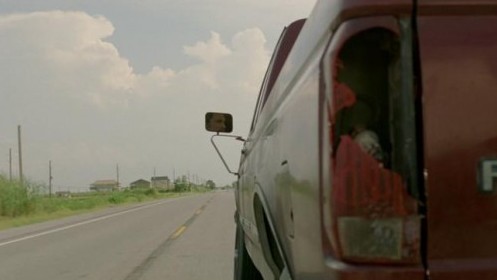 The remarkable True Detective started on Sky Atlantic last Saturday, while in the States HBO has already aired the first six episodes of the opening series of eight. As a consequence, there has been plenty of time for the series to prompt a slew of critical writing – and it’s a selection of this that I highlight here. Anything that can stimulate this kind thoughtful engagement from such a variety of perspectives – including Jason Jacobs’ remarkable philosophical musings – has to be special. New viewers and readers might do well to begin with a trailer, of which this is the fourth that HBO released:

• The murder mystery is beside the point: This early and enthusiastic review for Vulture by the reliable Matt Zoller Seitz is a good place to start:

HBO’s True Detective is truly unsettling, not because it’s about the search for a Louisiana serial killer, but because soon enough the search seems almost incidental: a pretext for testing limits and acting out and debating what makes people tick.

• Murder is just the start: a background feature by Lorne Manly for The New York Times which sets the show in the context of other recent noir series.

• True Detective Cary Fukunaga explains the show’s dark humour: Neil Drumming for Salon speaks with the director of all of the eight episodes in the first series; Fukunaga is known for his work on the features Sin Nombre (2008) and Jane Eyre (2011).

• Director Cary Fukunaga on conjuring the Louisiana noir of True Detective: another interview with the director by Hugh Hart for Fast Company; the shoot on 35mm film took 100 days (which is only around 12 per episode).

This is a fast-paced HBO background feature on the making of the series:

• The McConaissance – an alternate reading: … Anne Helen Petersen here, who ranges back across the actor’s contradictory career.

• The most shocking thing about HBO’s True Detective: Michael Calla for the Wall Street Journal’s blog Speakeasy kicks off the by-now extensive discussion of the literary intertextuality of the series, including references to and echoes of writings by Thomas Ligotti and H. P. Lovecraft, and especially the 1895 collection of stories The King in Yellow by Robert Chambers.

• True Detective – the best show on TV: more enthusiasm for the show from Christopher Orr for The Atlantic…

• Cool story, bro: …but Emily Nussbaum in the new issue of The New Yorker isn’t buying it -= and she makes some important points in comparing the series with Top of the Lake and The Fall:

To state the obvious: while the male detectives of True Detective are avenging women and children, and bro-bonding over ‘crazy pussy,’ every live woman they meet is paper-thin. Wives and sluts and daughters—none with any interior life.

• Who or what is The King in Yellow? Ask the True Detectives: David Barnett for the Guardian traces the connections.

• The one literary reference you must know to watch True Detective: more on the show’s echoes from Michael M. Hughes for io9.

• The crazy mythology that explains True Detective: … and more, here from Alyssa Rosenberg for ThinkProgress.

• A True Detective reading list: … and a round-up of those references from Buzzfeed.

• Art of the title: a great feature deconstructing the series’ remarkable title sequence.

• How HBO’s True Detective will change the way you watch television: Allen St John for Forbes reflects on the series in the context of changes within television.

• Did the Jeff Davis 8 inspire True Detective? Now here is where things start to get really weird – one of many reports linking the plot of the series to a group of unsolved murders in a place in Louisiana called Jefferson Davis Parish.

• Who killed the Jeff Davis 8?: Most of the reports are linked to this exhaustive and compelling essay by Ethan Brown for Medium – this is a terrific read.

• What True Detective means: Jason Jacobs’ blog post at his Screen Aesthetics site is also a great read, although in a very different key – it’s a rich, nuanced, philosophical reflection on the series:

At the heart of the show are a number of mysteries that continually foreground two central issues familiar in us in a number of recent US quality dramas: the problem (or puzzle) of other minds, and the nature of time, especially its handling of past, present and future (perhaps we can call it the problem of history in fictional worlds). Both seem to me connected to, in ways that remain unclear, to some standing questions of modernism and modernity, not least the problem of whether it is possible to articulate the nature of meaning within the limits or range of a particular medium.

… and finally, for some kind of light relief, this is the striking America (Go Forth) commercial for Levi’s that director Cary Fukunaga made a couple of years back: