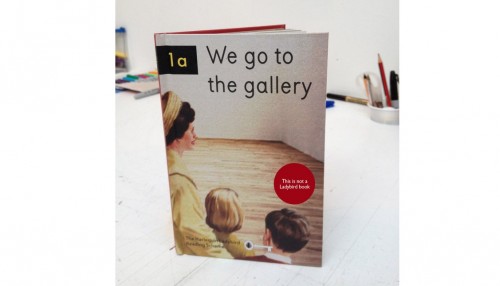 Until yesterday’s Guardian article by Gareth Rubin I regret to say that I had not heard of the artist Miriam Elia and her totally delightful website Learning with Miriam. I had, however, seen several of her smart art parodies of Ladybird Books popping up in my Twitter feed. My favourite was the one in which the cover illustration above is accompanied by a facing page of text that reads

‘There is nothing in the room because God is dead,’ says Mummy.
‘Oh dear,’ says Peter.

Miriam produced 1,000 copies of her We go to the gallery book and was selling them for £20 each when the m’learned friends from Penguin Books descended and told her she was infringing their copyright. Now she is allowed only to sell enough copies to cover her initial costs and must then cease and desist from making us laugh and making us think and making the world just a little better with her art. What is even weirder, what she is doing may not infringe copyright in a month’s time – and it almost certainly would not be an infringement in the United States, Canada, France and elsewhere.

New copyright legislation is planned to come into effect on 6 April this year. According to the ‘Seventh Statement of new Regulation’ from Department for Business Innovation & Skills issued in December 2013, a package of reforms to copyright law is being introduced which will give users of copyright a number of new basic rights. This follows the 2011 Hargreaves Review of Copyright which recommended changes to the all-important Copyright, Designs and Patents Act 1988.

Amendment BIS 1057 to the Act introduces an exception into copyright law ‘allowing limited use of copyright works for the purposes of parody, caricature and pastiche,’ which surely would permit Miriam Elia to continue selling her rather brilliant parody. So if I can can use this post to offer just a little advice to one of our great cultural institutions,

Lighten up and back off, Penguin Books.

The change to the legislation was informed by a rather fascinating independent report issued by the Intellectual Property office in January last year. Fascinating, that is, if like me you are engaged by the intricacies of copyright law – and in this digital age of image manipulation and mash-ups, we should all be at least a little interested in this topic. The treatment of parodies under copyright law in seven jurisdictions, written by Dinusha Mendis and Martin Kretschmer, is a detailed discussion of parody and the law around the world, and it includes a handy comparative table outlining the situation in the UK and six other jurisdictions.

While I recognise that a post like this can only offer a very simple outline of complex matters, it seems fairly clear that in Canada a provision in that country’s copyright law permits ‘fair dealing for the purpose of research, private study, education, parody or satire‘. In France ‘humouristic’ parody is permitted, even in a commercial context, as long as there is no intention to harm the legitimate author either commercially or morally.

Australian law appears to be closer to the present UK situation although a ‘fair dealing’ exception in recent legislation has yet to be tested in the courts. In Germany apparently the courts have increasingly interpreted ‘free use’ in the light of constitutional guarantees of freedom of expression and freedom of art, science, research and education.

In the United States the situation is much clearer; as the report details, ‘the right to parody is recognised under the doctrine of “fair use” under section 107 Copyright Act 1976. Finally, in the Netherlands, the test of permitted parody now is that ‘it should normally be sanctioned under rules of social custom’. Whatever that means. Although a 2011 court case found for a parodist who used the children’s character Miffy in contexts of sex, drugs and terrorism.

All of which only reinforces my sense that Penguin Books is being far too heavy-handed… and that Miriam Elia should perhaps accede to their demands now and then bring out a new edition in early April.