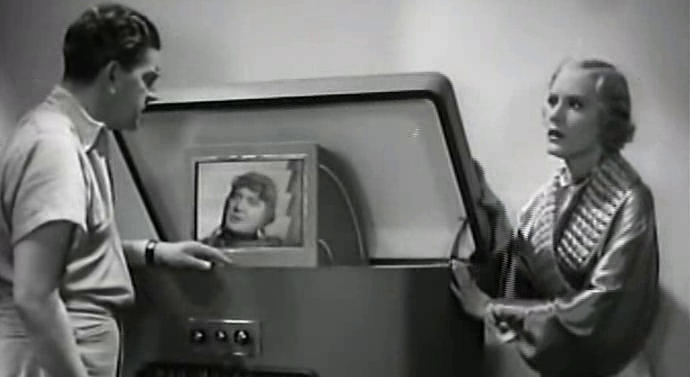 Each of the six contributions to the issue is predominantly concerned with the history of television in the USA – and it’s fair to say that in general the literature on the subject is more extensive in the States than it is here. But there’s lots for anyone interested in the topic to consider, even if the undoubted highlight is ‘Television in the Cinema Before 1939: An International Annotated Database, with an Introduction by Richard Koszarski’.

What Koszarski has compiled is a detailed list, often with photographs and links to reviews and occasionally even online videos, of as many as he and colleagues can identify of the pre-World War Two theatrical narrative films in which television in some way takes a role. Newsreels and straight educational films are excluded but some ambitious industrial films make the cut. Koszarski explains further:

There once was an argument, since debunked, that the motion picture industry ignored the coming of television in the hope that it would somehow go away. In reality, during the interwar era at least, television was first regarded as a technical curiosity worth watching (what Variety in 1923 called a “radio eye”) and then as a new means of promotion and distribution for the film industry’s own products, an avenue that might be controlled not by David Sarnoff, but by the integrated Hollywood majors themselves.

Far from ignoring the new medium, the film industry always kept a wary eye on it, and the depth of its concern could usually be judged by the style and content of the dozens of films it produced in which television—a consumer technology that did not then exist—was presented as a force to be reckoned with in the lives of average citizens.

The database bears out his argument, although the films come from a far wider range of sources than just the Hollywood Studios. There are films here that I knew, including the remarkable British feature Radio Parade of 1935, with Will Hay (unmentioned by Koszarski) as a John Reith-like BBC Director General, but dozens of which I knew nothing – like The Tunnel (from which the still above comes), directed by Maurice Elvey in 1935. There is a remarkably rich field here for further research, and I intend to return to some of the highlighted films in future posts.