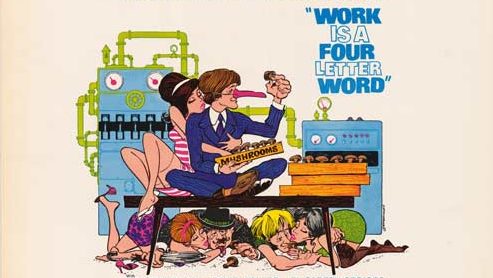 Have I mentioned that I’m writing a book about screen adaptations of Royal Shakespeare Company productions? It’s due out from Arden in 2018 and I have to deliver the manuscript at the end of next year. So as my editor will be pleased to hear I’m busy researching away. One of the first things to establish – and that I foolishly thought I had pinned down in the proposal at the start of this year – is a definitive list of which films and television programmes have been made from RSC stagings. But this is proving trickier to compile than I expected. There are inevitable problems about deciding quite what is or is not an adaptation. What I hadn’t foreseen, however, is that screen versions previously unknown to me keep coming to light. Of which the latest is the 1968 Peter Hall-directed feature film Work is a Four Letter Word that began life on the RSC stage in 1964 as Henry Livings’ play Eh?

Is anyone prepared to own to having seen Work is…? If so, I’d love to learn your thoughts via the Comments box below. For despite starring Cilla Black (in her only significant screen role) and David Warner, Work is… appears to be a hard film to view. It is not released on DVD or as a download in this country, and so I have ordered a copy from the specialist US distributor, The Video Beat.

I was alerted to its existence, and indeed to it as a RSC adaptation, by Colin Chambers’ fascinating book Inside the Royal Shakespeare Company: Creativity and the Institution, published by Routledge in 2004. Chambers was literary manager at the RSC during the 1980s and ’90s, and his book combines an insider’s sense of history with an often unsparing analysis of the company’s successes and failings. I can see that along with Sally Beauman’s immensely readable The Royal Shakespeare Company: A History of Ten Decades, published by Oxford University Press in 1982, it is going to be an essential source.

Chambers characterises as ‘self-deluding’ the 1966 comment by RSC founder and then artistic director Peter Hall that ‘the future of our company is bound up with films.’ That same year, as US studios were hunting out UK sources of youth-oriented products from ‘swinging London’, the RSC inked a deal with CBS to deliver a clutch of features, including three Hall stagings. Macbeth was signed ahead of going into the theatre, but was poorly received in Stratford and never filmed. A Midsummer Night’s Dream did go before the cameras but is little-seen, even if it does feature Judi Dench costumed in only a very few strategically placed leaves. And the third film was developed from Henry Livings’ Eh?

Eh? had premiered as a RSC production at the Aldwych Theatre in October 1964 with company stalwarts David Warner, Donald Sinden and Janet Suzman in the cast. Two years later there was a New York production directed by Alan Arkin (who came in at very short notice after the first director departed) with a young Dustin Hoffman as the lead. Exteriors for the film version were shot in Birmingham in the autumn on 1967, and the city’s library has put online a small number of images. Colin Chambers criticises Peter Hall for rejecting Henry Living’s own version of the script and for using one by then RSC literary manager Jeremy Brooks, and for Chambers it was this, combined with inexperience and over-work on Hall’s part, that led to the film being a flop.

Here’s the current Wikipedia synopsis of the oh-so-sixties plot:

Everyone is employed by the ultra-modern DICE Corporation but Valentine Brose (Warner) would rather stay at home to tend his psychedelic mushrooms. However, his bedroom is too small and his fiancee Betty Dorrick (Black) wants him to settle down. Accordingly, Brose seeks a job in DICE’s boiler-room, a suitable environment to grow his mushrooms.

The plot describes his attempts to get the job, and the conflicts with middle-management, including the personnel manager, Mrs Murray ([Elizabeth] Spriggs, in her first film role). Having obtained it, Brose is more interested in his mushrooms than tending the boiler, with unforeseen results including a major power cut. The boiler room contains a computer (for some reason), which towards the end of the film is also breaking down.

Brose eventually marries Betty, but is more interested in having her sweep up the boiler room so he can concentrate on his first love, the mushrooms. Eventually he goes haywire and the film ends with Brose and Betty loading up a pram with mushrooms and escaping. 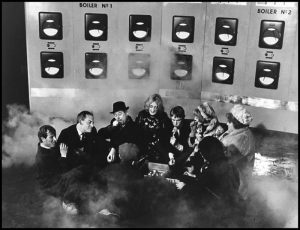 One of the very few written responses to the film that I can find was penned in 2004 by Stephen Puchalski for the online site Shock Cinema, from where I also snaffled the still above. Despite his sense that ‘Hall’s comic pacing is abysmal’, Puchalski is pleasingly enthusiastic about aspects of the film:

All of which suggests that while this may be one primarily for RSC completists, there is enough going on to make it an intriguing watch. I’ll be back to report on just that. In the meantime, here’s Cilla singing the title track, which was released as the B side of ‘Where is Tomorrow?’ Unaccountably, and apparently at Morrisey’s insistence, The Smiths later released a cover of the track.