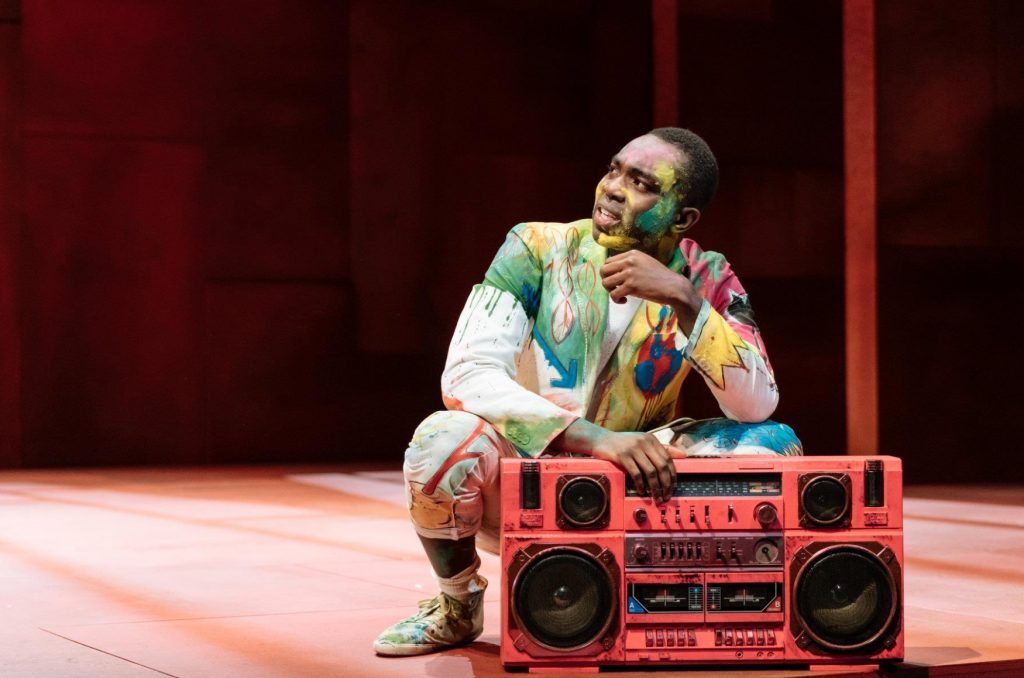 Part of my pleasure at seeing the review of Hamlet this morning was, of course, because it was so positive. Dickson notes that he saw the stage production when it toured to London’s Hackney Empire in 2018:

Then, I was entranced by Essiedu’s electrifying onstage presence and supercomputer speed; encountering him again on a laptop plugged into my TV, it’s a relief to find that none of that is blunted or blurred.

The piece was prompted, of course, by the critic looking for ‘theatre’ in the time of Covid-19 and in this case finding it courtesy of Marquee TV’s stream of the RSC Live from… recording. (A subscription to Marquee TV normally costs £8.99 per month but the service is currently offering a 30-day free trial; alongside 17 RSC productions there are shows from the Royal Opera House, Shakespeare’s Globe and others.) Dickson’s enthusiasm continues:

This is Essiedu’s show: loping around like a wildcat testing the bars of his cage, he flits between sardonic laughter and frantic grief. He may not have the dolour of some other Hamlets, but as he negotiates Shakespeare’s verse he resembles a young jazz musician exploring the outer reaches of his instrument… Stockpile popcorn alongside pasta: this is Hamlet as thriller.

Lovely (and spot-on too). But I was also thrilled to see the article because it is an all-too-rare engagement by a respected theatre critic with a screen version of a stage show. Despite at least a decade of ‘event cinema’ screenings, not to mention television broadcasts, from NT Live, the RSC, Shakespeare’s Globe and many others, theatre critics have almost never written about these adaptations. As far as they are concerned, they respond to shows when they premiere on stage. And anyway (this is implicit and only infrequently expressed) putting them on screen is simply a matter of pointing a camera. The multitude of mediating processes (framing, shot lengths, camera moves and many, many more) that a live or as-live adaptation entails are, for writers on theatre, irrelevant.

Indeed, it’s symptomatic that Andy Dickson considers only theatrical setting and performance in relation to Hamlet, and fails to acknowledge the complexity and subtlety with which screen director Robin Lough and an exceptional team of collaborators translated the show to the screen. The fact that nothing of Paapa Essiedu’s ‘electrifying onstage presence… is blunted nor blurred’ is, to a significant degree, thanks to their skill and commitment.

Nor, even as ‘event cinema’ has become a key element in contemporary screen culture, has discussion of stage to screen adaptations been taken up by film (or television) critics. For them, the broadcasts are “just” theatre (or opera, or dance), and it’s seemingly irrelevant that the production of a NT Live or RSC Live from… presentation is as demanding and as expensive and, I would suggest, as creative as the production of a low-budget independent feature. (I might also mention the deep-seated ‘anti-theatrical prejudice’ – the phrase is Jonas Barish’s from the title of his mammoth 1982 study – of both the film and television worlds, but that is another story.)

As a consequence of these positions adopted by theatre, film and television critics, the stage on screen has hardly ever been considered as a creative practice in mainstream publications. One of the rare exceptions is a significant column written in 2014 for the Guardian by Michael Billington about Digital Theatre’s screen adaptation of Ibsen’s Ghosts from the Almeida:

We are now in an era when the gap between film and theatre, thanks to sophisticated technology, is constantly narrowing… I can only say that [the screen version of Ghosts] offered an experience comparable to that I had in the theatre… while I remain an evangelist for live theatre, I think it’s time we stopped pretending that it offers an unreproducible event. A theatre performance can now be disseminated worldwide with astonishing fidelity.

Billington frames his positive comments in relation to ‘reproducing’ the stage production. Even he is largely unconcerned with the translation process, although he notes that ‘Ghosts is especially well suited to the close up technique adopted here‘ (the link is to a video extract from the production).

Academia, in contrast to the world of journalism, has over the past decade plunged into a plethora of questions about stage to screen adaptations. Some of the very best writing to appear to date (and there are also a slew of PhDs underway) is contained in Shakespeare and the ‘Live’ Theatre Broadcast Experience, edited by Pascale Aebischer, Susanne Greenhalgh, Laurie Osborne (and now available as a paperback and cheap-ish eBook). My own book Screening the Royal Shakespeare Company: A Critical History also touches on some of the key issues.

Today, in this era of enforced isolation, with theatres and cinemas shuttered worldwide, it would appear that the stage on screen is coming to be increasingly valued. The BBC’s Culture in Quarantine initiative has theatre shows, including a half dozen from the RSC, at its heart. Numerous companies have begun to stream their archived productions — and Chris Wiegand’s invaluable list for the Guardian features many of the best available now — and Andy Dickson is not alone among his peers in starting to bring critical faculties to considering screen versions. As I write this Chris Wiegand has just posted a detailed discussion of I, Cinna (the Poet), the RSC’s 2012 adaptation for online of Tim Crouch’s monologue for young adults (and the rest of us) featuring a character from Shakespeare’s Julius Caesar:

There are two Cinnas in Julius Caesar – our poet host [played, wonderfully, by Jude Owusu] is fatally mistaken for a conspirator with the same name. We share his final moments while he is holed up at home and the roar of the crowd swells outside as Caesar is assassinated. Glitchy CCTV footage of riots punctuates the scenes. The city outside is holding its breath amid terror and confusion, says Cinna, sheltering in his bolthole with blasted brick walls. I look through our lounge window at the street outside, emptied of people; sometimes watching a performance in your own home can strike a chord it wouldn’t in a theatre.

Numerous theatre companies are also beginning to explore how to make original drama online using the technologies de nos jours such as Zoom and Twitch. I’m going to return to some of these in future posts, but one of the most ambitious projects is Unprecedented, just announced by Headlong in association with Century Films:

[Eight] intimate new plays will give an immediate insight into this unprecedented communal experience, meditating on how community, education, work, relationships, family, culture, climate and capitalism are changing on an hourly basis. They will be created using digital conferencing technology and will combine live and pre-recorded material.

So in just a few days we have a new embrace by the BBC and the world beyond of stage to screen adaptations, critical attention from journalists who largely failed to notice this form before, and vigorous interest in making new ‘plays’ for streams and screens. Yet the world of the stage still (or at least until a fortnight ago) clings to the idea that ‘theatre’ is what takes place when performers and an audience experience something together at the same time and in the same place.

Theatre was and is about, above all, coterminous co-presence. That is the very essence of theatre. Recordings and screen versions are all very well, this argument runs (and I have heard this said explicitly as well as implied a thousand times), but they’re not ‘theatre’. Actors and spectators need to see and to hear and to feel (in non-physical ways) each other for theatre to work its magic.

Yet might it be, with all of this activity on and around screens, that one of the unexpected fall-outs from the constantly mutating Covid-19 is a kind of mutation in what we believe theatre is and could be? If we all come to accept that there are times, and perhaps many of them, when coterminous copresence is not possible, then might we be more sympathetic to the idea that ‘theatre’ can indeed live just as effectively and as powerfully and as meaningfully on a screen as on a stage?