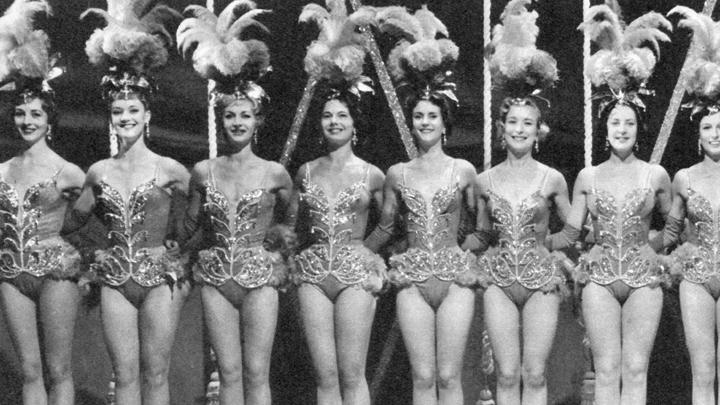 To BFI Southbank for the first screening in a short season marking the 60th anniversary of the ITV network that went on air on 22 September 1955. To celebrate the network’s 21st birthday, back in 1976, Thames Television put together a two-hour special edition of This is Your Life, and last night’s showing revealed it as a delightful and delirious, cringe-worthy and compelling (self-)image of what commercial television was like at its height. Here were shiny suits and bad haircuts in profusion, an awful lot of middle-aged men in charge together with numerous women objectified as game-show assistants and chorus girls (above, from Sunday Night at the London Palladium), the remnants of a long-established music hall tradition, and not a single non-white face. But here too were reminders of of t ITV brought to television in the late 1950s and ’60s: a robust approach to visual journalism in News at Ten, the vigour of a populist current affairs tradition in World in Action, and dramas in Armchair Theatre that showed the British how they looked like and spoke, and what they cared about, around 1960.

The format of the show was an uneasy mix of artistes doing a turn, including an accomplished contribution from Frankie Howerd, and short chat-show segments with host Eamonn Andrews speaking with stars and execs, including Armchair Theatre producer Sydney Newman and the first World in Action editor Tim Hewat. Much of the pleasure came, of course, from the plentiful extracts, including some nostalgia-prompting commercials for the likes of Daz and Oxo as well as a remarkable extract from a Liverpool-Arsenal game when commentator Jimmy Hill came on to replace an injured linesman.

Particularly notable, as so often with archival television, was the sense of what I can only call the texture of 1976 – gestures and body-language, the spoken language dripping with assumptions and associations, the details of clothing and make-up, all of the elements that are caught in visuals and audio fragments from that moment and that could never quite be recreated. And then there’s the sense of exactly what television looked like then: overlit and over-saturated colour images with a sharpness to set your eyeballs on edge, but at the same time the lines and the break-ups of an occasionally unstable image. Should you want to immerse yourself, truly and deeply, in the Britain of the mid-1970s, this is most definitely one place to start.

But let me also note one sublime fragment at the heart of this extravaganza. Writer-producer Andy Allan had his share of some truly terrible ideas. These included a bizarre appearance of a majorette band that marched through the audience and around the re-united team of the ITV sitcom The Army Game (1957-61), several of the cast members of which had clearly spent a fair while in hospitality before coming on stage. But Allan’s masterstroke was booking some fifty or more members of the the Royal Opera House chorus to perform a composition created from the ad jingles of maestro Johnny Johnston. Sublime it was to hear those rich, classically trained voices giving their all to ‘This is luxury you can afford from Cyril Lord’ and ‘You’re going well, you’re going Shell’.

(Sadly, this is not that clip, but rather 3 versions of the Shell ad with Michael Holliday singing.)