Live-blogging The Duchess of Malfi 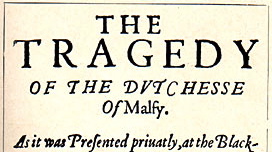 22:26: Hmmm. Really interesting to see, but definitely problematic. Final production credit is Globe on Screen in association with BBC Arts.

22:23: I didn’t think this closing worked in the theatre, and the broadcast hasn’t changed my mind.

22:22: At two and a half hours, this is a lot of television – and length is one of the key problems with theatre on television, at least as far as the executives are concerned. I wonder what the figures are – which we’ll learn tomorrow.

22:13: Yet so few of the great lines really land, although I’m more inclined to lay this at the inadequacies of the stage production, rather than the problems of translating to the screen.

22:08: Was this, I wonder, recorded at a single performance? I have now become distracted by trying to work out whether the audience is precisely consistent across all of the shots. It seems to me that there is a woman in a white jacket stage left in the back row of the first gallery who is sometimes there and sometimes not.

22:00: I really, really think theatre on television can be more effective than this. A production with more sense of scale and difference, and with more subtlety, is needed. And the possibility of doing more with the images, more light and shade, more movement, more responsiveness to the drama.

21:31: Darkness on stage means that we don’t see the audience and the few candles give direction and shape and focus.

Broadcast worked better in the first few minutes of pt 2 than at any other point, with the pool of lights and the black being v black #Malfi

21:23: Starting the second part and the single candles in the dark create striking Caravaggio-like effects.

21:20: Interval, with Andrew Marr offering a re-cap – and an odd kind of trailer with ‘highlights’ of Acts 4 and 5. ‘A word of warning – the play is about to get darker, literally… Your screen will go black. IT WILL GO BLACK.’ We’re away from the action for less than two minutes.

21:18: I’m sorry, but this confirms what I thought in the theatre: Gemma Arterton simply isn’t a Duchess of Malfi.

21:07: But overall I fear it’s not ‘working’ on screen as well as I would wish – if, that is, we want to see more theatre on television. If this is regarded as less than a success then it will be too easy for those who don’t want to see further productions to point to this and suggest that the form is inappropriate for the small screen. But I don’t believe that, and I want to understand why this is much less satisfying than a NT Live or Live from Stratford-upon-Avon broadcast to cinemas. Can the weaknesses be blamed on the stage production? Or is doing this from the tiny space of the Playhouse deeply problematic?

21:00: Maybe it’s David Dawson as Ferdinand, or perhaps it’s because we’re moving from comedy to tragedy, or towards the dark, but it feels as if it’s working more effectively now.

20:48: The tone of contemporary comedy really isn’t to my taste. Apart from anything else, I feel it sometimes works against the beauty of the language.

20:43: Much as with the recordings made in the main Globe, the audience is very present here. I find this distracting, making it hard to stay “in” the world and time of the play. Instead, I am constantly distracted by the expressions of those watching. I know that it is crucial for screen versions of stage performances to include the audience but perhaps this needs to be general, distanced, shaded, non-specific, rather than with the particularities of contemporary life.

20:41: The sound is very clean and clear, but like the illumination very even, with little sense of space and perspective.

20:39: Many of the close shots with hand-held candles look very strong, but in the wides a lot of general light seems to spill across the stage in this nighttime scene.

20:30: Anyone attracted by the facile comparison with Tarantino must be feeling a bit bemused by now…

20:24: Not only does it lack shading in the images but also in performances. The Duchess and Antonio together is a gorgeous love scene but is being played as over-pitched comedy. What I can’t quite work is what effect the transfer to the screen is having on what I think lacked subtlety on stage.

20:22: The light is very even across the figures, with no sense of direction from which it is coming. No shadows.

20:18: When I saw this in the theatre I felt too many of the performances were rather one-note, and I again feel that’s the case.

20:14: The image so far is very bright and sharp, with the precision of video rather than any kind of film ‘look’. Some of the cameras have very wide-angle lenses.

20:10: Cameras looking at stage from the front and side, and also shooting from the stalls gallery up-stage through the cast and out into the audience. No movement, at least so far; all the visual story-telling coming from the mix/edit, not from developing shots in any way. This presumably because the space is just too small for tracks.

Oh no. I’d forgotten just how annoying I found the twinkly music throughout this Malfi.

20:03: ‘John Webster was the Quentin Tarantino of the old English theatre.’ Hmmm.

20:00: Andrew Marr welcome us to ‘the televising of a spanking new production…’ Introduction to the Playhouse and the candles, costing £400 per show. ‘Now it’s bold and perhaps crackers to be attempting television by candlelight.’

19:51: I was a huge fan of the 2012 Old Vic production with Eve Best and I greatly admire the 1972 BBC television production with Eileen Atkins directed by James MacTaggart. My detailed Screen Plays blog post about the latter is here.

19:49: I should say that I saw an early preview of this production – and was, to be frank, disappointed with it. Gemma Arterton, while sparkling in the early scenes, did not for me have the tragic range that the role requires. But I’m not sure my critical faculties were at their most acute, given how unbelievably uncomfortable was my £45 pit seat. Tonight, the broadcast is just one element of what I get for my licence fee – and my sofa has soft cushions and a back against I can lean.

19:43: There does feel as if there is a bit of a sense of occasion about tonight, as indeed there should be. This is – I believe – the first television broadcast of a classic stage production from the theatre for which it was created for more than a decade. We have to go back to the early days of BBC Four for the last one, which I think was a close-to-unwatchable Three Sisters. Since then, of course, theatre on screen has been transformed by NT Live, Digital Theatre, RSC Live from Stratford-upon-Avon and others, but television has stood aloof. Now with a new commitment to performance from DG Tony Hall, this is the opening offering from what may become an important series of such broadcasts.

19:34: … and here are a couple of my earlier posts about #Malfi (my preferred hashtag for the night): Off-message and on- with Malfi and Malfi light and noir.

19:28: … and another, an Adam Sherwin news piece for the Independent, ‘Gemma Arterton says live theatre should be experienced on stage not screen relays’: ‘To be quite honest, I don’t really believe in filming theatre, that’s not what it’s about. I felt quite uncomfortable about the fact they were filming it at first – it’s theatre, you’re not performing it for the cameras.’

19:26: One piece of prep – The Duchess of Malfi – BBC Arts at the Globe is the Radio Times preview piece, illustrated with a fetching photo of Andrew Marr; buried in there is this warning, ‘The tiny, historically accurate Sam Wanamaker Playhouse is a more interesting place to visit than watch.’

19:09: Blogging along with a television broadcast is, I know, so 2008 – and I will also be keeping an eye of Twitter – but I want to try to record my (non-snarky) thoughts about tonight’s recording of The Duchess of Malfi from the Sam Wanamaker Playhouse. The BBC Four broadcast starts at 8pm, but in the meantime, take a look at my thoughts about the James Shapiro curtain-raiser documentary that was last night on BBC Two and is playing out again now on BBC Four.