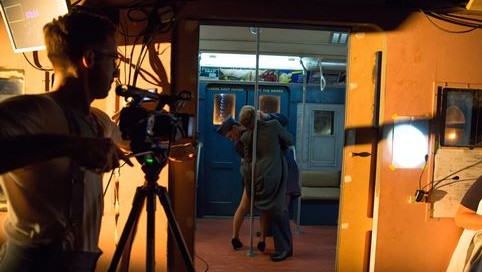 To Cinema 1 at the Barbican for a live stream of The Forbidden Zone from the Salzburg Festival. Written by Duncan Macmillan and directed by Katie Mitchell, this new work premiered last Wednesday, plays Salzburg for another week and then goes to the Schaubuhne in Berlin. (A download of the programme in English is available here.) For one night only, and to one screen only, this innovative relay came to the Barbican as a co-commission with 14-18 NOW, WW1 Centenary Art Commissions. Surprising and fascinating it most certainly was, as well as emotionally engaging.

As background, this video from 59 Productions includes rehearsal footage and an interview with Katie Mitchell:

As you perhaps know, Katie Mitchell over the past decade and more has been exploring a hybrid form of performance which involves creating a ‘live film’ while a theatre work is playing out on a  stage. Actors and camera operators are choreographed with a small number of digital cameras to present a screen version of the action as a live mix, often created by Leo Warner, projected above the performance area. The musical score and sound effects are often created live as well. The audience simultaneously watches both the stage action – although key parts of this are often obscured by sets – and the live mix.

The experience in a theatre is compelling, not least because of the skill with which the team achieves (and sometimes just fails to) the split-second timing of the movements that are necessary. But this form is also a rich experience, or should be, because of the gap between the stage action and the live mix and of the ways in which this prompts questions about the specific performance and performance in general. There are those who find it all academic and uninteresting (‘why doesn’t Katie Mitchell just make a film?’ is a frequently asked question), but despite the occasional obscurities I find it thrilling to see this playing out. And with all of the fast-moving debates about live theatre, cinema broadcasts, digital mediation of performance and more, this work feels contemporary in a most welcome way.

Adapting all of this to a live satellite stream tonight added a further level of mediation. What we saw on the Barbican screen was a combination of three channels of video, with the live video mix in the top half-and-a-bit of the screen and below two shots (which varied only occasionally) offering long shots of areas of the stage. The effect was not dissimilar to image in the text above, although the top video mix was more dominant, being a little larger, brighter and with much more variation over time.

More than any of the Katie Mitchell productions I’ve seen before, the video mix carried a high level of cinematic sophistication. The shots – each one achieved by the live placement of the cameras – were immaculately framed, often beautifully lit and always presented to develop and extend the story-telling. The mix too was compiled to move forward the narrative in a classical manner, and it dealt with multiple layers of historical time including ‘live’ flash-backs with the same characters played by two different actors. (I was curious about some of the very brief flash-backs towards the end as to whether all of these were done live, or whether some fragments of previously recorded video was played into the mix – the fact that I couldn’t tell was a further indication of how achieved the performance was.)

Inevitably the video mix was what I watched for much of the time, not least because the text was in both German and English (and a little French), with English and German subtitles, and this pulled both the eye and the ear. But the cameras showing the wide shots of the stage were a consistent and coherent counter-point to the video mix, and these images contributed in essential ways to the experience as a whole.

From all of which you might think this was little more than a spectacle of technology and timing. Yet the performance, which ran for around 70 minutes, was involving, powerfully expressive and provocative. One strand focussed on the chemist Clara Immerwahr who during the First World War attempted unsuccessfully to prevent her husband developing poison gas for use by the German army. A second told of Clara’s grand-daughter Claire a generation later in the United States. She too was a chemist, and she was working to develop an antidote to a later form of poison gas when research funding was diverted elsewhere. Both women were driven to suicide. And then there were the memories of Claire’s supervisor who had been a nurse at the front in French treating allied soldiers dying from gas attacks. Complementing the drama were declaimed statements written by women, including Virginia Woolf, Hannah Arendt and Simone de Beauvoir, against the male imperatives to war.

The concerns of the drama are, of course, always with us, but tonight they felt particularly powerful against the events in Gaza of the past fortnight.