The making of Shakespeare Live! 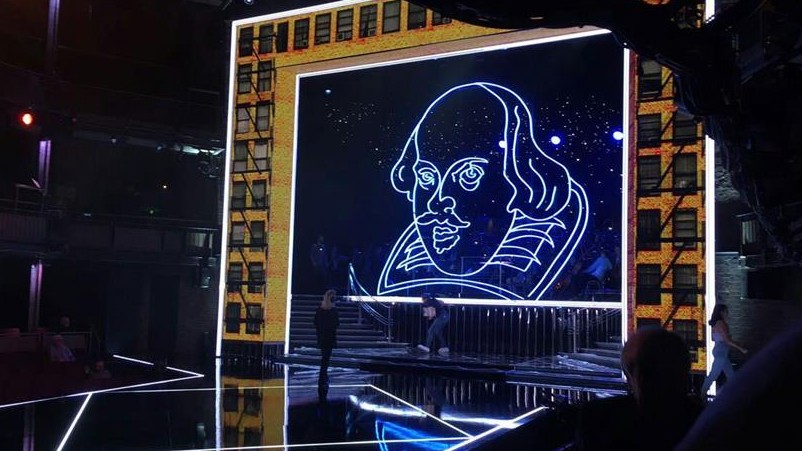 Saturday night’s celebration of Shakespeare on BBC Two and in cinemas, Shakespeare Live!: From the RSC, started life back in November 2013. Illuminations was not involved as a production company, but in my role as Director, Screen Productions for the RSC I have been working towards Saturday’s realisation ever since then. You can judge for yourself as the programme is on BBC iPlayer for another 28 days but I think it’s fair to say that those of us involved in the project are happy with its realisation. And of the many highlights this is the one that has attracted most of the attention:

Shakespeare Live! began with a conversation between Gregory Doran, Artistic Director of the RSC, and the BBC’s Director General Tony Hall, which was followed up just before Christmas over two years ago with a meeting that Greg and I had with Jan Younghusband, Commissioning Editor, BBC Music and Events, who has been hugely supportive throughout. Following which, Greg e-mailed the idea that the RSC and the BBC might collaborate on an event

On or about 23 April 2016, live or “as live”, from the RST [Royal Shakespeare Theatre] in Stratford and possibly other venues in Stratford, in the USA and perhaps even elsewhere. This might mix classic scenes with RSC alumni with examples of Shakespeare’s legacy, especially in music – to include opera (Purcell, Verdi, Britten?), Broadway (Kiss Me Kate) and the songs, in “authentic” or new arrangements.

As things turned out, Verdi and Broadway made the cut while Purcell and Britten fell by the wayside.

Throughout 2014 Greg continued to refine his ideas and to introduce the project to the company while the RSC shaped the ways in which it would mark the 400th anniversary of Shakespeare’s death. Still ongoing, these include a tour to Beijing, Shanghai, Hong Kong and New York, the extraordinary production by Erica Whyman of A Midsummer Night’s Dream: A Play for the Nation which is criss-crossing the country with amateur actors playing the mechanicals and fairies (and is itself the focus for a number of BBC programmes coming in May), the re-opening of the Swan Wing and The Other Place in Stratford, and landmark productions, including a much-anticipated “digital” take on The Tempest forthcoming in the autumn.

In the autumn of 2014 I went with a RSC party to the Brooklyn Academy of Music to explore the feasibility of the broadcast coming simultaneously from one of their theatres, where it was planned that the RSC’s King and Country cycle would be playing (as indeed it is, to great acclaim). Sadly, however, budget constraints, together with the logistical complexities approaching those of Live Aid, ruled out a transatlantic tandem for the evening. Instead Greg concentrated on conjuring up a wish list of contributors that might feature, as MGM used to boast, ‘more stars than there are in heaven’ and reworking a possible running order. There is a draft from May 2014, for example, that starts with the balcony scene from Romeo and Juliet followed by ‘Tonight’ from West Side Story and includes several other elements that were there on Saturday. These include what we then calling the ‘line of Hamlets’, Duke Ellington, and not one but two songs from Kiss Me Kate; as things turned out ‘Brush Up Your Shakespeare made it, but ‘I Hate Men’ did not.

On Shakespeare’s birthday in 2014 the RSC welcomed a coach party of BBC folk to Stratford to brainstorm ideas for what might be done two years hence. In August we started to discuss specifics with BBC Head of Events Phil Dolling who ever since has been the project’s executive producer and a much-valued collaborator, and Phil began to assemble a BBC team that eventually included producer Catherine Stirk and television Bridget Caldwell, both of whom have been brilliant thoughout. Many of those on the camera, sound and technical crews on Saturday had worked with us on the RSC Live from Stratford-upon-Avon cinema broadcasts, and established relations with the brilliant RST technical teams meant that things came together very efficiently last week.

Other possible projects with the BBC, including films on Shakespeare around the world and Shakespeare and music, came and went, but what we fiercely resisted calling a ‘gala’ (too stuffy as a description) stuck firmly on the agendas of both organisations. By December 2014 we had a fully worked out running order that is not far off Saturday’s. albeit with one or two hoped-for names who, for entirely understandable reasons (like being on stage elsewhere), did not ultimately make it to Stratford. Among the promises is this:

As the evening ends we cut to outside the Theatre where the magnificent fire drawing of Shakespeare’s face (based on the Droeshout drawing) is ignited in front of the RST, to the applause and cheers of the thousands of people who have gathered on the Bancroft Gardens to watch. They include the one hundred amateurs from all around the country, who have joined us dressed (by the RSC Wardrobe) as characters from Shakespeare.

The one hundred characters of Shakespeare was another notion bitten by reality, but the fireworks – mounted by Emergency Exit Arts – most definitely delivered. And indeed we had a dry run with these as part of the birthday celebrations in 2014 when the ‘burning head’ was first set aflame. This event gave us photographs and video footage that were extensively used in the marketing for Saturday, for which by the nature of it being live we had little else to offer. By April 2015 there were regular RSC planning meetings about the details of everything that was going to be mounted in 2016, and that was also when the RSC and BBC jointly made the first announcement of what came to be called Shakespeare Live!

Not that we had all of the budget secured by then, nor indeed until early this year. One other key thing we were lacking was an agreed title, and it’s possible that this occupied more discussion for well over a year than any other aspect of the project. The Shakespeare Spectacular. The Shakespeare Show. Shakespeare and Friends. 1616 and All That. Strictly Shakespeare. You can see the problem. But once we settled on Shakespeare Live! From the RSC even those who were still defiantly called it the ‘Gala’ started to come round.

The RSC Head of Music Bruce O’Neil was determined with Greg that we would have a full orchestra on stage – something that the theatre had never witnessed before. And early on he brought on board Orchestra of the Swan to create a wonderfully rich and dense sound, especially when the 68 players were supplemented by 44 members of the chorus of English National Opera and 10 principals for the climax of the Verdi’s Falstaff. Bringing all of those people to Stratford for rehearsals and the performance, feeding and in some cases housing them, not to mention getting them on and off stage at the right moments that was taken on with great good humour and extraordinary efficiency by assistant producer Jake Bartle, deputy stage manager George Hims and, the true heoine of the night, stage manager Linda Fitzpatrick.

In the summer of 2015 we assembled for our internal use an edit of bits and pieces scrounged from Youtube and elsewhere of versions of the speeches and songs we were envisaging including in the show. This gave us a sense of how the whole piece might fit together and proved to be eye-opening in a number of ways, not least because the extract from A Midsummer Night’s Dream came from Peter Hall’s 1968 film in which one of the brightest stars of Saturday night, Judi Dench, plays Titania with rather fewer clothes than she wore for us opposite Al Murray.

By the late summer the invaluable and unflappable stage producer of Shakespeare Live!, Hedda Beeby, was on board, and she started the serious (and intensely time consuming) business of pinning down the promises of participation made by actors and singers in response to Greg Doran’s initial approaches. Co-host David Tennant was one of the first to be confirmed, even if we had to re-work the schedule of his appearances in Richard II at BAM to permit him to fly back to Britain last week and return to New York for two final performances this coming week.

Much of my time since the autumn has been involved in ever more complex discussions about possible co-productions and distribution deals, and eventually we worked out that BBC Worldwide would take most of the global rights in the show although Picturehouse Entertainment, with whom the RSC works on its Live from Stratford-upon-Avon screenings, could take Shakespeare Live! to cinemas in the UK and Europe. Even then, we only actually signed a long-form contract three days before transmission (not that this is so exceptional on complex projects like this).

Ticketing arrangements for those who would be in the auditorium took up hours and days and weeks of effort, stretching the reduced number of seats (some 250 RST positions were taken out by the 17 cameras), across all of those who the RSC and BBC would have liked to invite. Designer Rob Jones, who worked with Greg on Hamlet, started to conjure up the visual magic of a set with a video proscenium, a shiny floor, a retractable ‘tongue’ and three levels for Orchestra of the Swan – all of  which, in my humble opinion, looked just glorious on screen on Saturday. And then it has been an organised and structured scramble since the beginning of the year, with rounds of recces and rehearsals, meetings about budgets and about parking, about security and social media, as well as thrilling confirmations and one or two reluctant withdrawals.

Just over a week ago, starting on Saturday night, the current production of Hamlet,  with another star on Saturday, Paapa Essiedu, was de-rigged from the theatre and our stage and set started to go in. The BBC’s trucks and cameras arrived on Wednesday and rehearsals began in earnest on Thursday — although what the line of Hamlets had mutated into was only run with all of its participants for the first time on Saturday at 5.30pm. Which was after we had done a dress run at 1.30pm, when we all saw something of what we had created from end to end for the first time.

Even in the dress rehearsal we had assistant director Josh Roche walk on with a’Benedict Cumberbatch’ sign round his neck, since filming commitments meant that our distinguished contributor could not arrive until later in the afternoon. Just the sign alone prompted an excited laugh from the friends and family of the RSC who had been invited to witness this initial run. Also absent, and played in the run-through by Greg himself, was Prince Charles, whose participation had been a well-kept secret for a number of months. Greg had been determined that the show would contain surprises, and what Guardian critic Michael Billington has since called ‘a mildly diverting sketch’ emphatically delivered on this.

As you might have noticed, we overran by 24 minutes, but BBC Two very kindly kept us on air as we went from Helen Mirren as Prospero to the beautiful benediction out of A Midsummer Night’s Dream, with everyone in the audience holding up a flickering electric candle, to a curtain call and outside to the firework finale. Within minutes, even as Prince Charles was being introduced to the cast and creatives backstage, and as photos and videos of his appearance were beginning to be beamed around the world, the theatre crew was starting to strip out the neon head, the shiny floor and the video screens so that the new production of Cymbeline could come in for its tech run through and first previews in the coming week.