Reflections from the RA 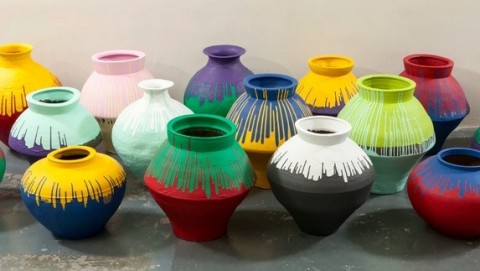 Tomorrow night Sky Arts premieres our new film for The Hot Ticket strand, Ai Weiwei at the RA. We have already produced Matthew Bourne’s The Car Man as a Hot Ticket and next week we are recording another major performance event for Sky. But this programme is a little different, most obviously because it is not a concert, play or dance event. Sky want their new series to embrace the whole range of the arts, including major exhibitions, and so we set out to find a more distinctive way than is usually employed to present a big show on screen. I am delighted with what our team has achieved, which I believe (and as I want to try to detail below) is modestly innovative – and the whole experience has made me enthusiastic to try to build on this the next time we get the chance to make a programme like this.

Ai Weiwei at the RA is directed by two really smart young filmmakers, Aneil Karia and our own Todd Macdonald, and is produced by Linda Zuck and myself. When we started thinking about this earlier in the year, we decided early on that we would not work with a single presenter but rather try to reflect in interviews a range of different views. We also wanted to explore the idea of a true virtual visit to the show, replicating as closely as possible the structure of the Royal Academy of Arts exhibition (which opened last month and runs until 13 December). And we thought that we might try some different kinds of filming techniques as well as techniques for responding to the artworks. Thanks to the smart ideas and visual flair of Aneil and Todd, thanks also to a great team of collaborators Including Director of Photography Brian Fawcett and editor/graphics whizz Joseph Pierce, and with further fulsome thanks due to the generosity of the RA Press Office and the artist’s studio in Beijing (as well as the support of Sky Arts), I think we have achieved something towards each of these aspirations.

The exhibition is curated by the RA’s Tim Marlow and Adrian Locke, and both of these eloquent figures contribute to the film, as does the RA’s Head of Architecture Kate Goodwin. Each of these speaks about specific aspects of Ai Weiwei’s practice, but the film also hears from several eminent academics: Linda Yueh, a well-known economist at the University of Oxford; Craig Clunas, Professor of the History of Art, also at the University of Oxford; and William Callahan, Professor of International Relations at the LSE. Each of these brings an understanding of modern China and of the artist’s work which is perhaps a little different from the dominant discourse of the art world, and for me the film feels richer as a result. Moreover, we have managed to make a 65-minute programme without an on-camera presenter or indeed an off-camera narrator. Rather we have different kinds of statements that I hope echo, complement and occasionally contradict each other.

Some of those statements are also poetic, for we have Jemma Redgrave and Dandan Liu performing three poems written by Ai Qing, an eminent literary figure who was Ai Weiwei’s father. And we have a group of “observers” who recall on camera what they have seen inside the boxes of the dioramas that make up S.A.C.R.E.D., 2011-13, a major installation by Ai Weiwei that recreates scenes from his incarceration by the Chinese authorities. And of course the artist is present too, in an interview conducted by Tim Marlow in Beijing, when it was thought earlier in the year that he would not be able to travel to London, and in scenes from a walkaround of the show.

I hope too that the artworks themselves are strongly present in the film, and that by being featured at some length they can assert their integrity and make their own statement. We have filmed them with cameras on dollies, on a Steadicam-like device and – in the courtyard – mounted a jib, as well as in more straightforward ways. Many of them are commented on, and perhaps partially “explained” by one of our commentators, but others are featured with more allusive elements. Bed, 2009, for example, has a contour that outlines the boundaries of China – but rather than put that into words we associate shots of the artwork with a developing graphic that simply suggests the connection. For other scenes, we have filmed in a carpentry workshop, smashed a group of pots and drawn on a disparate range of archive films, including several made by the artist himself.

The film works with a modular structure, so that after the courtyard at the start each gallery is visited in turn, and we aimed to bring distinct techniques to each of them. Which means that the film is in many ways a sequence of 12 shorts, which again reflect on and respond to each other. The film devoted to the gallery housing the artist’s monumental work Straight, 2008-12, uses films made by Ai Weiwei about the earthquake that prompted the work and his subsequent investigations, whereas the film for the gallery in which Fragments, 2008, is displayed is constructed around the performances of Ai Qing’s poems. Working in this way demands more time with the works than is usual for review-type programmes, and Sky and the Royal Academy have been generous enough to offer us this.

In many ways Ai Weiwei at the RA is a conventional “gallery tour” but to us it immodestly feels more ambitious and perhaps more imaginative than many. I know that nobody comments on blog posts these days, but should you get the chance to see the film, do please let us know your thoughts below.