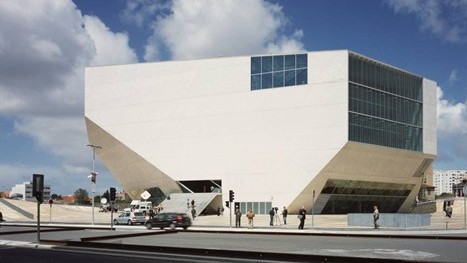 For the past several years I have been delighted to contribute some classes to the MA course in Critical Writing in Art and Design at the Royal College of Art. With the course leader Professor David Crowley, the students and I explore examples of screen-based media about the visual arts, many of which are drawn from British television. So we look at recognised classics like Civilisation, Ways of Seeing and Pop Goes the Easel (see yesterday’s post) as well as perhaps less obvious programmes like State of the Art and A Bigger Splash. For the fourth of my classes I ask the students to present an example of web-based video that they find interesting, and today one of them contributed this trailer for REM, a documentary about the architect Rem Koolhaas, which is being made by his son Tomas (there’s an Arch Daily interview with him here, with further details about the project). It’s a terrific short film, surprising and beautiful and imaginative, and a very original way of engaging with the spaces of a building (which is the Casa da Musica, Porto, above in an image from OMA).

OFFICIAL TRAILER FOR ‘REM’ DOCUMENTARY from tomas koolhaas on Vimeo.