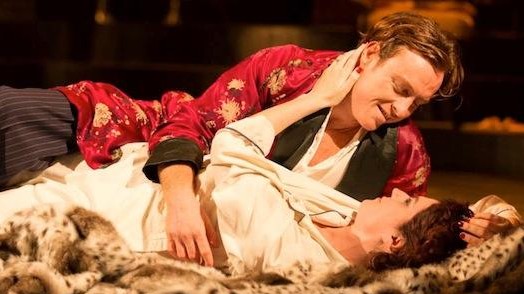 Digital Theatre were kind enough to invite me to the premiere last night at Cineworld Haymarket of their new recording of Private Lives (above). Perhaps it was unfortunate that, as I wrote in part 1 of this post, I went with the images and sounds of Richard II Live from Stratford-upon-Avon vivid in my memory. Noel Coward’s comedy is a very different beast from Shakespeare’s lyric tragedy, and the respective approaches to translating a stage production to the screen are different too. Nonetheless, I couldn’t help but make comparisons throughout. Nor can my comparisons be in any sense objective, given my deep implication in the cinema broadcasts from Stratford. Yet it seems important that those of us involved in this hybrid form of ‘live cinema’ begin to develop a critical dialogue about what it is we’re doing and what – beyond the box-office – makes for success or failure.

Private Lives is an as-live recording of the Chichester Festival Theatre production directed by Jonathan Kent of Coward’s comedy of two upper-class couples. I need to admit here that I am no great fan of the play, which seems to me froth of the most inconsequential kind with only a handful of jokes that play well today. But I can see from the screen that the cast, and especially the radiant Anna Chancellor, served it wonderfully, and that the show had an infectious energy and spirit, as you can glimpse in this trailer.

The staging was a sell-out success at the Gielgud last summer, and so as with NTLive, Live from Stratford-upon-Avon and similar initiatives, it’s important that those who couldn’t get a ticket, couldn’t get to London or simply couldn’t afford Shaftesbury Avenue prices, have the chance to experience it. But of course none of these stage-to-screen projects offers straightforward and unmediated access to the original production.

Most obviously, this Private Lives differs from the productions on offer from the National Theatre and the RSC because there is no option to experience it live. Which, for me, is central to this kind of offering – the shared social experience, lived through at the same time as the audience in the auditorium, is hugely important. And last night I felt that, even with a sympathetic audience in the cinema of cast, crew and friends, Private Lives came off the screen a little too leadenly.

Digital Theatre decided not to present the show in its theatre setting, so that neither at the opening nor throughout the action do we see anything of the audience. Nor do we see beyond the stage, which is always observed by the cameras from within the proscenium arch. We hear the theatre audience enjoying the jokes, but without context this felt to me too close to a sit-com laugh-track.

The action has been caught by multiple fixed cameras, which I guess were all fixed and without human operators. I say this in part because there are occasionally unbalanced framings and heads too close to the top of shot. Moreover, there are no camera moves, nor any changes of frame during shots. Which means that the hard edits from shot to shot quickly fall into a rather relentless rhythm. Again I stress this is my subjective response, but the visuals and the pacing seemed to me less satisfying than that achieved by the tracking, crane and dolly shots, and by the shift and developments within the frame, orchestrated by Richard II‘s screen director Robin Lough and our team. The effect in Private Lives is too close to that of a television sitcom playing out on a big screen.

The fact that Private Lives is a four-hander, and for much of the time only pairings are on stage, is unquestionably a challenge for the screen director. She or he doesn’t have the rich variety of individuals and groupings offered by any production of Richard II. I’m not privy to the economics of Private Lives, but Richard II – although I know it was done cost-effectively with tight controls – was in no sense compromised by its production budget, which even stretched to a 44-foot crane arm inside the theatre. So that too has to be taken into account in comparing the two productions.

Nor do I underestimate how hard it is to produce and distribute these theatre shows, especially in the commercial sector. Take a look at this New York Times article from the weekend, Off off off Broadway (at your multiplex), for a comparative sense of the difficulties that Broadway producers are facing as they tackle live cinema presentations. So – even if it doesn’t read like this – I admire what Digital Theatre are doing with Private Lives. Certainly I wish I liked the play better, but more pertinently  for the screen production I really wanted other decisions to have been made.