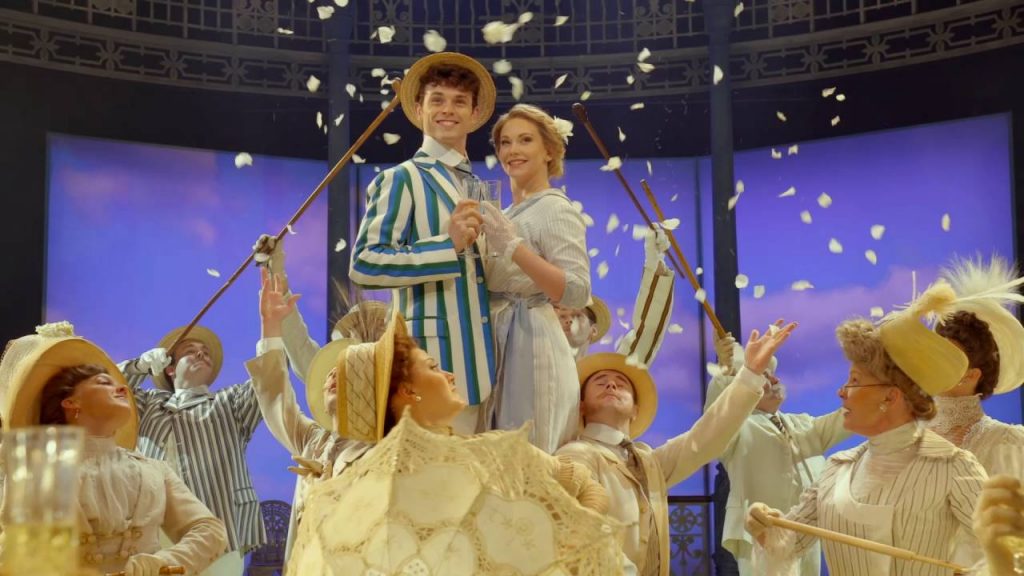 Last night, for the London opening of the Chichester Festival Theatre production of Half a Sixpence, the production’s publicists employed an up-to-the-minute medium in a manner that mimicked the early years of television. Working with Facebook Live, Half a Sixpence first of all streamed a half-hour or so of red carpet intro before curtain up. And then from late on in the performance itself, the closing minutes were shown live online, from ‘Flash, Bang, Wallop’ to the curtain calls.

Rights restrictions, I assume, account for why there’s no available recording of the second part of the stream, but you can see here Michael Underwood valiantly trying to whip up some excitement in front of the Noel Coward Theatre. All of which is pretty much exactly what the BBC television service did from the Palace Theatre nearly 80 years ago.

In the autumn of 1938, when television from Alexandra Palace had been on air for just two years, the service broadcast its first full-length play from the West End. J.B. Priestley’s comedy When We Are Married was broadcast live from the St Martin’s Theatre on 11 November, and just a fortnight later the outside broadcast unit was back before the footlights for the first night of Under Your Hat. Produced by Lee Ephraim, this musical comedy starred the husband-and-wife pair of Cicely Courtneidge and Jack Hulbert. It was a spy story with music and lyrics by Vivian Ellis, and – perhaps helped by BBC Television’s coverage of its opening – it proved to be very popular, running at the Palace Theatre until April 1940. After which Maurice Elvey directed the feature film version.

Here’s how the Radio Times diarist who wrote as ‘The Scanner’ trailed the live broadcast – and I think the similarities with the Half a Sixpence coverage last night are striking:

The Emitrons [electronic cameras] have now become West End socialites. After the televising of the Priestley play from the St. Martin’s Theatre the mobile unit prepares for another date with boiled shirts on Thursday—this time to televise the scenes at the first night of Under Your Hat, the new Cicely Courtneidge-Jack Hulbert musical comedy at the Palace Theatre.

Three cameras will be used—one to show celebrities as they pass through the brilliantly lit foyer to the auditorium; another will be installed in Cicely Courtneidge’s dressing-room, giving intimate glimpses of the two stars back-stage; and the third camera will have a box to itself in the auditorium to televise part of the first act. Those are the arrangements for the Emitrons in brief—glamour and plenty of it from Camera No. 1, a unique peep behind the scenes of a theatre from Camera No. 2, and music and fun from Camera No. 3.’

When I can think of better television material than this I’ll tell you about it.