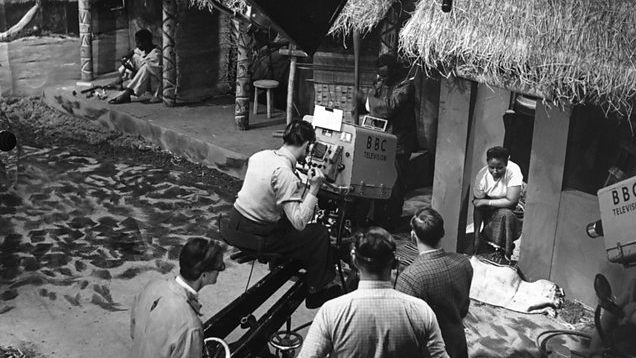 Even as I have been neglecting the Illuminations blog, for which apologies once more, I have been writing elsewhere. Today’s brief entry here points to a post I’ve written for a History of the BBC blog; below there is news of a conference in November at which I’ll be speaking on the topic of my post.

‘Starting at school: researching the 1952 BBC “School Television Experiment”‘ is a BBC blog post written as a contribution to a new strand that aims to highlight academic research exploring aspects of the Corporation’s past. I became intrigued by the 1952 pilot in which specially produced programmes (including Black and White in an African Village, broadcast from Alexandra Palace, above) were screened for a month in just six Middlesex schools. This was an experiment to see if television might be valuable as a teaching aid, and the results showed that it would. But it was to be a further five years before a regular schools service was started, both from the BBC and from the upstart ITV contractor Associated-Rediffusion.

The School Television Experiment is the focus of a paper I’ll give at the Lights, Camera, Learning: Teaching with the Moving Image conference, at Birkbeck, University of London, 23-24 November. Details of the event, which marks the 70th anniversary of Learning on Screen (of which I’m a Trustee), and a link for booking, are here.