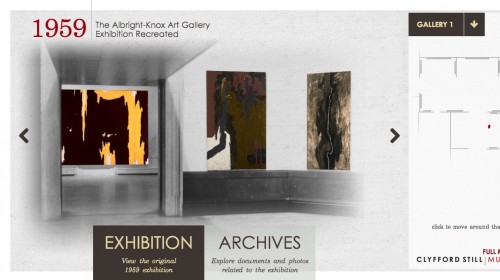 On his blog Modern Art Notes the smart, provocative and always readable critic Tyler Green publishes The Monday Checklist, an invaluable weekly round-up of the visual arts. He notes new reviews, highlights Twitter and Tumblr feeds and draws attention to interesting print and digital publications. In this week’s post he links to the new online site 1959: The Albright-Knox Art Gallery Exhibition Recreated – and here I want simply to underscore Tyler Green’s recommendation and muse a bit on why I think the 1959 presentation is so interesting. First, here’s some background in the form of a film that accompanies 1959, but if you’ve never heard of Clyfford Still it might be worth reading the Wikipedia entry before watching:

In 1951 Clyfford Still broke off his relationships with the commercial art galleries which had been representing his work. After that he pursued the presentation and dispersal of his paintings in a unconventional and highly individual manner, and the Albright-Knox Art Gallery in Buffalo, New York was one of the few museums with which he built a relationship. In 1959 he hung a major show of his work at the Albright-Knox and five years later he made a major gift of canvases. The vast majority of his other works remained in his possession and after his death in 1980 were effectively inaccessible.

His will gifted these works, along with his extensive archive, to a US city that would build a museum solely for their display (as long as there was no cafeteria or restaurant), and in 2011 the Clyfford Still Museum opened in Denver. Our Artland production team visited the site before the opening when they were making that series for the much-lamented Gallery HD cable channel, and I have long harboured the desire to go there. One day…

Now the Clyfford Still Museum has partnered with the Albright-Knox to put on an exhibition about the 1959 show, which is open until 15 June. But for those of unable to fly to Colorado the museum has put online a really neat recreation of the original show.

The presentation is simple but strong and effective. There is also a selection of archival materials about the exhibition, but the core of the presentation is a clickable map of the five galleries from 1959. Exploring this takes you to a range of views reconstructed from photographs, with each of the paintings also clickable to pages with fine reproductions. That’s it – but it works beautifully, and puts across a really strong sense of what the show 55 years ago must have been like. Go explore.