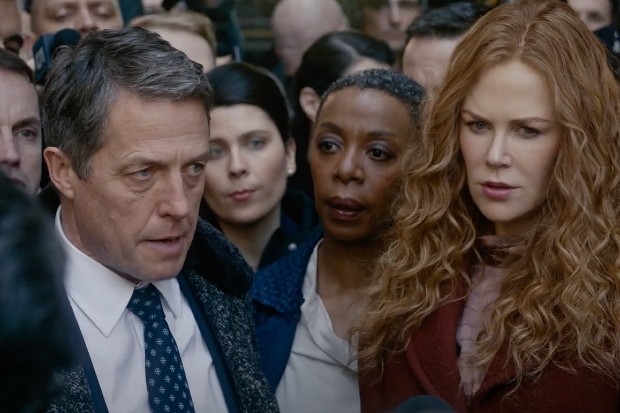 • Hugh Grant never wanted to be Hollywood’s ‘romantic Englishman.’ So he gave it up: I tend not to flag up interviews with actors, but I hugely enjoyed this encounter by Meredith Blake for LA Times — and of course tomorrow is the final episode of HBO’s The Undoing (above, with Noma Dumezweni and Nicole Kidman).

• Twenty-first century noir: an updated version of Nick James’ very fine Sight & Sound essay about ‘the potent blend of cinematic style and dark material that still inspires directors around the world, among them the most formidable names in Hollywood and in arthouse cinema: Nolan, Lynch, Campion, Mann, Ceylan…’

• The best Blu-rays and DVDs of 2020: also from Sight & Sound – a welcome annual list with lots of excellent recommendations.

• Making It Stranger than Strange: ‘The Audiovisual Essayist’ on “deformative criticism”, described as ‘a radical audiovisual critical research method that aims to make the media object somewhat strange. It eschews the conventional videographic criticism practice by using unorthodox methods to deconstruct the filmic object and by abstaining from having a foreseen end goal’:

• Thatcher’s poisonous television legacy is still being felt: for those interested in the relations between the British government and television, David Elstein for openDemocracy is fascinating on the long-term fall-out of Thames Television’s Death on the Rock report in 1988.

• ‘How did 1970s Britain enable its deadliest killer?’ Feminist revisionist remediation of the ‘Ripper’ years in The Yorkshire Ripper Files: A Very British Crime Story (2019): Hannah Hamad for CSTOnline on three series including HBO’s I’ll Be Gone in the Dark (2020) and Prime Video’s Ted Bundy: Falling for a Killer (2020), that ‘are fundamentally concerned both to give voice to heretofore silenced women, and also with the relationship of their subject matter to its social, cultural and political context, and especially as those contexts relate to feminism and feminist concerns.’

• Close encounters at the BBC Written Archives: Ian Greaves with an appropriately celebratory tribute for the BBC History blog.

• Renaissance feminism: a couple of weeks ago I included Professor Jill Burke’s video made for her art history students about visual analysis, and now she has generously shared her three part exploration of this important topic, starting here…

• The myth of North America, in one painting: another of Jason Farago’s immaculate interactives for The New York Times, on this occasion illuminating The Death of General Wolfe, painted by Benjamin West in 1770.

• The Metropolitan Museum at a hundred and fifty: writing for one New York institution, The New Yorker‘s Peter Schjeldahl celebrates another.

• An awful and beautiful light [£, but limited free access]: you will be pleased to have read Hilton Als on Joan Didion for New York Review of Books.

• Failed vocation [£ but limited free access]: perhaps the best political analysis of the week – James Butler looks back on Jeremy Corbyn for LRB by reviewing Left Out: The Inside Story of Labour Under Corbyn and This Land: The Story of a Movement.

• The way we speak now – on David Bromwich’s Writing Politics: for Los Angeles Review of Books, Sam Sackeroff reflects on how our language shapes our politics in a review of a collection of essays written between 1721 and 1964 chosen by Yale’s Sterling Professor of English.

• The timelines of our lives: Laurie Penny for Wired with a brilliant essay about time travel, Tr*mp and ‘the sensation of history holding its breath’, what Walter Benjamin called Jetztzeit:

Benjamin describes this sort of moment as the time when history is truly changeable, when the present stalks the future like a tiger hunting its prey, all bunched muscle and stored energy, ready to pounce.

• The Substackerati: Clio Chang for Columbia Journalism Review on the newsletter software Substack.

• Droitwich calling – the most pleasing Twitter thread of the week…

• The Art of Simplicity with Stuart Maconie: I tend not to recommend things on BBCiPlayer, partly because they disappear after 30 days or less, and partly because they are (appropriately) geo-locked, but this is an excellent pair of BBC Radio 3 programmes about ‘the way composers and musicians have found inspiration and innovation in the principles of simplicity and in taking things back to basics’.

• All 340 Bruce Springsteen songs, ranked from worst to best: so this is the next few hours sorted, thanks – wonderfully – to Caryn Rose at Vulture — and number one is…

The song that earns every great cliché about rock and roll. It is escape, it is freedom, it is four-chord liberation. If you don’t like ‘Born to Run,’ you don’t like Bruce Springsteen. The song distills every single element of Springsteen’s sound into four-and-a-half minutes, which contains the essential question his entire catalogue tries to answer: ‘I want to know if love is real.’