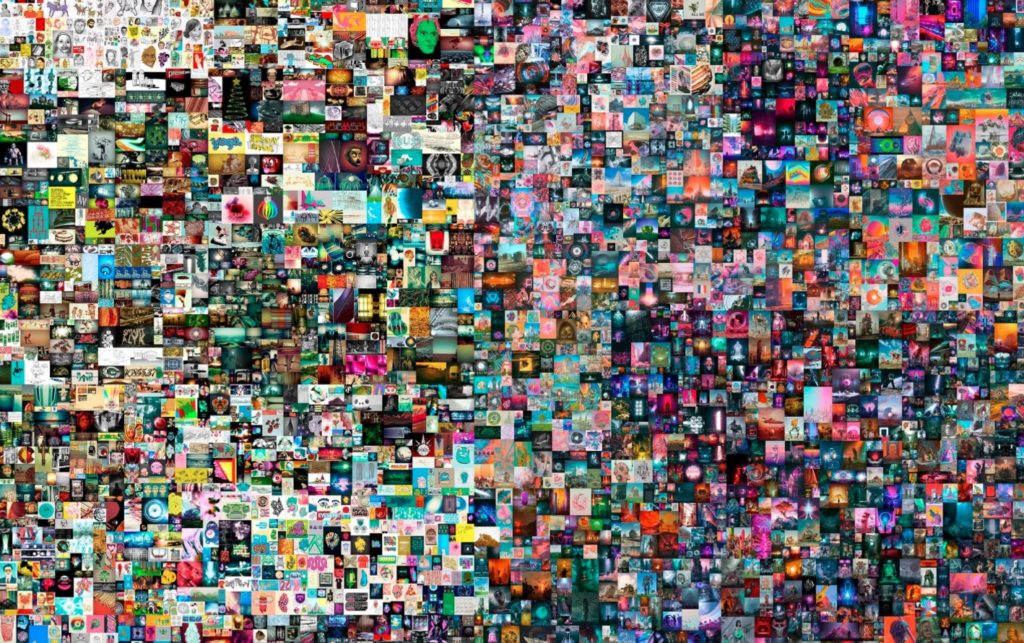 John Wyver writes: lockdown rolls on, as does the provision of a collection each week of articles and videos that I have found interesting or informative, and often both, over the past week. The list is perhaps a little less expansive than other weeks because, somehow, there’s a lot going on.

• Beepie has won. Here’s what we’ve lost: not much doubt about the art world story of the week (above is a detail from ‘Everydays’, a digital artwork bought at an online Christie’s auction for $69 million, with fees), and Jason Farago’s column for The New York Times is the best piece I’ve read about it so far:

[Johann Joachim] Winckelmann’s most fundamental insight was that a sculpture, a painting or a building was not just a thing of beauty; a work of art is a product of its time, and expresses even without trying something about the place and the culture it comes from. It is as true as ever, and certainly true about Beeple’s pictures of naked giantesses with the face of Pikachu. It is his culture now, benighted but triumphant, where puerile amusements can never be questioned and the Simpsons have displaced the gods.

• Non-fungible tokens are revolutionising the art world – and art theft: Alex Hern for the Guardian is also very good on the implications of what we have very quickly learned to call NFTs.

• Chain reaction: … and Kevin Buist for Artforum provides really useful background in a column written before the Christie’s sale:

While NFTs may not provide a material framework for the artworks riding the wave of speculative investing, they do provide an ideological one, lending a hip veneer to the latest flavor of techno-optimism. At its worst, trading art on the blockchain is a libertarian pyramid scheme built on hype and a near-total disregard for the inevitable losers of the game, whether that’s atmospheric CO2 levels or whoever is left holding an overpriced cryptographic token pointing to a digital object that doesn’t physically exist.

• How can Blackness construct America?: in another essential New York Times feature, Michael Kimmelman interviews ‘a new collective of Black architects and artists, formed out of a show now at MoMA, [which] aims to “reclaim the larger civic promise of architecture.”’

• 1932 television demonstrated in 1952: a fascinating, detailed account by Ian Baird highlighting a 1952 episode of The John Hopkins Science Review, a Dumont network programme from WAAM TV, Baltimore Maryland, which included a presentation by pioneering engineer Tony Bridgewater of John Logie Baird’s equipment used for experimental 30-line broadcasts twenty years before – and there’s the video too!

• Dancing on a volcano: Ben Schwartz is terrific on two 1938 movies about the French Revolution, Jean Renoir’s La Marseillaise and MGM’s Marie Antoinette; and this is one doozy of a trailer for the latter:

• Deformin’ in the Rain: how (and why) to break a classic film: a major scholarly essay with integrated video elements by Jason Mittell, just published in digital humanities quarterly – so much here to reflect on, and to enjoy!

• How to think about classic Hollywood’s ‘problematic’ movies: Richard Brody for The New Yorker profitably extends the discussion prompted by TCM’s ‘Reframed’ series of screenings.

• How many movies about Billie Holiday does it take…: ‘to capture her immense contribution to music? Apparently more than three.’ Ethan Iverson for The Nation.

• Authorship in the frame – Gianfranco Rosi’s Notturno: Eric Hynes for Mubi.com on the filmmaker’s engagement with ‘what the cinematic image might accomplish’.

• How Facebook got addicted to spreading misinformation: Karen Hao for MIT Technology Review on how ‘the company’s AI algorithms gave it an insatiable habit for lies and hate speech’…

• How to put out democracy’s dumpster fire: essential from Anne Applebaum and Peter Pomerantsev for The Atlantic on ways to fix political systems mired in social media and more.

• On the Road, again: as a 15-year-old boy in England, John Tottenham had pretty much the same experience of Jack Kerouac’s writing as I did, and now 40 years later and for the LA Review of Books he visits the text.

• Managing the nation: for LRB and with an acute sense of today’s politics, Jonathan Parry reads Edmund Fawcett’s Conservatism: The Fight for a Tradition:

Conservatives have ‘fought for a tradition’ against the excesses of liberalism, but also against rival strategies on the right. They defend the status quo, but have often rebelled when forced to accept its compromises. This tension is long-standing and unavoidable, but has allowed for renewal and reinvention. Once conservatism is seen in its proper historical context, Fawcett claims, there is no such thing as a ‘new right’: there are just different emphases and priorities, which each generation has repackaged to suit new circumstances, enabling it to cope with, and triumph in, the democratic political order.

• The Pallisers on BBC Sounds: I know this has been available for well over a year, but I’ve only just found this six-part audio adaptation of Anthony Trollope’s Victorian political saga – and I’m here to tell you that it’s a joy of the first order. Dramatised by Mike Harris with Jessica Raine and Tim McMullan leading the cast.