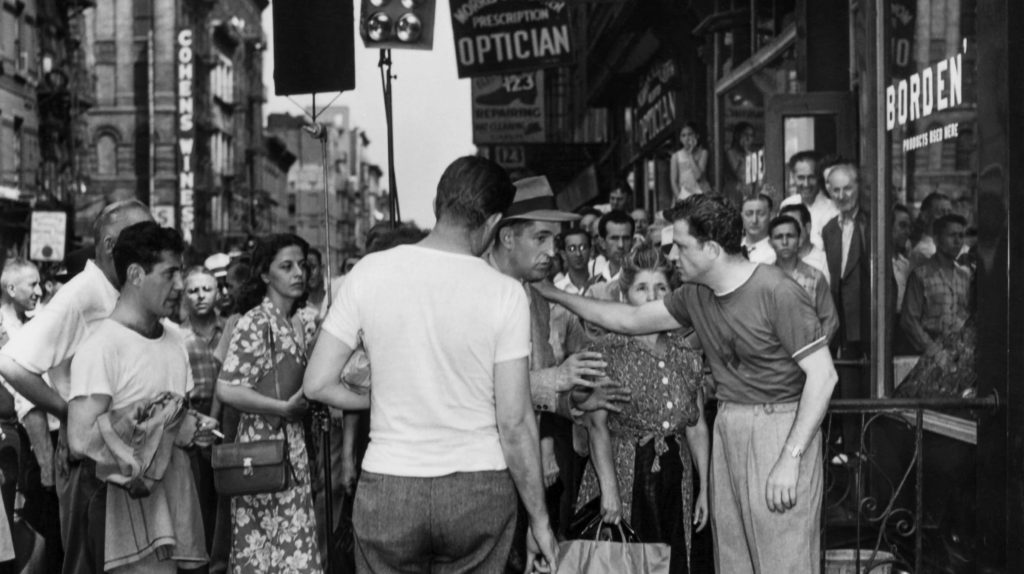 John Wyver writes: ahead of the limited easing of lockdown here’s another selection of links to articles and videos and threads that have caught my attention in the past week. The list is a little more limited than usual – apologies, but there’s a lot going on at the moment.

• Merrily he rolls along: A belated birthday tribute to Stephen Sondheim: a wonderful David Bordwell essay about the composer and lyricist, and about modernism, popular storytelling and mass culture.

• The making of Billy Wilder: courtesy of The Paris Review, a compelling excerpt from Billy Wilder on Assignment: Dispatches for Weimar Berlin and Interwar Vienna, edited by Noah Isenberg and translated by Shelley Frisch, published by Princeton University Press.

• Walkers in the city – Jules Dassin and Bruce Goldstein in New York: for Criterion’s The Current, Michael Sragow speaks with Goldstein about his short-form documentary Uncovering ‘The Naked City’ on the making of Dassin’s 1947 movie; the wonderful header image, taken from the feature, is of Dassin directing Ted de Corsia on Rivington Street.

one can sense [in Greenaway’s work] the fraught and unresolved relationship that Great Britain has to the Continent… Like his compatriot Derek Jarman, Greenaway adopted European cultural analysis as a way to provincialize Britain, to subject the nation to critique while at the same time mitigating its intellectual isolation. In contemporary terms, Greenaway’s cinema is the opposite of Brexit, an attempt at a full and unapologetic “Brentrance” into the larger expanse of European culture.

• The Travelling Players: … and for the same ‘Symposium’, Christine Newland revisits another film that was immensely important to me when I was at university, Theo Angelopoulos’s 1975 epic.

• The Great American Western on page and screen: a Library of America conversation conversation inspired by the new collections The Western: Four Classic Novels of the 1940s & 50s and Elmore Leonard: Westerns, with Terrence Rafferty, Gene Seymour, Imogen Sara Smith, and former LOA Editor in Chief Geoffrey O’Brien, together with a reading and viewing list.

• Believe the hype? What NFTs mean for film: Pamela Hutchinson contributes an informative Sight & Sound feature to the developing discussion about non-fungible tokens, filmmaking and archives.

• Prince Philip was the godfather of Anglo-British nationalism: there’s lots of good reading around about the news of the past few days, but I particularly liked Adam Ramsay for openDemocracy on the links of the Prince’s life with television.

• Philip Martin (1938-2020) part one: Philip Martin on Gangsters (BBC Play for Today, 1975, and series, 1976-78): an invaluable Forgotten Television Drama post by Tom May talking with the innovative and far-too-little-celebrated writer, illustrated with a wonderful selection of screen grabs.

• Artist of sorrows and solitudes : Alexandra Harris for TLS on the English 18th-century painter Joseph Wright of Derby, and on Matthew Craske’s monumental new study of his work.

• Wild things – the beasts of Francis Bacon: Daisy Hildyard for Apollo with a very fine essay that ought to have contextualised the Royal Academy’s exhibition ‘Francis Bacon: Man and Beast’, but this has now been postponed until January 2022.

• Taylor made: with references to Proust, King Lear, Barthes and the cultural logic of late capitalism, Domenick Ammirati is very smart for Artforum on Taylor Swift’s rerecording project and the coming years ‘of ontological crisis in the Swift canon’; and there’s more from critics for The New York Times, Taylor Swift remade ‘Fearless’ as ‘Taylor’s Version.’ Let’s discuss. Plus (and needless to say every producer should read this) …

• Eric Hobsbawm in the ‘London Review’: Richard J Evans writes on the great historian’s contributions to the LRB, and introduces Anthony Wilks’ new feature-length documentary with contributions from Frances Stonor Saunders, Evans himself, John Foot, Stefan Collini, Marlene Hobsbawm and Donald Sassoon, plus lots of archive, which is now freely available on Youtube:

• Eric Hobsbawm – The Consolations of History

• Chasing white supremacy into tech’s lairs: for LA Review of Books, Tamara Kneese reviews the edited collection Your Computer Is on Fire:

A primer in tech criticism and activism, [the book] uses the underexamined past to better understand the present and shape the future. The four editors are historians of computing, and the contributors, a quarter of whom are women of color, represent varied academic fields and areas of expertise. The volume coalesces around their collective conviction that the tech world is in a state of emergency.

• Peggy Seeger – All in the Mind (Live on Later): my goodness, this with video from BBC Music is gorgeous; the song is co-written with Peggy’s son Callum MacColl. More about Peggy Seeger’s new album First Farewell here.