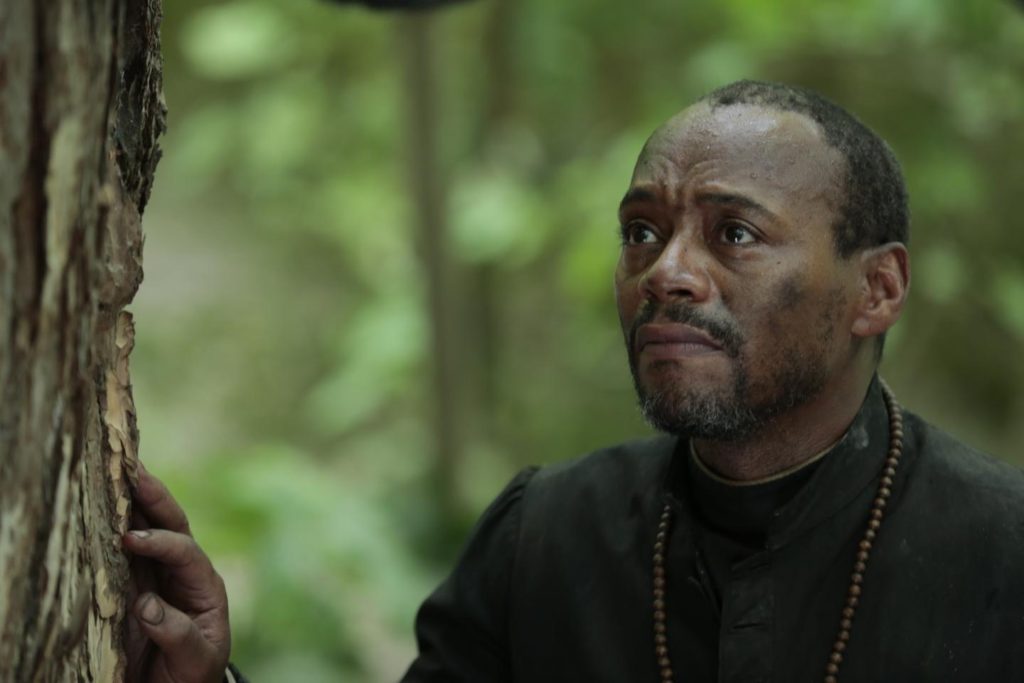 John Wyver writes: after getting The Winter’s Tale on to BBC Four last Sunday, things have quietened down a little; I’m beginning to read and watch things again, slowly, and here are some of the things that I’ve found interesting over the past week.

• Exterminate All the Brutes tracks the march of genocide: so good to see the brilliant filmmaker Paul Tickell writing for Sight & Sound on Raoul Peck’s essential four-part series (with Fraser James, above) that has just started a run on Sky:

Exterminate All the Brutes is a masterpiece to set beside Gillo Pontecorvo’s take on the Black Jacobin Caribbean, Burn! (¡Quiemada!, 1969), a film sadly neglected in comparison to his The Battle of Algiers (1966). Peck’s series is also in the same league as Ciro Guerra’s Embrace of the Serpent (2015). That film’s grotesque hallucinatory sequences in a riverside mission school capture Conrad and “the horror, the horror” of imperialism far more effectively than Apocalypse Now (1979), whose riffs on Heart of Darkness Peck references throughout this phenomenal documentary.

• Open All Night: a lovely tribute by Luke McKernan to a British film from 1934 which he watched again recently one morning at 2.50am on Talking Pictures TV.

• Film restoration today – the elusive perfect viewing experience: this is such an interesting essay by Robert Drucker for Mubi.com:

There are ample examples of restorations that turn out wonderfully, yet the same tools that are used to produce wonderful restorations can also be misused in a way that veers more towards revisionism than restoration. By digging into how and why these changes occur we begin to see the challenges and pressures those who perform film restoration are under and to better understand why there can be such a divergent quality when it comes to current restorations.

• Inside the rise and fall of The Jeremy Kyle Show – ‘It was a ticking timebomb’: Jenny Kleeman for the Guardian with a grim tale of producing popular television.

• This is a true story [£ but limited free access]: the narratives of fact and fiction in recent films, including Can’t Get You Out of My Head, The Mauritanian and The Dissident, surveyed by Toby Lichtig for TLS.

• Inside Netflix’s quest to end scrolling: a fascinating piece by Josef Adalian for Vulture on ‘how the company is working to solve one of its biggest threats: decision fatigue.’

• Television is not just for COVID: Ian Greaves for CST Online engagingly makes the case for ‘2020 [being] the most interesting year for television of my lifetime (full disclosure: I’m 43) and it’s really not too difficult to mount that argument’, while suggesting that we don’t have a critical culture to recognise and reflect on this.

• The art world knew him as Eli. How Broad was friend and foe to museums: for the LA Times, Christopher Knight (is there a better critic writing about the visual arts today?) on the life and legacy of the major LA-based collector who died this week.

• How to breathe new life into Martha Graham’s dances? Infuse them with art: Gia Kourlas for The New York Times on an imaginative partnership with Hauser & Wirth artists (with some beautiful dance images by Justin J Wee).

• Robert Saunders’ thread is so important…

• London’s imperial statues, Black Lives Matter and the culture war: this is one of those articles that will make you look at London differently, by Alan Lester at the University of Sussex Snapshots of Empire blog:

Statues tend not to have been erected during the period when Britons were most complacent about their global power. Most of the ones in Westminster date from the end of the Victorian and the Edwardian periods, when the Empire was facing new challenges from American and European rivals and anticolonial resistance. Britons sculpted their imperial figures not in triumphal self-congratulation, but in a desperate gesture of reclamation. Now that I’ve opened my eyes to them, I can’t stop seeing petrified imperial men around Westminster.

• Book review: The Filing Cabinet: A Vertical History of Information by Craig Robertson: a richly informative and thoughtful review by Sam di Bella at the LSE Blog of a new University of Minnesota Press book that I’m very much looking forward to.

• Are Google and Facebook really the future of journalism? New policies risk making it so: a deeply informed article by Emily Bell for Columbia Journalism Review.

• Token gesture [£ but limited free access]: … and Tina Rivers Ryan for Artforum; both pieces are essential for understanding the strange new world of digital artworks.

• Palestinian: another fine piece from the new LRB, with Adam Shatz reflecting on Timothy Brennan’s Places of Mind: A Life of Edward Said.

• I was 12 when we met: from Slate, a disturbing tale of grooming and assault by Eve Crawford Peyton, a former pupil of Blake Bailey, the now-disgraced author of the Philip Roth biography.

• The new battle of ideas – how an intellectual revolution will reshape society: a significant essay by Paul Collier for New Statesman.

• The Winter’s Tale (RSC) @ BBC4: … and forgive me if I close with two articles related to the project that has pre-occupied me over the past couple of months; the first is Peter Kirwan’s thoughtful, insightful review of the screen adaptation that reached screens last weekend…

• Producer John Wyver on the making of The Winter’s Tale – the first RSC production to debut on the BBC: … and the second is a lengthy interview with me that Gill Sutherland kindly contributed to the Stratford Herald, which is as much about the company’s adaptation history as it is about last Sunday’s broadcast.