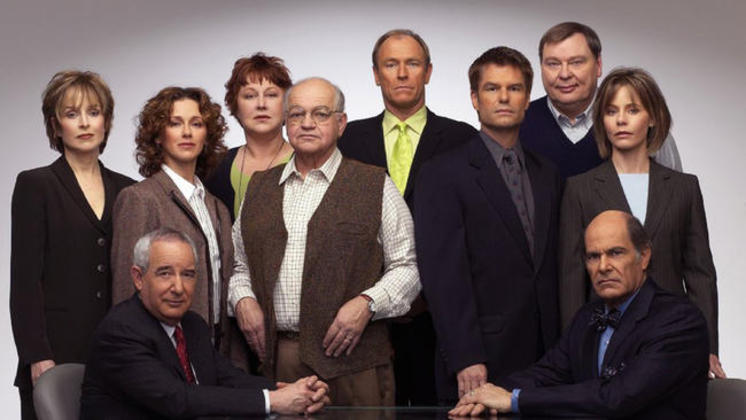 • Steven Bochco on NYPD Blue‘s crazy first year and David Caruso’s outrageous demands (exclusive book excerpt): The Hollywood Reporter runs a great read lifted from the memoir of the man who created Hill Street Blues, L.A. Law (above, and maybe on its way back to us) and NYPD Blue – oh happy days.

• How the $100 million NYPD creator gambled away his fortune: … but then there’s this remarkable story from earlier in the year, also for The Hollywood Reporter, by Stephen Galloway with Scott Johnson about the series’ co-creator (and initiator of Deadwood) David Milch’s apparent bankruptcy.

• ‘The vision thing’: … and remember this, from the final series?:

• Coming to you live: a terrific post by Luke McKernan on the importance of live news and sports ‘keeping television as television’:

Television, so often criticised for being a medium that lulled us into a state of apathy, may have been quite the opposite. We can watch television apathetically, but that is not the same thing as what it offers of itself. It offers us the immediacy of the moment, a moment that we share with all others watching at the same time. On demand separates us; television unites us.

• Why the BBC is yet to prove moving BBC3 online was a good idea: detailed, data-driven analysis from Jake Kanter at Business Insider.

• Dark passages – is The Red Shoes a film noir?: Imogen Sara Smith for The Criterion Collection on Powell and Pressburger’s masterpieces and the genre boundaries of noir; which is sufficient excuse to include all 15 minutes of this:

• Lo and Behold, the Internet, and the Movies: at Fandor Tina Hassannia spins off from Werner Herzog’s latest doc to reflect on the way the ‘net has been shown on screen.

• The Shchukin collection – Russia’s great art rescue: Kathrin Hille for the Financial Times with the background to a major Paris exhibition this autumn drawn from the modernist works collected by Russian industrialist Sergei Shchukin.

• Unraveling SFMOMA’s deal for the Fisher collection: after Shchukin, another tale of a private collection, in this case that of the Fisher family and its dealings with San Francisco’s Museum of Modern Art – Charles Desmarais for the San Francisco Chronicle asks some tough questions.

• John Bunker writes in anticipation of Abstract Expressionism at the RA: pretty much what is says on the tin, but really interesting; from Abcrit.

• The house where you live forever: a remarkable profile by Amelia Schonbek for The Awl of the architect Madeline Gins and her husband Shusaku Arakawa who believed that disorienting architecture kept people open to new ideas as well as ‘the possibility that they can lengthen their lives and, eventually, resist death entirely.’

• Photography in the real world: provocative but convincing thoughts about selfies and the like from Jorg M. Colberg for his Conscientious Photo Magazine.

• Did I kill Gawker?: a good read by Max Read for New York magazine about the demise of the online scandal sheet and American journalism in general.

• Open content at the Getty- three years later, some lessons learned: a bit specialist perhaps, but an important Iris post by Mikka Gee Conway, Marissa Clifford and Nathaniel Deines about ‘the legal and technical challenges of releasing two recent digital art history projects via open licensing’. Interestingly, it includes this (although of course this relates only to the US):

• ESPN’s drug-war epic Pin Kings invigorates multi-platform storytelling genre: Shelley Hepworth for Columbia Journalism Review on a ‘project [that has] turned into a huge effort across television, audio, print, and digital and has become an example of how to execute a multi-platform story with lots of moving parts.’

• How academia resembles a drug gang: a great read about ‘dualisation’ by Alexandre Afonso for the LSE blog.

The academic job market is structured in many respects like a drug gang, with an expanding mass of outsiders and a shrinking core  of insiders. Even if the probability that you might get shot in academia is relatively small (unless you mark student papers very harshly), one can observe similar dynamics.

• The concept of ‘cat face’: Paul Taylor on machine learning for the LRB.

• Towards an art history for videogames: Lana Polonsky for Rhizome.org begins an ‘intimate account composed of a long heritage of games deliberately concerned with the artistic, political and personal.’

• Access, accountability reporting and Silicon Valley: Adrienne Lafrance for NiemanReports is very good on the problems of writing robust journalism about the big tech firms.

• The heart of darkness that still beats within our 24-hour cities: last Sunday’s wonderful essay for the Observer by Matthew Beaumont, author of Nightwalking: a Nocturnal History of London.

• The tragic downfall of British media: Steven Barnett for Foreign Policy on the British press and Brexit: ‘it is hard to avoid the conclusion that Britain’s mainstream media failed us at a time of greatest need, with political consequences that will reverberate for decades.’

• The difficulty of ‘neoliberalism’: earlier in the week Will Davies Tweeted a link to his Political Economy Research Centre post from January, which remains an excellent analysis of the complexities of the concept in economics and sociology.

• The death of neoliberalism and the crisis in western politics: … and here’s Martin Jacques for today’s Observer

… about which Will Davies has Tweeted: ‘It knits a lot of issues together very credibly, but reads more like a review of existing analyses. We need a new conceptual framing.’

• Uncovering the brutal truth about the British empire: Marc Perry for Guardian Longreads on the complexities of Harvard historian Caroline Elkins helping to hold Britain accountable for atrocities perpetrated in pre-independence Kenya.

• ‘Another Opn’in, Another Show’: a highlight of the past week was going to Prom 44, Shakespeare on Stage and Screen, which featured, among others, Anna-Jane Casey performing songs from Cole Porter’s Kiss Me Kate – although not this, which here is arranged by Don Walker for a 2012 Prom: