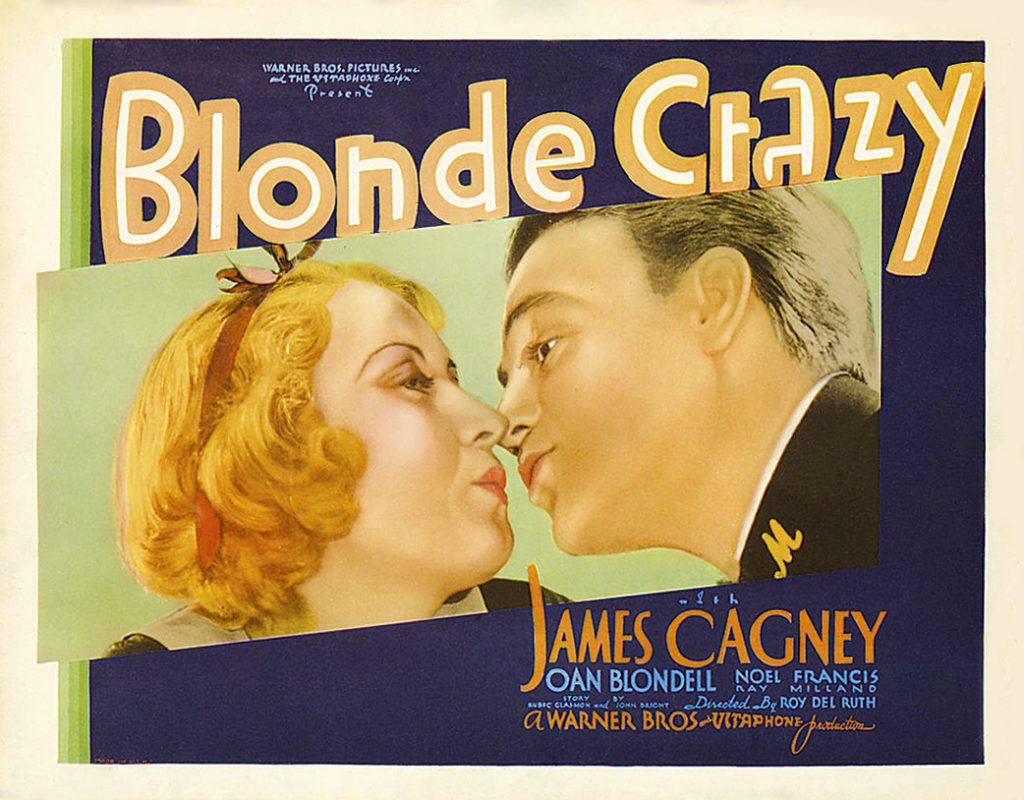 • YouTubers are upscaling the past to 4K. Historians want them to stop: Thomas Nicholson for Wired profiles Denis Shiryaev and reflects on the controversy surrounding his work with early film that has ‘cleaned, unscuffed, repaired, colourised, stabilised, corrected to 60 frames per second and upscaled [it] to vivid 4K resolution’, like this one, which is astonishing, incredibly popular (13m views and counting) and, for my money, deeply problematic:

• Joan Blondell – a fresh dame: I am very much enjoying a season of Joan Blondell films from the early 1930s (including Blonde Crazy, 1931, above), courtesy of the Criterion Channel, and this piece by Richard von Buzack for SF Weekly is a pleasing accompaniment:

These Blondell comedies and dramas are the Great Depression speaking to our own financial trough; the hard-shelled, soft-centered heroine is as fresh now as she was then.

• ‘It’s the arts’: Kristin Thompson and David Bordwell have been reporting from the virtual Vancouver International Film Festival, and this is an informative post discussing documentaries about Ulrike Ottinger in paris, Marcel Duchamp and Frida Kahlo.

• A countercultural dreamland from Tokyo flickers at MoMA: Jason Farago for The New York Times (again) on restorations of Japanese expanded cinema from the 1960s including works by Motoharu Jonouchi and Keiichi Tanaami at Pioneer Works and, at MoMA, Cinematic Illumination, 1969, by Shuzo Azuchi Gulliver:

• The seriously absurd photographs of Hollis Frampton: for Apollo, Justin Coombes reviews what looks like an essential exhibition of the work of filmmaker, theorist and polymath: ‘Hollis Frampton: Photographs’, at Goldsmiths Centre for Contemporary Art, London, until 13 December

• Stuart Hall, non-fiction pioneer: a great start to Ashley Clark’s regular column at Field of Vision, with a discussion of the 1979 Open Door programme, It Ain’t Half Racist, Mum, which can be viewed here.

• Optimism, traffic, and the historic city in post-war British planning: I have just finished Otto Saumarez Smith’s deeply informative and enjoyable study of the politics of urban planning in the 1960s, Boom Cities, just now in paperback – and here courtesy of publisher Oxford University Press is free access to the first chapter. Highly recommended.

• The demolition of LACMA – art sacrificed to architecture: an angry despatch by Joseph Giovannini from the West coast about what Michael Govan and Peter Zumthor are doing to the Los Angeles County Museum of Art:

This is a hostile takeover of the museum, and if the design succeeds in hijacking the institution, Los Angeles will be living for a long time with a wanton act of architecture, and the bitter memory of a very expensive betrayal of the public trust.

• The great anti-left show: a fascinating essay for LA Review of Books by Anthony Nadler with reflections from interviewing representatives of right-wing media in the States.

Desperate for access to celebrities who prefer to promote themselves on social media rather than go through news media, filmmakers are increasingly willing to surrender their editorial independence. It is common to give subjects incentives that would be scandalous in any other news medium: paying for access, clearing quotes and clips, giving a subject’s business partners a producing credit.

• How social media broke Britain: Will Bedingfield for Wired is very good on Will Davies’ new book This is Not Normal.

• How to mis-read Jane Austen: Louis Menand for The New Yorker is sceptical but revealing about the political sub-text of Austen’s novels.

• The rings of Sebald: an extract via The Paris Review about W.G. Sebald’s 1995 ‘novel’ The Rings of Saturn from Daniel Mendelsohn’s Three Rings: A Tale of Exile, Narrative, and Fate.

• The longform patriarchs, and their accomplices: ‘Beyond the white male canon: Bernardine Evaristo’s New Statesman / Goldsmiths Prize Lecture offers a manifesto for the creation of a new, inclusive literary landscape.’

• Even when it’s a big fat lie: Alex Abramovich’s acute analysis of Ken Burns’s Country Music, recently on BBC Four, is pretty much worth the price of a year’s sub to LRB alone.

• ‘The story I’m telling’: an interview with Archie Shepp: a wonderful, developing exchange about music and race and more between the famed saxophonist and his son, Accra Shepp – and it led me to this, from 2001: