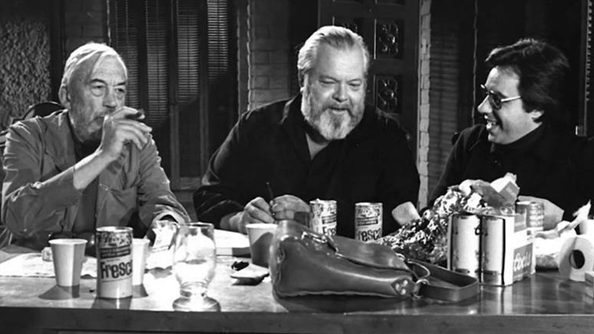 A slightly fuller list of links (and a perhaps moderately more considered one) after last week’s tentative return to this format, with a clutch of articles that I have found fascinating and enriching. Many thanks to all those who alerted me to these, on Twitter and elsewhere. (But I still can’t work out how to embed videos in the current iteration of WordPress, despite having done so many times in the past.)

• “We cannot live without Ford” – an interview with Tag Gallagher: a terrific exchange between the biographer and critic and Jake Rutkowski at FilmInt., which takes off from Gallagher’s re-working as a digital publication of his great study of the great director – John Ford, Himself and his Movies, available for Kindle here for (currently) just £4.69.

• Fred Wiseman – the art of documentary no. 1: Lola Peploe talks with the legendary filmmaker for The Paris Review…

• Alfonso Cuaron on the woman who Inspired Roma, making Harry Potter, and what he learned from his worst movie: … and in another really good interview Rebecca Keegan speaks with the Mexican auteur.

running commentary about high and low culture as defined in the 1970s, the last American decade when reading wasn’t considered an “elitist” activity. It’s expressed not just through the content of the characters’ conversations, but the rhythm of their lines. The Deuce weaves in earnest references to poetry and novels, plays and musicals, Italian and French cinema, Sigmund Freud and Bruno Bettelheim, then deflates them with a joke — the dialogue writer’s equivalent of Harvey warning Candy not to cut away from the sex too much.

• ‘It was us against those guys’ – the women who transformed Rolling Stone in the mid-70s: fascinating piece by Jessica Hopper about the (slowly) changing culture of the bible of rock’n’roll 40 years ago.

• The rage and tenderness of David Wojnarowicz’s art: Christine Smallwood for The New York Times magazine on the late artist and AIDS activist, whose work is the focus of a Whitney retrospective.

• The life and art of Wolgang Tillmans: Emily Witt profiles the photographer for The New Yorker.

• It’s time for the press to stop complaining—and to start fighting back: a powerful piece for The Atlantic by Chuck Todd about Richard Nixon, Roger Ailes and ‘the campaign to destroy the legitimacy of the American news media.’

• The battle between two elites – the haves and have-yachts: Simon Kuper for FT Magazine riffs interestingly on an important recent paper by economist Thomas Piketty, ‘Brahmin Left vs Merchant Right: Rising Inequality & the Changing Structure of Political Conflict (Evidence from France, Britain and the US, 1948-2017)’ (link to .pdf).

• How feelings took over the world: in a compelling extract from his new book via the Guardian Will Davies asks why feeling might have become a crucially important navigational aid in the 21st century.