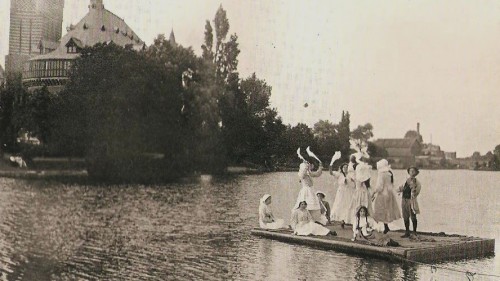 It’s our boy Ben’s 21st birthday today, and we have had an excellent party in Whitstable. This morning’s links have now been added to, with – as before – apologies for not properly crediting those who highlighted for me many of the below.

• Hitch’s ‘favourite stooge’: Philip French in the TLS on a life of scriptwriter Charles Bennett.

• The Big Chill – these are your parents: writer and filmmaker Lena Dunham at Criterion on the people in Lawrence Kasdan’s 1983 movie.

• Heinz Emigholz – building in time: from Sight & Sound, Aaron Cutler on film, photography, modernism and architecture, as seen by the German filmmaker.

• The Tate affair – then and now: thoughts on the 1950s and now from Rosalind Mckever at Apollo.

• Museum under fire for selling its art: the problems of the Delaware Art Museum, reported by Deborah Solomon for The New York Times.

• The swimming pool, symbol of Southern California, takes a dip: an engaging short article by Christopher Hawthorne for the Los Angeles Times.

• A raised voice: Claudia Roth Pierpoint on Nina Simone, from The New Yorker.

• A message from the Amazon books team: really interesting, and an important issue.

• Penguin’s new cover for Charlie and the Chocolate Factory – securing the image, securing the female child: Jessica Sage posts on the blog for the Feminist & Women’s Studies Association.

• Photographer Garry Winogrand captured America as it split wide open: Jerry Saltz for New York Magazine on a Met show that I would dearly love to see.

• The Nether: Holger Syme contributes to the debate.

• Clickhole or die – the fight over ‘sponsored content’ is 150 years old: Matt Novak at Paleofuture.

• Shining a light into the BBC radio archives: ‘How to process very large archives cheaply, quickly and at scale.

• The hi-tech mess of higher education: a piece for The New York Review of Books by David Bromwich prompted by the documentary Ivory Tower.

• Daddy, what did YOU do in the Great War centenary?: a very useful round-up of activities from Luke McKernan.

• Stratford, the Shakespeare revival and World War 1: a lovely post by Sylvia Morris at The Shakespeare blog, which is where the detail above of an image of Morris dancing on the Avon comes from.

• Academics fear for Warburg Institute’s London library, saved from the Nazis: this is important, as Maev Kennedy reports for the Guardian.

• A pound here, a pound there: David Runciman on gambling, from the London Review of Books.

• The return of coach Lasso: NBC’s new promotional spot with Jason Sudeikis for their Premiership coverage – silly, but very funny: