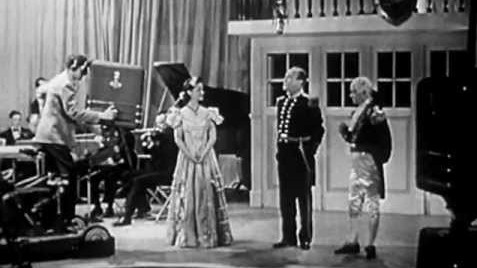 Picking up the theme from Monday’s post, here’s another wonderful glimpse of early television, albeit this time in the United States. The embedded film below comes courtesy of the great and glorious Prelinger Archives which offers online some 6,000 educational and corporate films, and home movies. These are entirely free to access and to re-use, and collectively are a wonderful resource. Some sense of what is on offer and the background to the collection is in this post by Colin Marshall at Open Culture. For today, here’s the 12-minute Tomorrow Television (or it might be Television Tomorrow), made for American servicemen and women in, probably, early 1945.

There are exceptional sequences here of the production of television, both in studios (above) and as outside broadcasts, towards the end of the war in the United States. It is also very interesting as a vision of how the television industry will create thousands of jobs for the soldiers and airmen who are about to be de-mobbed. In addition, it is fascinating for its glimpse of Gilbert Seldes, who at the time was director of television for CBS. Seldes is a remarkable character who was a writer and critic, a playwright, and later the founding Dean of the Annenberg School for Communication at the University of Pennsylvania. Take a look.