The city and sex 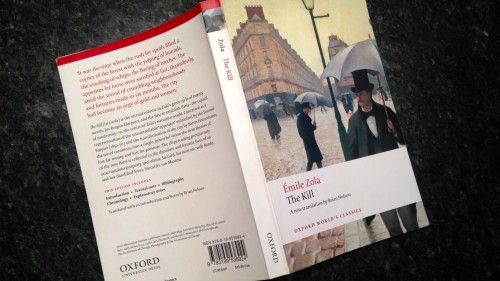 I am reading a book that drips sex. Émile Zola’s The Kill, in Brian Nelson’s thrillingly good Oxford World’s Classics translation, is one of the most sensuous, sexy books that I think I’ve ever read. This may, I recognise, say more about my sheltered upbringing than the qualities of Zola’s 1872 novel, but I like to think not.

The Kill is the second of the French novelist’s great Rougon-Macquart cycle, but it’s not nearly as well-known as others in twenty-volume series, such as Nana (1880) or Germinal (1885). Given its compelling voluptuousness, this comparative obscurity is perhaps a surprise, although it is connected, I suspect, to the fact that Nelson’s recent translation into English is the first since 1895.

The scene is laid in the Paris of the Second Empire, mostly in the early 1860s, and the story relates the incestuous passion of the thirty-year-old society beauty Renée for her stepson Maxime. The third central character is the avaricious and unseeing Saccard, Renée’s husband and Maxime’s father, and the fourth is the urban environment undergoing the upheavals of Baron Haussmann’s rebuilding. It’s a book about capital and modernity, about the city and sex. And having started reading it via a Kindle app on my iPad, and finding that deeply unsatisfying, I am now devouring the handsome paperback that you see above. Which is tactile, elegant, hard-wearing, responsive, versatile and, in its own quiet way, sort of sexy.

I read a lot of things on my iPad. I read my subscription to The New Yorker. I read scripts and I read the Guardian website. I read academic books about film history and adapting Shakespeare for the screen. But I have definitively decided that the particular pleasure of reading a great classic novel is not to be had from an unyielding glass screen. I need the thoughts of Henry James and George Eliot and indeed Émile Zola to be laid out in distinctive type on particular paper. I want the dialogue and especially the descriptions at which Zola excels to be in the same place on a page when I return to them. And I have to be able to touch the words. I want them to be real.

It is important to me as I consume a novel that I can bend back – but not break – the spine. I delight at the way in which my reading just lightly soils the pages, so that I constantly have the sense of my progress through a volume. And I anticipate with pleasure that I will keep this volume on my shelves, where it will continue to carry the traces and the marks and the memories of my encounter with it. The reading of a great book is, and I think (or trust) always will be, supremely physical.