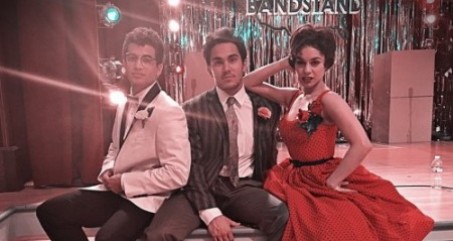 Perhaps the best, and certainly the most exciting, television I’ve seen since the start of the year was Grease: Live! screened last week on ITV2. This FOX TV show, which had been truly live in the States the previous Sunday, was reprised here “as live”, and even as a recording it made close-to-perfect television. Frustratingly, it does not appear to be available via ITV’s catch-up service, but in the States at least there’s to be a DVD in March. Last week, too, a host of clips seemed to be legally available through Youtube, but these have now been geo-blocked, so you have to go to round-ups like this to get a sense of the show.

Wikipedia has a good round-up page, with background, cast details, musical numbers and ratings, and below I have posted some further links to production information (the total for this one-off was $16 million!), reviews and reactions. I am a sucker for classic musicals (and if there was any doubt that Grease deserved that appellation, last week blew away any doubts), and so I simply and straightforwardly enjoyed the show. But there was (much) more to it than simply fun.

With Grease: Live! FOX TV piggy-backed on NBC’s modest success in mounting three live syudio musicals over the past three holiday seasons: The Sound of Music Live! (2013), Peter Pan Live! (2014) and The Wiz Live! (2015), with Hairspray to come later this year. Their lead was followed this Christmas by ITV with their engaging but oh-so-sedate The Sound of Music Live. But as the Guardian‘s live blog of the FOX broadcast pointed out, Grease: Live! is a whole different ball-game. It has energy and panache and style and energy and excitement and ambition and a whiff of danger (can they really do yet longer and even-more-amazing Steadicam moves?) and, well, did I mention energy?

Questions were asked of some of the performances in Grease: Live! but for me its undoubted achievement was the combination of immaculate choreography and immaculately choreographed camera moves. The cameras swooped and swirled and spun through the sprawling scenes – shot across two sound-stages – with skills that would have been astonishing in a conventional recording. To see them done live across three hours was breath-taking. Sure, there were plenty of ad breaks and a number of interpolated “here’s how we’re doing the show right here” meta-moments, but, pace Twitter fans, these only added to my sense of a unique television occasion. In Grease: Live! television seemed to achieve a particularly pure form of performance.

• The four most impressive things about Grease: Live!: a review by Robert Peterpaul for the Huffington Post.

• The 15 greasiest things about Fox’s Grease: Live: Lily Sparks at TV.com has the gifs.

• Grease: Live! makes the best case yet for the TV musical: Sophie Gilbert responds for The Atlantic.

• For better or for worse, Grease: Live! revolutionizes the live TV musical: Caroline Seide for The A.V. Club.

• Behind the scenes of Grease: Live: Take a peek inside the control room: an article by Lindsay Kimble for People has an amazing clip that the show’s associate director Carrie Havel posted to Facebook of her “calling” the show inside the scanner – to date this has had more than a million and a quarter views.