The only blonde in the world 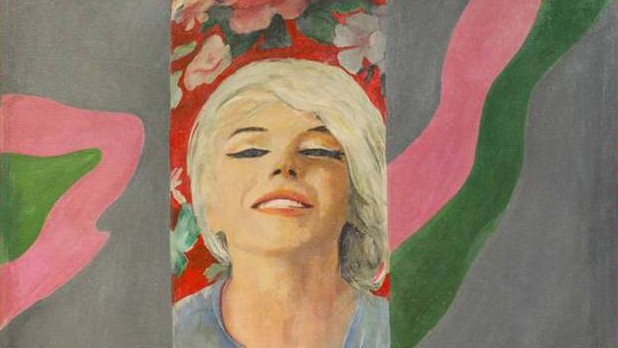 To the always delightful Pallant House Gallery in Chichester, to catch the exhibition Pauline Boty: Pop Artist and Woman before it closes on Sunday. This is a show from Wave in Wolverhampton and it travels on, slightly strangely, to the also delightful Muzeum Szutki in Lodz, Poland, which owns Boty’s My Colouring Book, 1963, one of the paintings on show. Pauline Boty was an artist and sometime actress who before her death at the age of 28 in 1966 painted works now seen as key to the story of British Pop art. But for many years she was all-but forgotten, and her rediscovery is an essential part of the story that co-curator Sue Tate tells in the valuable catalogue. The show is displayed in just two small rooms and it’s most definitely worth the trip, but what I want to do here is to collect together a handful of the traces and writings about Boty so that you can undertake your own journey through her work and life. Essential exhibit no 1. is Pop Goes the Easel, directed by Ken Russell in 1962 for BBC Television’s Monitor:

Pauline Boty is one of four young artists in Pop Goes the Easel – the others are Peter Blake, Derek Boshier and Peter Phillips – all associated with the Royal College of Art, documented at the formative moment of British Pop. The film is an exhilarating, fantastical, beautiful and radical snap-shot of the art world, which of course is made almost desperately poignant by a knowledge of what would happen to Boty four years later. First, she discovered that was pregnant (she had married the agent Clive Goodwin after a whirlwind romance) and then she was diagnosed with cancer. According to Sue Tate in the catalogue, ‘Boty was offered an abortion so that she could have radiation therapy, but she turned it down and with it the possibility of treatment and cure.’

Boty Goodwin, named after her parents, was born just five month’s before Pauline’s death on 1 July 1966. You can find online a remarkable Independent article by Sabine Durrant from 1993, The darling of her generation…, which fills in more of the story, an includes a note that Boty Goodwin ‘now studies art in California [… and…] refuses to talk about her mother’.

By this point Boty’s life had been transformed by the death of her father, Clive, who himself had died of a cerebral hemorrhage in Los Angeles. There with the writer Trevor Griffiths to discuss Warren Beatty’s film Reds, Goodwin collapsed in a hotel but was thrown into a cell by local police who assumed he was drunk. There was a significant settlement for Boty and a lifestyle that included the use of heroin, from which she died of an overdose in 1995, when she was just 29.

1993 was the year of David Alan Mellor’s great revisionist exhibition The Sixties at the Barbican Art Gallery. As Sabine Durrant records, Mellor searched out Pauline Boty’s work and initiated its critical revealuation. Since then there have been shows in commercial galleries and now this first retrospective by a publicly-funded museum. Background to this can be found in Robin Stummer’s Observer article, Mystery of missing art of Pauline Boty, and Adrian Hamilton’s piece for the Independent, Pauline Boty: the marginalised artist of British pop is enjoying a revival.

In DREAM ON, a wonderfully allusive post on October 2011 on his BBC blog (I still find this extraordinary) The Medium and the Message, Adam Curtis sets the Pauline Boty-Clive Goodwin story in the broader context of the radical politics of the 1960s, and he includes a clip from Ken Russell’s film Bela Bartok, 1964, in which Boty takes the part of a prostitute. The extract is both rather wonderfully sexy and, as Curtis points out, much indebted to he films of Jean-Luc Godard and, perhaps also, Ingmar Bergman. Remarkably, the scene also includes a glimpse of Boty’s painting Colour Her Gone (also the header image here), bought by Wolverhampton Art Gallery for £20,000 in 2012.

Adam Curtis draws attention to another interesting intertextual detail about Pauline Boty, Clive Goodwin and the cultural world of the late 1960s and 1970s:

In 1973 one of [Goodwin’s] most famous clients, a playwright called Trevor Griffiths wrote a play called The Partythat tore apart the revolutionary dreams of the previous ten years. It caused a sensation when it was put on at the National Theatre.

It is set one night in a flat in 1968 – the set directions are clear that it was modelled on the sort of flat that Clive Goodwin and Pauline Boty had back then – “SW7 somewhere. Big, white, sunny, rather cool. Hockney and Botys“.

Curtis includes a clip from the 1988 BBC Scotland television production of The Party, which I’ve never seen but which looks remarkable. (I remain thrilled that I did see the original 1973 National Theatre production with Laurence Olivier.)

There is a further document that demands to be noted here, which is Fisun Guner’s review for the arts desk in December of the Pallant House Gallery showing of Pauline Boty: Pop Artist and Woman. Guner is very positive about the paintings but close to apoplectic about the curation:

This exhibition makes me very sad. And not just because the subject of this long overdue survey died at the age of 28, and so left behind a body of work that stretches to only two very small galleries in the current exhibition, but because it does Pauline Boty, Pop artist and a contemporary of Peter Blake, a disservice… there’s everything wrong with this exhibition except the works.

The core of Guner’s argument against the ‘curatorial blunderbuss’ applied to the show by Sue Tate is this:

…on and on and on do we read of [Boty’s]  “gendered” perspective – an adjective either used on almost every other label or else inferred throughout the exhibition, so that the paintings simply aren’t allowed to be or to breath as works of art in their own right but only as a reductive schema to the fact of Boty’s sex. I will go further and say that I find this not only grating but dehumanising – is there no other “perspective” from which Boty might have viewed the world? One is therefore forced to ask: is it really progress to talk about women being historically sidelined as artists and then to go on to straitjacket them by other means, according to another agenda, by prescriptively interpreting their work in such a reductive manner?

There’s no doubt that the labels are prescriptive, and while I think Guner’s position is over-stated for journalistic effect I have a good deal of sympathy for it. Certainly it is refreshing to read a piece of criticism that cares deeply about the art and ideas around the art with which it is engaged.

In response, Sue Tate posted an impassioned reply, which is done something of a disservice by being squeezed into the format of a blog comment. This is an extract:

Günar suggests that I have imposed a feminist reading on Boty, yet Boty’s overt feminist intent is fully evidenced in witty and vitriolic monologues that she delivered on Public Ear – a trendy radio programme (quoted extensively in the book that accompanies the show) and in a long interview with Nell Dunn. She lams into women’s magazine stories that ‘sell’ marriage as ‘the golden climax of life’, attacks smug establishment men, equates the social suppression of women to their sexual repression and extols the revolutionary potential of young girls in their bold provocative fashions breaking up the sexually repressed old order ‘All over the country [they] are starting, shouting, shaking and if they terrify you they mean to and they are beginning to impress the world’. To ignore the clear intention of the artist would be to do her an injustice.

It’s a fascinating exchange, and one in which I don’t feel that Sue Tate responds to Fisun Guner’s charge of the show’s curation and presentation over-determining the “meaning” of the paintings. But the paintings can still unquestionably speak for themselves, as they do in what is a compelling and provocative show.