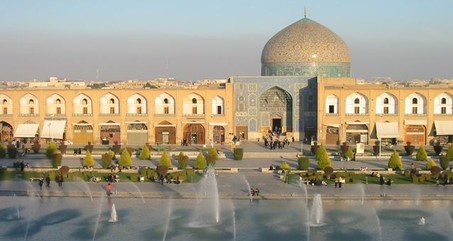 A time there was when I used to post here regularly, including on each Sunday a host of links. In recent months I have fallen out of the habit. You’ve been so busy with other things, I tell myself. You’ve been writing in so many other contexts, I use as an excuse. But I know that @Illuminations has taken much of my focus, and my recommendations tend to go there rather than here. At the same time I like the relative (with much stress) permanence of a blog, when compared with the total transience of Twitter. So I am going to try a different tack, and to post frequently – and every day if I can – just a trio of things that have engaged me or interested or infuriated me. Sometimes they will be linked, oftentimes they won’t. Make of them what you will.

• Shakespeare in Teheran: Stephen Greenblatt gives a keynote, muses on the potential for “at-one-ment” offered by the Bard’s writings, and visits the truly glorious Sheik Lotfollah mosque in Isfahan (which I was privileged to see in 2004; it’s my image above); take a look also at the follow-up exchange here.

• Mad Men – Gender and Historiography: the Mad Men syllabus, including viewings and readings, by Anne Helen Petersen (from when she was an academic).