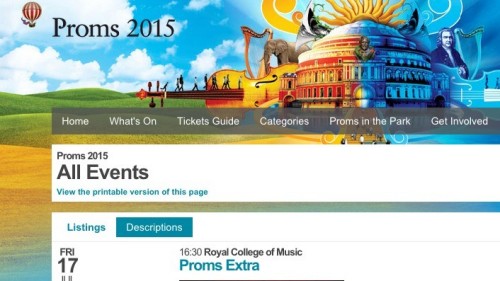 Long ago and far away I was a ten-year-old trainspotter. I would stand on the station footbridge at Whitstable noting down the numbers of the recently introduced electric trains that passed beneath me. Then I would run home to underline with scrupulous care the collected digits in the lists published by Ian Allan in small books of shiny paper. A half century on I can recognise something of the same imperative behind the late summer project that I have taken on. For I am listening to, and mentally ticking off on a virtual list, every single note of BBC Proms 2015. That is, every concert at the Royal Albert Hall, every Cadogan Hall presentation, and every Extra Lates as well. Plus some of the interval talks, although one or two have felt a bit esoteric even for me.

I am sure there are people who manage to do this in person (although I think there’s a clash between the hall and Proms in the Park on Saturday), but I have had neither the leisure nor the loot to queue up in Kensington every day for two months. Instead, I have been hearing them courtesy of the truly wonderful BBC iPlayer Radio App.

Released just in time for this year’s Proms, the App allows the user to download pretty much everything broadcast by the BBC radio networks and to listen offline for up to 30 days. Which is exactly what I’ve been doing with the Proms. Having just worked my way through all seven Sibelius symphonies I am about halfway, and over three weeks behind the real world, but since this is the last week of concerts and I’ll have another month after Saturday to get to the Last Night I am confident that I can do this.

It takes a few minutes to familiarise yourself with the functionality of the app, which is available for free for both Apple and Android. But once you have done it offers brilliantly intuitive functionality. I can rack up the broadcasts I want to listen to, pause them as I want, replay if needed, and then dispose of them when I’m done. Plus, all of the download operations are integrated with the live elements as well. Like many other aspects of the BBC, it is truly worth the price of the licence fee alone.

Just a couple of minor quibbles, however. On my iPad when I have finished listening to one download and I want to get to the next, I can access the download menu but as soon as I activate Play the app crashes and I have to start over. And as well as fixing that bug, in the next iteration could we have the ability to re-order the items in the downloads list, please?

With reasonable headphones, my iPad has given me exceptional sound quality, and I have listened to a good deal of Prokofiev and Sibelius, to neither of which I’d paid much attention before. I have encountered elements of swing and grime (not sure whether to capitalise either, Ed?). I have hugely enjoyed Fiddler on the Roof and The Abduction from the Seraglio, I have bathed in Boulez and Beethoven, and I have been transported by late-night Bach. Especially the two sensational concerts, Proms 19 and 21, of the complete Sonatas and Partitas for the solo violin played by Alina Imbragimova. The audio of these has passed the 30-day deadline on iPlayer but the BBC Four broadcasts are still online (start here) with no obvious indication that they will disappear anytime soon.

What being a completist of this kind does is bring back that element of educational serendipity that television schedules once offered – and which has disappeared in these days of ‘full drops’, instant access and endless choice. The idea always used to be that you might tune in to BBC1 to watch Steptoe and Son and you would then move on to Monitor before you had the chance to change channels and you would soon find yourself entranced by an item on musique concrète.

I am not sure that it ever worked quite like that, but there is no doubt that the train-spotter in me has come to contemporary commissions by Gary Carpenter, Shiori Usui and Joanna Lee, none of whom I’d never heard before, as well as glorious new music from slightly more familiar names like Hugh Wood and Tansy Davies. The piano concertos by Prokofiev were a revelation but I fear my resistances to both Brahms and Mahler (and there’s quite a bit more of both to come) remain firmly in place. Nonetheless, for that ten year old that I know is somewhere not so deep inside, it is just as satisfying to tick off ‘Triumphlied’ and Mahler 4 as it is Messiaen’s Turangalila Symphony and Shostakovich’s unfinished Orango.