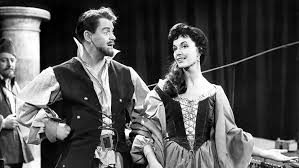 To BFI Southbank on Monday for a triple bill of television dramas by women playwrights: The Tamer Tamed, 1956, by Elaine Morgan (above); Still Waters, 1972, by Julia Jones; and A Kind of Marriage, 1976, by Buchi Emecheta. The programme was part of the hugely valuable Drama She Wrote season curated by the BFI’s Dick Fiddy and Dr Billy Smart, and Billy writes about the three plays on the Forgotten Television Drama blog. It’s worth noting too that there are two further offerings in the season on Saturday and Monday, details of which are below.

I have to admit that I found all three of Monday’s dramas disappointing. At least I judged them so when measured against conventional criteria, whether of their own time or, especially, of today. Each in its way is – or seemed so on Monday, when projected on NFT2’s big screen – clunky, over-written and internally inconsistent both in tone and in the quality of the performances. But at the same time I found each one fascinating – and strange. Indeed, fascinating precisely because of the surprising strangeness. And that brought home yet again how little we know of the vast continent that is the history of television drama, how little of it has been mapped and documented, and how many wonders and weirdnesses there are still to be discovered. TV incognita, indeed.

Research projects like the estimable Forgotten Television Drama are vitally important to exploring the history of small screen drama. Ditto BFI Southbank seasons, and the miracle that is the DVD release schedule from Network, which has made much of ITV’s drama widely available. Academic researchers like Billy Smart, Lez Cooke, Amanda Wrigley and others burrow away to bring historical drama to light, to examine and assess and understand it. But if we compare what is known and has been written about the history of British film, the parallel – and frequently intimately intertwined – history of British television drama needs still to be characterised as, in Julian Petley’s 1986 description of British cinema, ‘the lost continent’.

For Petley, who was writing in All Our Yesterdays: 90 Years of British Cinema edited by Charles Barr, and for other commentators including Andrew Higson, a true understanding of the nation’s film tradition was constrained not only by a lack of deep knowledge and extensive engagement with the history, but also by an allegiance to a dominant realist aesthetic. As Charles Barr wrote (in Screen in 1972), ‘the preference for a certain kind of realistic surface, or an “everyday” verisimilitude, has been a recurrent factor in English film criticism and has inhibited response to a wider range of films with an allegorical or poetic dimension.’

Much the same preference pertains in the ways in which both the history of television drama is constructed and in which contemporary small screen drama is discussed. There are valorised exceptions, of course, including Dennis Potter’s Pennies from Heaven, 1978, and The Singing Detective, 1986, but many of the acknowledged highpoints of television drama operate with an everyday verisimilitude, most obviously in soaps like Coronation Street, from 1960, and EastEnders, from 1985, but also in The Forsyte Saga, 1967, Brideshead Revisited, 1981, Downton Abbey, 2010-17, or even, so we imagine, The Crown,from 2016. Dramas that skilfully manipulate the parameters of particular genres, most recently Bodyguard, are criticised for being ‘unbelievable’, while work that consciously resists realism, or at least plays with and confounds its conventions, such as Hugo Blick’s current Black Earth Rising, is met with critical unease and bafflement.

Of the three plays shown on Monday, Buchi Emecheta’s was perhaps the most conventionally ‘realist’, at least in aspiration. With three short acts crammed into a half-hour this tale of a Nigerian woman asserting her independence against tradition and her husband’s seemingly modern ideas, was set in a bedroom and in a mud-walled village meeting hut. Emecheta (1944-2017) was a Nigerian-born British writer best known for her novels, and A Kind of Marriage was a rare television drama from her pen. (She also wrote a story for Granada’s daytime series Crown Court, 1972-1984, which BFI Southbank will show next year.)

The penny-plain sparseness of the overlit studio setting, and the distance from conventional expectations of some of the performances of the all-black cast, headed by Jumoke Debayo and Willie Jonah, worked against the attempts of what (on the evidence only of their names) to have been an all-white production team to achieve par-for-the-course small-screen realism.

More deliberately eccentric, perhaps, was The Tamer Tamed, which purported to be a sequel to Shakespeare’s The Taming of the Shrew – and which semeed, apart from its premise, to have nothing to do with John Fletcher’s early modern drama of the same title (or, alternatively, The Woman’s Prize). This 1956 recording is precious in part as it’s one of the earliest television dramas to survive, and it is a rich resource for studying how limited and constrained were the capabilities of the television studio in the mid-1950s. Establishing shots are rare, as are camera moves, the cutting rhythms are much slower than we are used to today, and many exchanges between characters take place with the actors bundled together within the cameras’ limited angles of view.

What made The Tamer Tamed distinctive and, indeed, strange, was the drama being played in a meta-theatrical frame, which established at the start (much as Shakespeare’s original does) the action as being presented on a stage, and then frequently cut to stage (or studio) managers, seemingly dressed in modern clothes, running a prompt book, providing live Foley effects (such as coconut shells simulating horse’s hooves), and playing in music cues. The device seemed not to be internally motivated or explained, despite its prominence, and this – combined with Morgan’s eccentric language drawing together cod Elizabethan verse, quotations from Shakespeare and the demotic of the 1950s – rendered the piece most definitely strange.

Strangest of all, however, was Julia Jones’ Still Waters, a 50-minute Play for Today film directed by the great James MacTaggart and shot entirely on location in a Welsh river valley by Brian Tufano. (For more on the playwright, see Lez Cooke’s excellent essay here.) The characters are an elderly former commercial traveller, a young child in Wellingtons, a loved-up hippie couple in matching outfits, and a middle-aged couple – she hopeful but wistful, he angry – on an outing. They encounter each other again and again in various combinations on the banks of the river and beneath a beautiful waterfall. They exchange confidences, eat sausages and, to a degree, shed their clothes. In conventional terms, nothing happens, and much of the film consists of wordless sequences of the landscape accompanied by Herbert Chappell’s over-insistent score.

The lack of action and narrative is strange enough, but then there is also the role that the landscape plays throughout a film that is far from realist in its intentions. There is a strong sense that the genius loci is manipulating and toying with the figures, placing them together and pulling them apart, responding to the regrets and the desires and, at least in relation to the young lovers, the implied eroticism of their lives. I found the film frustrating – and I can’t imagine what the audience 45 years ago made of it – but at the same oddly compelling, not least because of the echoes, whether conscious or not, of the rich tradition of British film in which the powerful poetry of landscape is central, including A Canterbury Tale, 1944, The Go-Between, 1971. and Blood on Satan’s Claw, 1971. (Is it only coincidental that two of my three examples are almost contemporaneous with Still Waters?)

Still Waters is, I think, a real – if complex, compromised and most definitely only modest – discovery in the lost continent of British TV drama. But having watched it, and been alternately bored and immensely engaged by it, my sense has only been enhanced of just how unknown is the world of TV incognita.