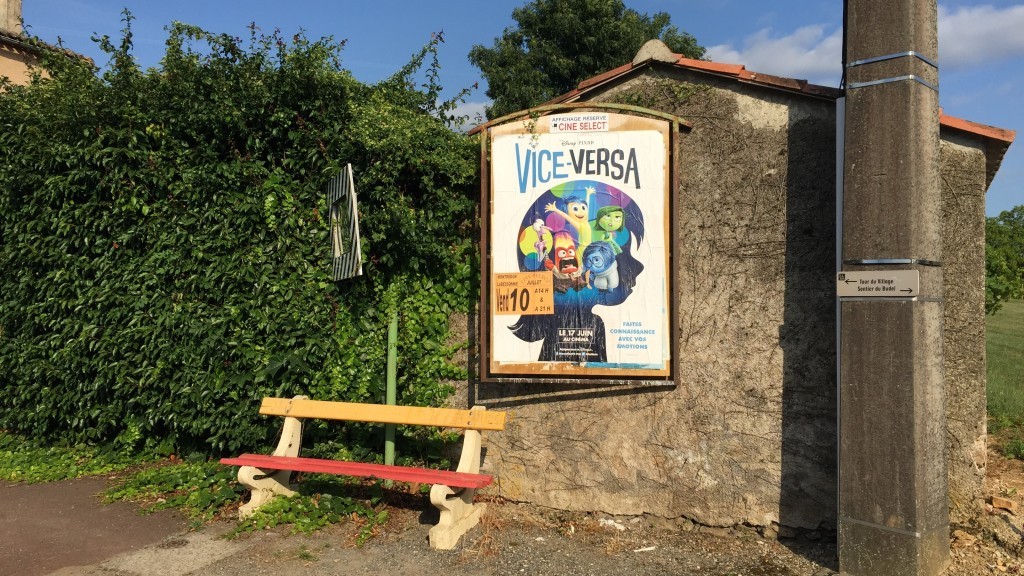 We have been on holiday in France, staying in an ancient manor house on the outskirts of the village of Montredon-Labessonié. Tucked away in the countryside between Albi and Castres, Montredon-Labessonié has a church, a bar and a recently opened pizza restaurant, a post office and two small supermarkets. Incongrously, there is a zoo just outside the village but the human population of the immediate area cannot be more than few hundred. Yet the village boasts a very fine 126-seat modern cinema where on Friday evening we watched the new Pixar film Inside Out (Vice-Versa in French, and delightful by the way) which was sparklingly and immaculately projected on a big screen in 3D and 5.1 audio. Three times a week on summer evenings (less frequently in winter), and on certain afternoons also, at Cine Select Maurice Boyez projects films to the kids of the area, to the region’s cinema-lovers and to the occasional tourist, Just as he has since 1957.

Maurice was 14 when he began assisting the local priest with film screenings of 9.5mm prints for pupils after catechism back in the late 1950s. He says that he was promised that someone else would help out with the projection but somehow they never did, although today there are more than a dozen volunteers who put up posters (see above), sell tickets, hand out the 3D glasses and come round with ice creams in wicker baskets. The cinema’s website has a helpful history which explains that it was Curé Auriol who began screenings in the 1950s in a building that was then part of the school. Towards the end of the decade the showings were organised by a ciné-club which in 1964 started to book films just like a commercial cinema.

A windfall in receipts from the D-Day epic The Longest Day in 1966 made possible the replacement of wooden chairs (constructed by friends of the cinema) with more comfortable seating. In 1974 the cinema was upgraded to 35mm and then in 2012 state-of-the-art digital projection with 3D capability was installed. Today, an adult ticket will cost you just €6, and there is a loyalty card system which means that every sixth film is free. The seats are comfortable, the legroom is plentiful, and neither ads nor trailers are screened before the feature attraction.

For 58 years Maurice has been projecting films, and judging from his courtesy and enthusiasm when he welcomed us to the projection box, his belief in the value and importance of cinema is as strong now as it was just as the nouvelle vague was breaking over French cinema. Last week he showed one of the critical successes of this year’s Cannes festival, Le Loi du marché, and next week his programming promises Fast and Furious 7. How wonderful that this cinema can embrace both a downbeat slice of contemporary social realism and a Hollywood actioner. And how glorious – and how unthinkable apart from in France – that in this out-of-the-way rural commune there is a temple to film like Cine Select and, for 58 years now, a faithful servant of celluloid (albeit of the digital kind) like M. Bovez.

Vive le cinéma — and many, many felicitations, Maurice.