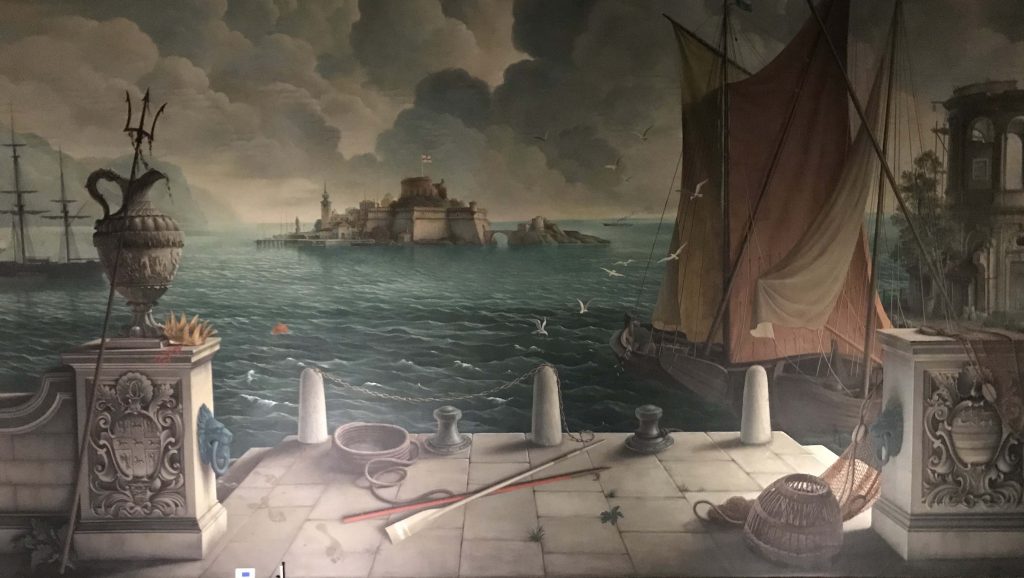 John Wyver writes: I’m never entirely certain if it’s interesting to post here about artworks or architecture that I’ve encountered, or about films and television I’ve watched, or books that I’ve read. Indeed, after well over a decade, on and off, writing this blog, I’m still uncertain about quite why I do it. Or what readers get from it. Meanwhile, from time to time, and far from as regularly as I would like, I carry on, as with this post about a visit today to Plas Newydd. Spectacularly sited looking out over the Menai Strat, this house is the ancestral home of the Marquess of Anglesey, and is now in the care of the National Trust. Installed here is Rex Whistler’s spectacular modern masterpiece, ‘Capriccio of a Mediterranean Seaport with British and Italian Buildings, the Mountains of Snowdonia, and a Self-portrait wielding a Broom’ (1936-37).

Rex Whistler is a fascinating figurative painter of the interwar years perhaps best-known for the mural decorations of the restaurant at Tate Britain. These were completed in 1927 when he was just 22, and the 50-foot fantasy at Plas Newydd dates from a decade later. He died at the age of 39 during the post-D Day campaign in Normandy. As the NT’s online catalogue entry explains, the ‘Capriccio…’ was commissioned by Lord Anglesey and was, in part at least, a response to the views of waters that could be seen from the room and to the Welsh mountains beyond.

The outline of the composition was sketched on the wall but much of the painting of its outsize canvas was done in a theatre workshop in Lambeth:

Much of the composition is purely imaginary, but there are numerous architectural and personal references. Of the former, the steeple of St Martin-in-the-Fields, Trajan’s Column, the Round Tower at Windsor and the Roman church of S.Nome di Maria can be seen, the Italian buildings perhaps recalled from Whistler’s time at the British School in Rome….

Almost by way of a signature, Whistler added in the arcade at the [left-hand] end the figure of a young man sweeping up rose petals (a reference to his love for Catherine Paget) – this is a self-portrait, the last one before his death in action only a few years later.

The Esoteric Curiosa blog has a fascinating post about the relationship between the artist and Lady Caroline Paget, who was the beautiful daughter of the house. This also features a group of glorious portraits of her by Whistler. She was a notable socialite and a member of a set of bright young things that featured other artists and aristos.

I first learned about Whistler’s remarkable painting – which really is spectacular in situ – from the conclusion of Jane Stevenson‘s richly interesting but at the same time frustrating study Baroque Between the Wars: Alternative Style in the Arts, 1918-1939. (The book is full of stimulating ideas but I felt that it does not achieve a clear and coherent argument to draw together all of its strands.) Of the ‘Capriccio…’ she writes:

Like all Whistler’s best murals, the overall tonality of the Play Newydd piece is greenish-tyrquoise with soft mouse’s-back, greyish browns – colours which impose nostalgia and distance. It must have looked long ago and faraway even when it was new… One whimsical trompe l’oeil detail ties it into the room: Neptun’es trident leans casually against a balustrade, and wet footprints wander towards, adn apparently into, the room itself.

Stevenson details the influences of Claude Joseph Vernet and Claude Lorrain, and notes that the general design is based on the vista in the background of a Giulio Romano fresco.

The mural is an idealization of a world which had ended: it was conceived when war was on the horizon, and completed after Whistler had joined the army, during periods of leave. A poignantly unfinished-looking passage in the otherwise immaculate surface marks his last intervention, when he decided to paint over a ship but ran out of Chinese white, since paint was sometimes hard to get during the war. A full restoration of the surface was promised for another visit, which never took place because, shortl;y afterwards, he was killed in action.

When the painting was installed the large windows on the opposite wall opened out onto the Menai Strait, while between the openings mirrored tiles reflected back the composition. Currently, Plas Newydd is undergoing a lengthy restoration, and the National Trust has very smartly placed the processes of this work at the heart of the current displays throughout the house. A theatrical metaphor of ‘Acts’ is used to guide us through the rooms that remain open, with the Whistler as the fitting ‘Finale’. The room is dark, with only the painting brightly lit, and half a dozen chairs are placed before it (rather than the usual dining table) to encourage us to sit and view the scene before us much as if it is a play.

The National Trust has also commissioned a complex soundscape to accompany the display, and Simon Pyke’s Lost and Found plays insistently in the room. All of which – the lighting and the audio and a preliminary camera obscura that you walk through to reach the Whistler room – conjured up an insistent theatricality that worked wonderfully well for me.