Basquiat and the return of history 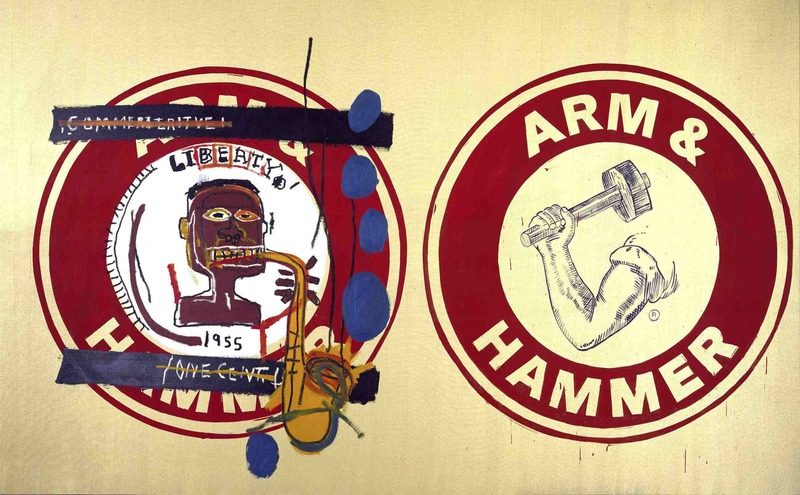 Our colleague TOM ALLEN reflects on postmodernism and history, on the ideas of Frederic Jameson and Karl Marx, and on the art of Vincent Van Gogh, Andy Warhol and Jean-Michel Basquiat.

I was recently re-reading the first chapter of Frederic Jameson’s book Postmodernism, or, The Cultural Logic of Late Capitalism. Jameson contrasts Vincent Van Gogh’s “A Pair of Shoes” (1886-87) with Andy Warhol’s “Diamond Dust Shoes” (1980) as an example of the difference between modernism and postmodernism, and what I found striking about this distinction was how we could use this definition as a way to understand the artistic relationship between Andy Warhol and Jean-Michel Basquiat. 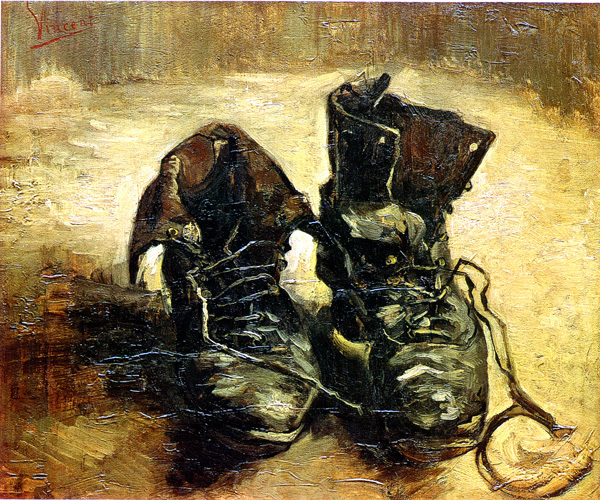 In the modernist example, Van Gogh paints a pair of peasant shoes in which Jameson states that it is possible to connect this image to history as “it [the work] requires us [the viewer] to reconstruct some initial situation out of which the finished work emerges.” (Jameson, 1991, p.58). The ‘initial situation’ according to Jameson is the world of “agricultural misery, of stark rural poverty, and the whole rudimentary human world of backbreaking peasant toil, a world reduced to its most brutal and menaced, primitive and marginalized state” (Jameson, 1991, p.58). In Van Gogh’s work, history is acknowledged and the work of art only makes sense within this frame.

However, in the postmodernist example of Warhol, history is entirely absent from the artwork. Warhol’s “Diamond Dust Shoes” presents us, not with a pair of shoes that belong to anyone and would indicate a use and life attached to them, but several pairs of brightly coloured women shoes on a black background shorn of all context. In contrast to Van Gogh, there is no ‘initial situation’ in which we can place Warhol’s shoes in order to give the painting meaning and in which we could “restore to these oddments that whole larger lived context of the dance hall or the ball, the world of jetset fashion or of glamour magazines” (Jameson, 1991, p.60). 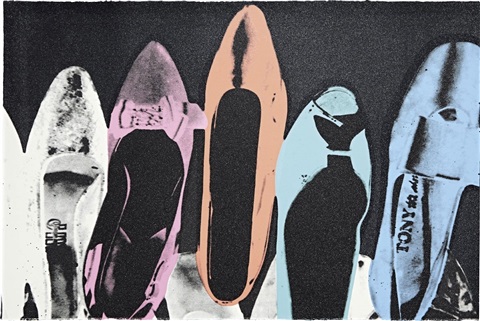 For Jameson, the key difference between high modernism and postmodernism is that postmodernism introduces “a new type of flatness or depthlessness, a new kind of superficiality in the most literal sense,” (Jameson, 1991, p.60). Warhol’s painting is a fetish in both the Freudian and Marxist sense according to Jameson, although it is only the Marxist definition that need trouble us in this instance. Marx understands a commodity as having two categories: use and exchange value. Use value is the value that a thing has in itself, for example a chair is a thing to sit on, in contrast to the exchange value which is the things value dictated in the market in relation to other commodities.

The “fetishism of the commodity” in Marx is the near religious quality a commodity takes on once it is attached an exchange value, in that the value that created the commodity (the labour) is forgotten or mystified because the exchange of a commodity is never between the producers themselves. The subjective value is in turn made objective in the act of exchange. As Marx writes, “If commodities could speak, they would say this: our use-value may interest men, but it does not belong to us as objects. What does belong to us as objects, however, is our value,” (Marx, 1990, p.176)

We can see how Jameson maps the concept of commodity fetishism onto Warhol’s painting in that Warhol replicates the fetish by closing off the ‘initial situation’ for us to give meaning to the shoes. Instead the shoes exist detached from all context (and history) except for the only value that matters; the status of the shoe as a commodity. 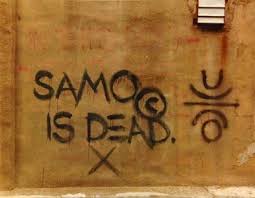 In the remainder of this blogpost I want to use Jameson’s distinction between modernism and postmodernism to see how this is replicated between Andy Warhol and his most famous protégé, Jean-Michel Basquiat. Their relationship benefited both artists: Basquiat gained from Warhol’s fame, while Warhol drew on Basquiat’s youthful and rebellious image. This is not to downplay their personal relationship in the slightest; after all, Basquiat was tremendously affected by Warhol’s death and whether or not it was directly related, Warhol’s death coincided with Basquiat’s spiral further into his heroin addiction that that would eventually kill him.

Alongside their personal and professional relationship, they shared an overlap in both style and theme of their respective art works. For example, in Basquiat’s earlier work he had created ‘SAMO’ Graffiti with Al Diaz; however once their relationship had turned sour, they wrote “SAMO is dead” around New York’s midtown. In doing so they flirted with artistic statement as corporate sloganeering in the same way Warhol had brought corporate branding into the art gallery.

In the sixth episode of Illuminations series State of the Art Basquiat says that “black people aren’t portrayed realistically or not even portrayed in modern art”. It was this attitude that is represented in Basquiat’s works such as “Untitled (History of the Black People)” (1983, above) where his deceptively naïve style references ancient Egypt, southern African-American culture, and Nubian masks to critique western art’s understanding of history and its ‘forgetfulness’ towards slavery and black people. Moreover, what struck me about Basquiat’s comment in light of re-reading Jameson is that Basquiat’s work is all too aware of history in contrast to Warhol whose work erases it. Consequently the opposition between modernism and postmodernism can be viewed between Basquiat and Warhol, with the twist that the younger artist takes the position of the ‘older’ movement and the older artist conveying the more contemporary style. 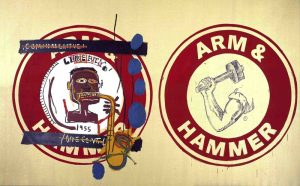 We can see this opposition within their collaborative work, using “Arm and Hammer II” (1985, above) as an example. Warhol painted two images of the Arm & Hammer logo and Basquiat then painted over the first image, depicting a coin at the heart of the logo with ‘liberty’ and ‘1955’ at the top and bottom of the coin respectively with the image of a black man playing a saxophone at its heart.

There are multiple ways the viewer can read this. A celebration of black creativity against the cooperate white establishment, in which; the literal depiction of a ‘strong arm’ becomes almost fascist in contrast. One can also read the irony of the use ‘liberty’ in the context of 1955 whereby African-Americans in the south still lived under Jim Crow. Furthermore, the fact that this is a coin brings us to the issue of commodification. The word ‘commemorative’ is written with a line going through it and Basquiat appears to be commenting on the commodification of black creativity. Specifically, how it is only valourised retrospectively, which is of course when it has started to be monetised in the white mainstream. Jazz, a genre that owes its existence to the African-American experience is born out of social and political oppression, only to be commodified and valourised years later once those political and social battles have been fought and (at least partially*) won.

If Warhol and postmodernism are marked by a superficiality that negates context, then within Warhol and Basquiat’s collaborative work, Basquiat introduces what can only be described as the return of the repressed. The return of the repressed is expressed in two ways. First, it is the ‘repressed’ of the absence of black people in western art as Basquiat himself talked about in the interview from State of the Art. Moreover, the figure that Basquiat creates of black creativity is in stark contrast to the white, strong arm corporate image that Warhol reproduces.

This leads us to the second point in which history forms part of the repressed. As Jameson illustrates, Warhol and postmodernism mystify history but this does not negate history itself. As such, Basquiat’s ‘defacement’ of Warhol’s work gives us the context of the ‘initial situation’ that Van Gogh’s work does. Rather than the back-breaking work of the peasant, Basquiat’s intervention gives us the context of racism, civil rights, and of course the history of slavery. Through this, black creativity and white prosperity is given its proper historical context of exploitation, a gesture that is entirely alien to Warhol and postmodernism at large.

You can purchase State of the Art through our website. We also offer Jean-Michel Vecchiet’s film Jean-Michel Basquiat and Andy Warhol, which is part of our Art Lives series.

*Although Jim Crow was abolished the structural oppression of African-Americans has continued in various forms. See The New Jim Crow by Michelle Alexander for a discussion of this.