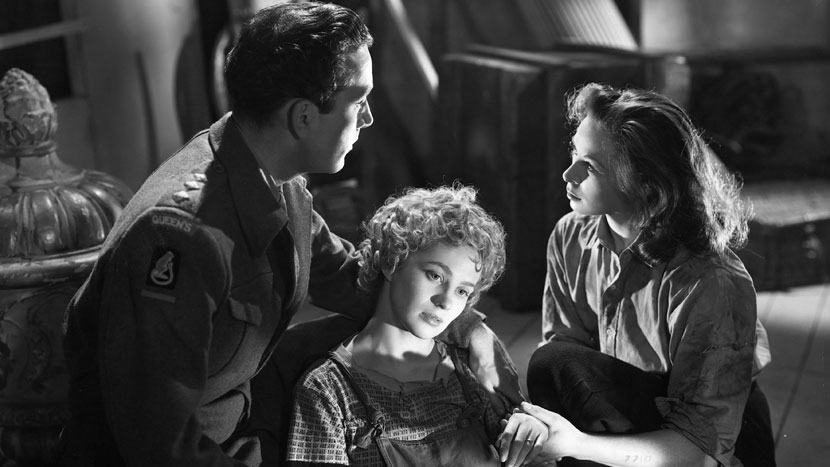 The Lost People was the first film on which the writer and director Muriel Box secured a directing credit, even if it is (something like) ‘Additional scenes directed and edited by’ and on a card with a clutch of other names. Two fine articles will give you the necessary background to her career, ‘The delights of Muriel Box’ by Neil Young for Sight & Sound, and ‘Muriel Box: Britain’s most prolific female director you’ve never heard of’ by Phil Hoad for the Guardian. Both were prompted by the full retrospective of her work at the 2018 San Sebastian Film Festival. I trust that the BFI is working on bringing this to London.

She is a richly interesting filmmaker whose work I have been discovering, thanks to wide range available on DVD, over the past months. The Happy Family (1952) is an engaging Passport to Pimlico-like comedy about a shopkeeper and his family standing up to officialdom in the shadow of the Festival of Britain site. Simon and Laura (1955) is a remarkable comedy about a reality television series, and The Truth About Women (1957) a less complex series of romantic encounters. Subway in the Sky (1959) is a prosaic thriller, but The Passionate Stranger (1957) is a truly extraordinary film of which the trailer gives a completely false impression.

In fact, this colour melodrama is framed in the complete movie by two sequences, shot in black and white and at least as long, which situate this tale as the fevered imaginings of an Italian chauffeur. Indeed, the film as a whole sends up the melodramatic intensity that is seemingly presented straightforwardly in the trailer. The chauffeur is hired by the husband (Ralph Richardson) of a romantic novelist (Margaret Leighton); he reads her latest manuscript and takes it as a fantasy that she wants to live out. The film is a brilliant game with levels of fiction and truth, and a feature from late 1950s Britain that feels entirely sui generis.

In 1948 Muriel was a successful scriptwriter, and her husband Sydney was a film executive working at Gainsborough and then Pinewood. The Lost People, which was an adaptation of a play called Cockpit, had been shot by Bernard Knowles, better-known as a cinematographer than as a director. At this stage, the film was regarded as unreleasable. According to the engaging account of Muriel Box’s life in Rachel Cooke’s chatty book Her Brilliant Career: Ten Extraordinary Women of the the Fifties, she was offered the chance to re-shoot more than half of the film and to re-edit it. Which she did, with flair, although these problems at least partly account for the lack of coherence in the finished article. The reviews were terrible but on release the film seems to have covered its costs, and that meant that Muriel Box could go on to direct The Happy Family.

The narrative is broken-backed, the characters are inconsistent, and the mid-European accents of a classy cast, including a boyish Richard Attenborough, an elegant Siobhan McKenna (whose role was entirely overseen by Muriel Box) and a gamine-like Mai Zetterling, are hit and miss. Certainly, Muriel Box demonstrates a sympathy for her female actors, but one (McKenna) flip-flops between furthering the Communist takeover of the postwar world and coming on to Dennis Price’s stiff-upper-lip and seriously repressed British officer, and the other, Marie (Zetterling), is made a martyr to the cause of European peace and reconciliation.

Mark Fisher wrote for the Guardian about Bridget Boland’s play, which was titled Cockpit, when it was revived (seemingly with great success) at Edinburgh’s Royal Lyceum in 2017:

Cockpit follows a British officer running a DP [displaced persons] camp in a provincial German theatre, where the fighting between Russians, Jews, Chetniks, communists and partisans is brought to a halt when a Polish professor suspects there’s been an outbreak of bubonic plague and insists on shutting the theatre’s doors. Not only did Michael Macowan’s original production feature a mix of European languages and actors arriving on stage from the back of the stalls, but it cast the audience in the role of refugees. Two decades before the environmental theatre movement emerged from the US, here was a show that blurred the lines between actor and audience. The critic of the Times called it a “hazardous but entirely successful experiment in applying the technique of the documentary film to the stage”.

The original production ran for just 58 performances, and lost money, but the critic and writer Dan Rebellato rediscovered it when he was writing his essential 1956 and All That: The Making of Modern British Drama. (And it was Rebellato who prompted David Grieg, who runs the Royal Lyceum, to stage the revival).

Near the start of the film the British army office Ridley looks out into the auditorium of the theatre and muses, ‘We won’t see this again. All of Europe under one roof.’ The film version lives in the world of this theatre – with an impressive central set, designed by John Elphick and built on a sound-stage – and interpolates sequences of newsreel for an exterior of the theatre and glimpses of a ruined cityscape. It also adds a prologue with the army officer, Ridley, meeting Siobhan McKenna’s character, Marie, on the road to the town. Rebellato’s detailed analysis also facilitates a comparison between the original script and the way it was realised for the film, with the clearest differences coming at the end. The film closes with Dennis Price as Ridley, speaking over the body of the murdered Lili, laid out as if on an altar on the theatre’s stage, and staring into the lens to exhort the peoples of Europe to put aside their differences and to work together for the post-war peace.

The play appears to be a good deal more ambivalent. Lili has been murdered, off-stage rather than in the film’s explicit depiction, and the restless refugees, stirred up by the Communist Marie, are starting to turn against Ridley. Rebellato writes that the officer pleads for co-operation:

‘It can be done, you’ve seen it done! You worked together, you’re still the same people… There’ll be no shooting’. Immediately the stage direction announces ‘Shooting‘. The irony of this moment marks the final breakdown of the British claim to omniscience; they have become displaced persons. The end of the play is left open…

As is characteristic of the social problem film’s fusion of melodrama and didacticism, Lili’s sacrifice is necessary to restore order and subdue the rebellious elements. A female [Marie] is responsible for the upheaval; the victim is also a female, while the peacemaker is the British male lawgiver. The Lost People addresses a number of issues common to the social problem film: personal failure, the failure of conventional romantic relationships, and the ubiquitous threat of social conflict raised to the level of an international crisis. It attempt to create a sense of common purpose is overwhelmed by the massiveness of the conflicts that it poses.

The journal Contemporary European History has, under editor Jessica Reinisch, brought together, and made available as open access .pdfs, an exceptional group of contributions from historians about the Brexit crisis. I’ve been working my way through them, and learning from each one, but the one that especially resonated as I watched The Lost People is Anne Deighton’s ‘Brave New World? Brave Old World? She explores what she recognises is just one factor in a complex nexus of reasons for the 2016 vote, but makes a very strong case, as have others, that central to that catastrophic mistake (my words, not hers) was ‘the UK’s imperial and post-imperial inheritance since the Second World War’. As she writes:

Is it possible to pinpoint a moment in [the] complex double process of decolonisation, and the building of a new world and European order, that helps us understand 2016? I suggest that the years between 1948 and 1951 represent such a turning point. Decisions about a European or Empire/Commonwealth tilt in UK foreign policy, supranational institutions versus inter-governmental cooperation, domestic politics, project leadership, national autonomy, Anglo-Saxon values and the continental balance of power all came to a head during these critical years of decision making.

Among the events that Anne Deighton identifies from the start of these years were the stalling of the quasi-federal decision making system for the implementation of the American Marshall Aid assistance for western Europe and the sabotaging of the 1948 Council of Europe quasi-federal initiative, ‘so neutering the Council at birth’. Cockpit / The Lost People comes from exactly this moment, when the Attlee government set itself against even modest measures towards European integration, and Ridley’s plaintive words at the close seem to speak of both the hope that Europe might work together ever more closely and the acknowledgement that Britain, by her own choice, will be entirely marginal to whatever elements of that process can be achieved. It feels like a prescient, even a profound recognition of how history will play out over the next six decades and more.

Anne Deighton goes on to detail how – and why – in the summer of 1950 Britain rejected the Franco-West German Schuman Plan for the joint control of the coal and steel industries:

And why? Because the British, and especially the Foreign Office, believed that we could still pursue a global role through the former Empire, already much diminished and being rebranded as the Commonwealth. One final quote from Deighton (but do read the whole piece, as well as the other contributions to the Contemporary European History symposium):

Brexit will not in reality empower politicians to reconstruct a reimagined global past, while nostalgia provides only weak signposts for the future, beyond hubris.