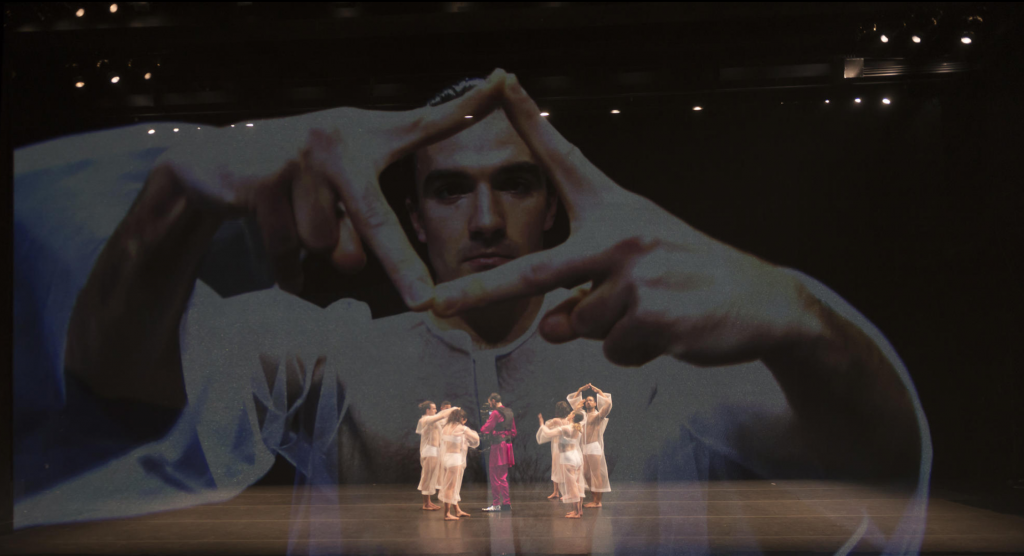 The first half of the show is a 3D film showcasing unremarkable dancing in a sequence of settings (with costumes to match) that suggested an Off-Off-Broadway show parodying American sci-fi movies of the 1950s. Nor was much made of the 3D technology, since the majority of the scenes were played parallel to the picture plane. I almost made my excuses and left, although during the interval the stage management comms conversations, about checking lights and focussing the projector, were played – presumably deliberately – through the theatre’s loudspeakers.

My concern was that this might be the most entertaining part of the evening, but I was pleased by elements of the second half, which was a live performance on an almost bare stage (very Merce) by six dancers and a Steadicam operator whose live shots were projected, with impressively little lag and at overwhelming scale, onto a scrim stretched across the front of the stage. The dancers were thus dancing with the camera in a very immediate manner, and the operator was skilfully and energetically moving himself and the lens through and around the bodies. The layering of small-scale dancers and large electronic images was striking and pleasing and at moments very beautiful.

The technique has been developed by years of collaborative working by Charles Atlas with Cunningham’s company and others. I found it especially interesting because it echoes the ways in which theatre makers including Ivo von Hove and Katie Mitchell use video on stage to create live streams within, and as an integral element of, stage performances. And this is an emerging practice which also links with the ways live multi-camera presentations of stagings are created for the likes of NT Live and RSC Live from Stratford-upon-Avon.

I am increasingly interested in exploring what is shared by these creative strands (which are rarely discussed in the same context). So it was intriguing, if not ultimately immensely satisfying, to see Tesseract’s exploration of bodies and cameras, live performance and live imaging, patterning and projection.