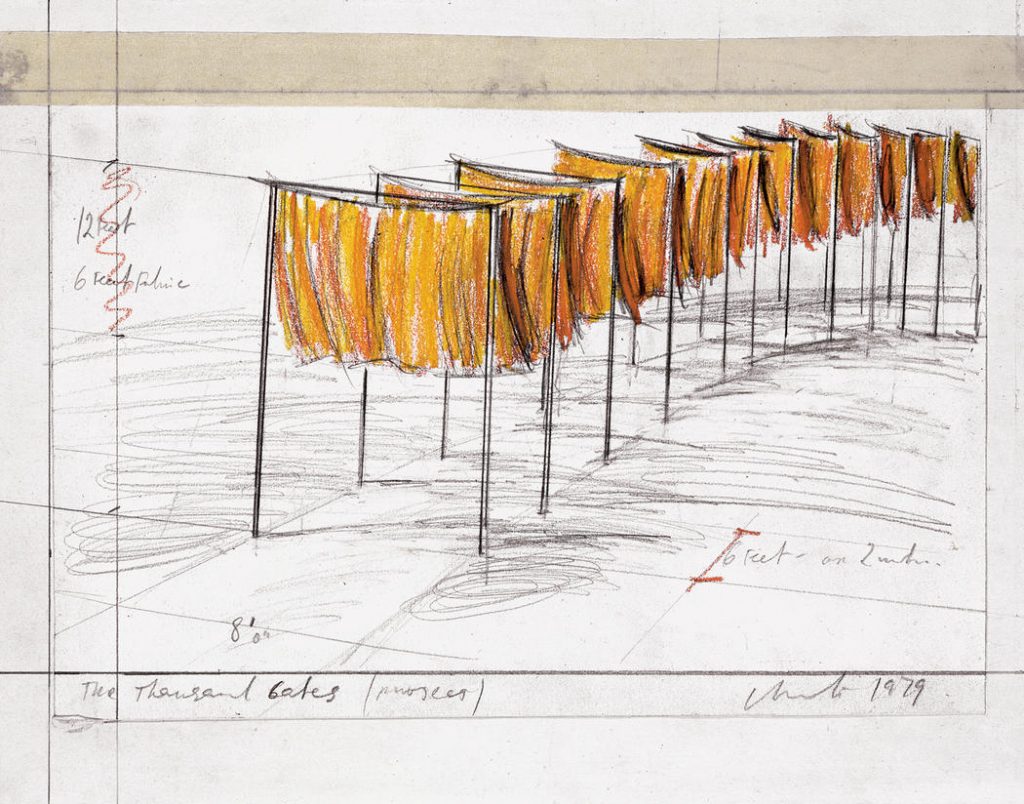 The artist, Christo Javacheff, passed away at the end of last month at the age of 84. Christo collaborated with his wife, Jeanne-Claude Denat de Guillebon, and they were credited in their work as Christo and Jeanne-Claude, a name he continued to use after her death in 2009. Both were born on the same day, “in the same moment”, as Christo put it, on June 13th 1935 in Bulgaria and Morrocco respectively. After moving from Bulgaria to Paris and finding himself broke, Christo became a street artist where he impressed the wife of a wealthy French general who invited him to paint her at her home. It was here he met her daughter, Jeanne-Claude.

Christo had become fascinated by a work May Ray had produced in the 1920s, of a sewing machine wrapped in a blanket, “The Enigma of Isidore Ducasse”. When Jeanne-Claude first entered the young Christo’s attic flat she encountered numerous household objects encased in wrapping. Initially thinking Christo was mad and then engaged to Philippe Planchon, she nevertheless left Planchon for Christo just three weeks later after she returned from her honeymoon, already pregnant with Christo’s child.

Jeanne-Claude appeared to have caught Christo’s ‘madness’ as she encouraged him to think bigger and the pair would then become famous for wrapping entire buildings in polypropylene, including the Reichstag, Pont Neuf in Paris, and the trees in the Beyeler Foundation and its nearby Berower Park. Both keen environmentalists, in 1983 they surrounded eleven islands in Biscayne Bay, Miami, with 6.5 million square feet of floating pink woven polypropylene.

Prior to his death, Christo and Jeanne-Claude had planned to wrap the Arc de Triomphe, which has been confirmed will still go ahead in September 2021.

In 1964 the pair moved to New York and it is here that Christo and Jeanne-Claude finally produced one of their most iconic works, The Gates. Inspired by Japanese Torri gates, in particular the tightly packed rows of Torri gates in the Fushimi Inari Shrine, Kyoto, Christo and Jeanne-Claude decorated Central Park with a “golden river” of 7,503 fabric-panelled gates. Initially conceived in 1979, it finally opened in February 2005, attracting 4 million visitors and costing $21 million as twenty-three miles of saffron-coloured vinyl gates decorated Central Park for just two weeks.

HBO co-produced the landmark Antonia Ferrera and Albert Maysles film, The Gates, which won a Peabody award in 2008. The film documented the 26 years it took for Christo and Jeanne-Claude to realise their idea for this substantial work. Recordings of their meetings and public hearings that spanned over four decades were woven together with stunning footage revealing how the winter darkness of Central Park was transformed by the play of light and colour of the saffron gates.

Christo and Jeanne-Claude claimed that there was no deeper meaning to their work outside its immediate aesthetic impact. For them, their art was intended simply to bring joy and beauty to the world. However, this assertation isn’t quite true because for Christo and Jeanne-Claude the process of bringing the work to fruition as part of the work itself, adds a layer of ‘depth’ that falls beyond sense experience. In this respect, The Gates, rather than being a detached documentary is instead both a part and an extension of the work itself, like a museum label contained within the frame of the painting it describes.

The Gates is avaliable on DVD here.