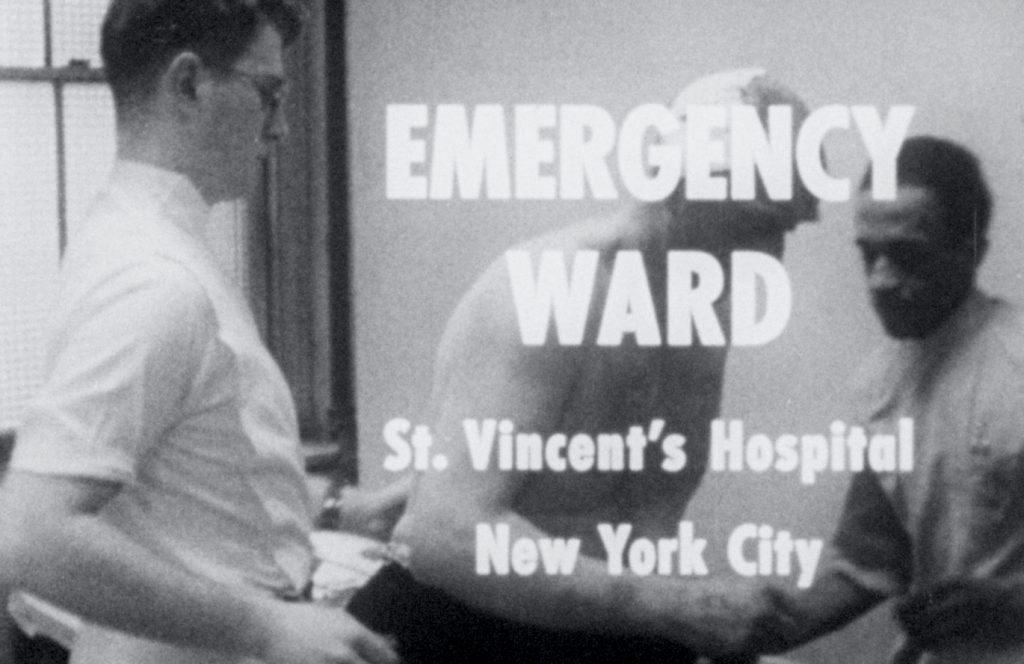 John Wyver writes: among the film treasures nearly accessible online is a digital restoration from the George Eastman Museum of Emergency Ward (1952), a remarkable documentary made at St Vincent’s Hospital, New York City. I had read about this precursor of the ‘direct cinema’ and cinema verité documentaries that emerged from the late 1950s onwards, but I’ve never before had the chance to see it. Slightly frustratingly, this Vimeo upload can’t be embedded elsewhere, but the film can be viewed here. (Peter Bagrov, Curator in Charge in the Moving Image Department of the George Eastman Museum, writes here about the institution’s new policy of making films available online.)

The 16-minute black-and-white film was shot in and around the receiving centre at St Vincent’s. Patients arrive in ambulances and are examined and treated by the medics. We see the doctors and nurses in the canteen, administrators at work, ambulance drivers relaxing. There is little drama and no sense of individual characters. In many of the shots it’s unclear what injury is being treated.

The images are prosaic, almost accidental, and only the loosest sense of narrative and structure has been imposed. The framing of the shots is casual, camera movement minimal. On the soundtrack we catch phrases of concern and reassurance, of casual, everyday speech, synchronised with the images and overlapped by expressions of pain and fear, and by sirens. The absence of both narrating voice and of music is striking. Nor is there really a beginning or an end. No resolution, no moral, just close-up, dispassionate observation of dedicated professionals doing what they do.

Yet how vivid and immediate it all seems. The film has a particular intimacy that suggests the quiet, personal address of early television rather than the heightened rhetoric of much post-war documentary filmmaking. Cinematography and sound recording on the film is credited to Fons Iannelli, while it is recognised as having been edited by Leo Hurwitz. The George Eastman Museum website explains the collaboration in this way:

Life magazine photographer Fons Iannelli developed a prototype portable, sync-sound film camera and recorder to make documentaries that would have the same kind of immediacy as the best photojournalism. Iannelli provided the raw footage he filmed at New York City’s St. Vincent’s Hospital to Leo Hurwitz, who turned it into a cohesive film. At that time, the legendary filmmaker was blacklisted and could only work incognito.

Apart from being an early example of cinema verité, of which more below, the film is fascinating as an intermedial link between illustrated magazines and factual filmmaking. Alfonso ‘Fons’ Ianelli (1917-1988) was the son of a noted designer and sculptor. Having apprenticed to the Chicago industrial photographer Gordon Coster, he set up a studio in 1940 before in 1942 being recruited by Edward Steichen into the Naval Aviation Photographic Unit. I’m indebted for this information to the website of the Steven Kasher Gallery that mounted an exhibition of Ianelli’s remarkable wartime images in 2017; see also the John Otis column for The New York Times, ‘Cameraderie in the US Navy’, a .pdf of which is available here.

After the war Ianelli became a highly successful photojournalist working for McCall’s, Life, Fortune and other illustrated magazines. Steven Kasher is quoted as saying, ‘You get a very strong sense of a photographer who was able to get into very close, intimate situations. Yet you don’t feel he changed or manipulated those situations.’ Which is exactly the quality he brought to his filming at St Vincent’s.

Ianelli was also fascinated by the technology of cameras and associated kit, developing systems for softer illumination in the field and for synchronising hand-held cameras with strobe lights. Around 1950 he started to work with the 16mm film cameras that began to be used widely during the war and he invented a system that mechanically interlocked a film camera and tape recorder. And it is this that he used to capture the striking images and sounds at St Vincent’s.

Leo Hurwitz was a famed documentary filmmaker in the 1930s, strongly associated with radical causes. He was one of the cinematographers on The Plow That Broke the Plains (1936) directed by Pare Lorentz, below, and co-director with Paul Strand of Native Land (1942), a study the exploitation of American worker which was narrated by Paul Robeson and with a musical score by Marc Blitzstein.

According to his 1991 New York Times obituary by Glenn Fowler:

In World War II Mr. Hurwitz worked on films for the Office of War Information, the British Information Service and other Government agencies. After the war, in the early days of commercial television, he was a producer-director and chief of news and special events for CBS television.

His radical views, however, led to him being black-listed in the early 1950s, which is when he collaborated, anonymously, on Emergency Ward. Once he was able to work under his own name again he directed the television coverage of the Adolf Eichmann trial in Jerusalem in 1961. (I am, however, mystified about where a BBC website found that he is ‘credited with inventing the multi-camera studio system’.)

The achievement of Emergency Ward convinced Richard Saudek, producer of the CBS series Omnibus, to hire the pair to make three further films, although only one was completed, The Young Fighter (1953). For more, see P J Grishar’s recent article for Forward, ‘How Leo Hurwitz, hounded by McCarthy, changed documentary film’, although this somewhat marginalises Ianelli’s contributions.

The subsequent history is complex, and somewhat contested, but it is clear that Life magazine writer and editor Robert Drew learned from both Emergency Ward and The Young Fighter as he developed the techniques of ‘direct cinema’ that he and collaborators created in the late 1950s. For more, see P J O’Connell’s 1992 book, Robert Drew and the Development of Cinema Verite in America and (for those with US-capable players, the exceptional Criterion DVD set The Kennedy Films of Robert Drew & Associates.

an unglamorized portrait of medical professionals doing their compassionate best to serve their community. Today, this film is a reminder of the lengths we ask our health care workers to go in order to provide the medical services we need.