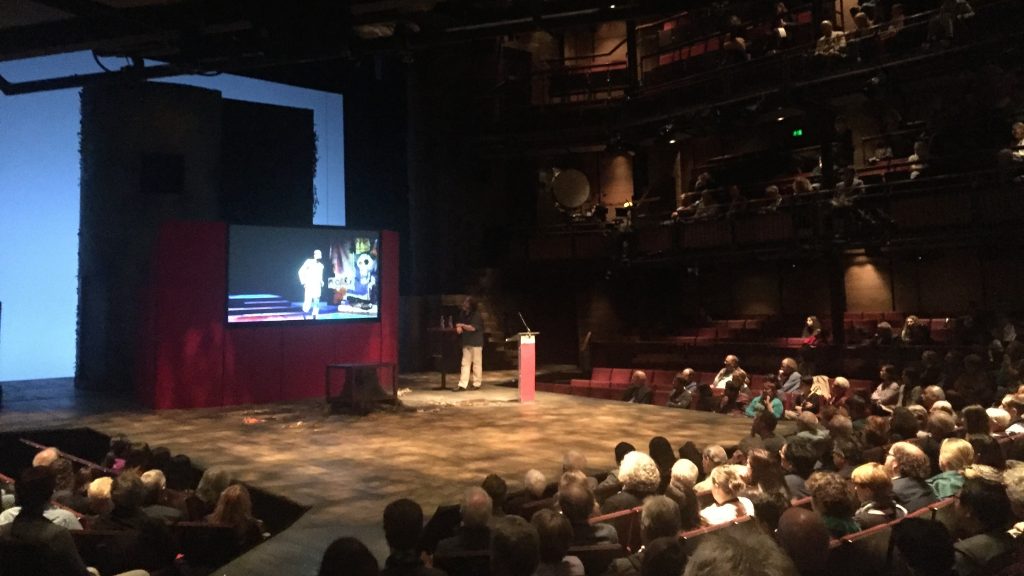 To Stratford-upon-Avon this week for the World Shakespeare Congress 2016, an international gathering of academics held only once every five years in a different location each time. This being the 400th anniversary of the playwright’s death, the eminent Shakespeareans have come to Britain for a week split between the birth place and the city where he worked. A full programme of lectures, panels, seminars and drinking lies ahead.

This morning RSC Artistic Director Gregory Doran got things off to a splendid start with a plenary lecture about screen adaptations of previous RSC productions, and showed a range of clips including fragments from The Wars of the Roses, 1965, and his 2000 Macbeth film with Tony Sher and Harriet Walter, both of which we publish on DVD. He also included part of the RSC Live from Stratford-upon-Avon cinema broadcast of Hamlet that came from here just under two months ago. Indeed the rather fuzzy picture above is of Paapa Essiedu performing ‘To be or not to be…’ on a screen mounted on the stage exactly where he gave the speech for the broadcast.

Which was really weird. Somehow it was if a ghost or a memory trace had appeared on the stage, or as if the reality that we were seated in was suddenly augmented by a figure that we all knew to be recorded but which still somehow seemed ‘live’. The effect was startling, a touch disquieting – and, given that I’d rehearsed the clips to check that the projection was working well – completely unexpected. Tomorrow, I’m taking part in a seminar about live cinema and Shakespeare, and perhaps the discussions there will help me begin to make sense a moment that felt truly rich and strange.